Occupy activist Cecily McMillan is behind bars, unlike any of the architects of the financial crisis. In an exclusive conversation with the Guardian, she explains why her sentence serves a purpose 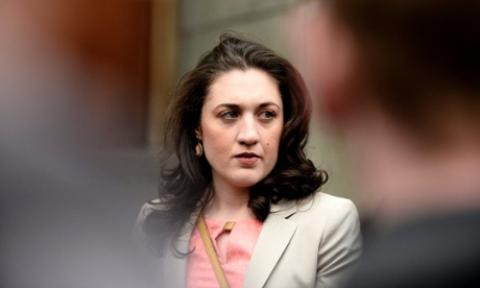 Cecily McMillan believes activists need to come out from behind their signs. ,Andrew Gombert/EPA

A former banker visits the only member of Occupy Wall Street to receive a prison sentence: it sounds like the set-up of a joke or a parable of the modern age. Instead, it was a real scene last Thursday, when I went to see jailed OWS activist Cecily McMillan at Rikers Island.

Rikers is New York City's largest jail, housing a population that is overwhelmingly poor – mostly people who can't post bail, which in some cases is as low as $50. It has become a short-term holding facility for those who can't muster $2,000 in a pinch, or who don't have the 10% of bail to lose to a bondsman.

Since her 19 May sentencing for an assault on an officer, Cecily McMillan has lived in a barracks-like room with close to a hundred other women. Cecily herself is a banker-like rarity in Rikers: she has resources, both from the media obsession with her case and the OWS movement that she has come to partly symbolize.

A one-hour visit requires hours of humiliating lines; scans, pat-downs and three separate body searches; emptying pockets of everything and then storing your wallet, your keys, your pills and your jewelry in tiny, coin-operated lockers. One half of an older couple, at Rikers to visit their daughter, encapsulated everyone's feelings: I ain't doing this again. I mean I love her, but this is just too much.

After four hours of waiting and screening, we got that hour with Cecily in a small room that resembles a kindergarten classroom – tiny tables, each with a large number in the center, are arrayed before a lifeguard’s chair from which a corrections officer overlooks the room. If a visitor gets too close to an inmate, the officer shouts at them: 18, NO TOUCHING. You touch again and your visit is over.

Children visiting their mothers and boyfriends visiting their girlfriends occupied the other tables while we were there. The frustration of the four hours all melted away in hugs – but each pairing was allowed only one hug, at the risk of a booming admonition: 19. I TOLD YOU. NO TOUCHING.

Cecily was exhausted and anxious, clad in the inmates' standard-issue gray jumpsuit, hers a size too large. She remains aware of her unique situation in the cut-off world of Rikers, and so she has spent much of the last month cataloguing the stories of injustice she sees daily.

I wanted to catalogue her experiences, too, but visitors aren't allowed to bring recording devices. I wanted to write down her exact words, but visitors aren't even allowed paper or pencils. So I came in my capacity as a former banker who has spent the last three years focusing on the injustices I have seen in my work with addiction. I came partially because I wanted to further understand the injustices that I, as a banker, might have helped create.

Cecily has spent most of the last month focused on trying to find a way to use her story to broaden her social activism, and to refocus the attention on her sentence to help people understand that incarceration is commonplace for many communities.   I had two years to prepare for this, she explained. Most everyone else in here had no time to prepare – but a lifetime of realizing it will happen to them at some point. Jail, and negative confrontations with the police, is for many a reality.

Being jailed has forced Cecily to rethink her prior approach toward activism, Activism, and activists, she explained, need to move into the communities they are working for. We have to get out from behind our books, our hand-painted signs, and really put ourselves at risk, she insisted.

She doesn't regret being the one who did end up in jail, she told me: It was going to happen to someone in the movement, the police were going to find someone to make an example of. And it just happened to be her.

But if a jail sentence is supposed to reform those unlucky or ill-fated enough to receive one, then the people who prosecuted Cecily aren't going to get their money's worth. I am far more committed to the movement, to social work, to exposing the power structures, than I was before, she explained.

In our hour, we didn't talk much about why more Occupy Wall Streeters faced criminal charges than the Wall Streeters they were protesting, or why, among her fellow inmates, she's more likely to meet someone victimized by a banker's malfeasance than an actual banker.

Why are no bankers in jail?

It is a question that I, as an ex-trader for Citigroup, still can't really answer (without sounding conspiratorial).

It is a question Cecily, as an activist behind bars, can't fully answer herself (without sounding too conspiratorial).

It's a question to which our own government hasn't provided us a satisfactory answer – and maybe never will.

It is a question that has certainly forced me to believe that the system is so rigged, maybe working within the system to change things is not the right approach.

The last three years, since leaving my job to document people living with addiction in the Bronx, since visiting more and more friends at Rikers, I have been made aware of the wide gulf that separates New Yorkers, and of a system that is so stacked against those with so much less. At every juncture, the criminal justice system seems to be kicking the poor in the teeth: they are the focus of more police activity, and their transgressions are magnified by rules that evolved to favor those with resources. The less money you have, the less power you have, and the greater chance your mistakes will be punished.

As Cecily said to me, and as I have said myself many times: Many people live with the knowledge that an involuntary trip to Rikers is a matter of when, not if.

Cecily is a reminder that the injustices run even deeper, and that they aren’t just confined to the poor. If you fight to expose injustice, then you might also face a system stacked against you.

Chris Arnade received his PhD in physics from Johns Hopkins University in 1992. He spent the next 20 years working as a trader on Wall Street. He left trading in 2012 to focus on photography. His "Faces of Addiction" series explores addiction in the south Bronx neighbourhood in New York City. Follow him on Twitter: @Chris_arnade