The Second Iran-Iraq War and the American Switch

In the looming second Iran-Iraq War, the US will be de facto allied with Iran against the would-be al-Qaeda affiliate (ISIS was rejected by core al-Qaeda for viciously attacking other militant vigilante Sunni fundamentalists in turf wars in Syria). In fact, since ISIS is allegedly bankrolled by private Salafi businessmen in Kuwait and elsewhere in the Oil Gulf, the US is on the opposite side of all its former allies of the 1980s. 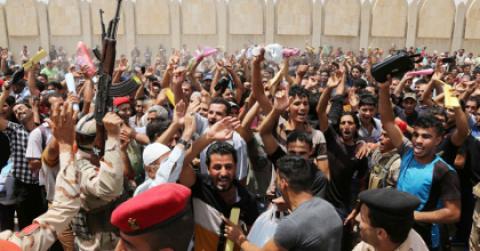 Young men in Baghdad chant slogans against the jihadists outside the main army recruiting centre yesterday, where they are volunteering to fight the extremist group., Credit: Karin Kadim/AP // The Independent

Iran has decided to intervene directly in Iraq and has already sent fighters to the front, according to the Wall Street Journal, based on Iranian sources. It is alleged that Iranian special forces have helped the Iraqi army push back in Tikrit, the birth place of Saddam Hussein that was overrun earlier this week by ISIS, which captured the city's police force. These reports come on the heels of President Hassan Rouhani's pledge on Thursday that Iran would not stand by and allow terrorists to take over Iraq. The hyper-Sunni Islamic State of Iraq and Syria fighters are closing in on a major Shiite shrine in Samarra and have pledge to take Baghdad, the capital, itself.

Iran has allegedly supplied small numbers of advisers and even hired Afghan fighters to the Syrian regime, and encouraged Lebanon's Hizbullah to intervene in Syria to prevent the fall of Homs to Sunni extremists. These Iranian interventions in Syria did shore up the al-Assad regime and reverse rebel momentum. Iran's Revolutionary Guards Corps may believe it can use the same tactics to roll back ISIS in Iraq. Iran is largely Shiite and has a Shiite religious ideology as the basis of the state. Iraq is 60% Shiite and the ruling government since 2005 has come from that community. Sunni Arabs in Iraq are probably only 17% or so, but had been the elite for most of Iraq's medieval and modern history, until George W. Bush overthrew the predominantly Sunni Saddam Hussein regime and allowed the Shiites to come to power.

Iraqi Shiites predominate in Baghdad and parts south. Shiites are more like traditional Catholics in venerating members of the holy family and attending at their shrines. Contemporary Salafi Sunni Islam is more like the militant brand of Protestantism of the late 1500s that denounced intermediaries between God and the individual and actually attacked and destroyed shrines to saints and other holy figures, where pleas for intercession were made. The shrine in Samarra is associated with the 12th in the line of vicars of the Prophet Muhammad, called Imams in Shi'ism, Muhammad al-Mahdi, a direct descendant of the Prophet himself. Shiites have a special emphasis on a millenarian expectation that the Twelfth Imam will soon return to restore justice to the world (rather as Christians believe in the return of Christ). When the Samarra shrine was damaged by Sunni militants in 2006, it threw Iraq into civil war, in which 3000 civilians were being killed every month. Baghdad was ethnically cleansed by 2008 of most of its Sunnis, becoming a largely Shiite capital. ISIS wants to reverse that process. Baghdad was founded by the Abbasid caliphate, who claimed to be vicars of the Prophet, in 762 AD and is a symbol of the glories of early Islam. ISIS leaders are threatening also to destroy the shrine of Ali in Najaf and the shrine of Husain in Karbala (Najaf for Shiites is the equivalent of the Basilica of St. Peter for Catholics).

The specter of Iranian troops on Iraqi soil can only recall the first Iran-Iraq War.

From September of 1980, when Saddam Hussein's Iraqi army invaded Iran's oil-rich Khuzistan Province, until summer 1988 when Ayatollah Khomeini finally accepted an armistice, Iran and Iraq fought one of the Middle East's longest and bloodiest wars. Its trench warfare and hidden naval encounters recalled the horrors of World War I, as did the Iraqi Baath government's deployment of mustard gas against Iranian soldiers at the front and sarin gas against Kurdish civilians suspected of pro-Iranian sentiments.

The Reagan administration in the United States largely backed Iraq from 1983, when Reagan dispatched then Searle CEO Donald Rumsfeld to shake Saddam's hand. This, despite Iraq being the clear aggressor and despite Reagan's full knowledge of Iraqi use of chemical weapons, about which George Schultz at the State Department loudly complained until he was shushed. Then, having his marching orders straight, Schultz had the US ambassador to the UN deep-six any UN Security Council resolution condemning Iraq for the chemical weapons deployment. The US navy fought an behind the scenes war against Iranian ships in the Persian Gulf, becoming a de facto appendage of the Baath military.

Just because the Reagan administration was so Machiavellian, it also gave some minor support Iran in the war. Reagan stole anti-tank and anti-aircraft weaponry from the Pentagon storehouses and illegally sold them to Khomeini despite Iran being on the US terrorism watch list. He then had Iran pressure the Shiite militiamen in Lebanon to release American hostages. Reagan sent the money received from Iran to death squads in Nicaragua fighting the people's revolution there against a brutal American-installed dictatorship. This money was sent to Nicaragua in defiance of the Boland Amendment passed by Congress forbidding US monies to go there. Ollie North, whom you see prevaricating on Fox News these days, was a bag man for the operation.

They may as well have broken into the National Archives Nick Cage style, broken out the original copy of the constitution, and put it through a shredder several times in a row till small confetti pieces were all that were left.

It is unclear how many people Saddam's bloody war killed off. A quarter of a million on each side seems plausible. So many young men were part of a "missing generation" that the Iranian regime had to let women into the workforce and universities in very large numbers despite its preference for them to remain home and secluded. In Iraq, there were many widows, and some were forced to become low-status second wives, or single heads of household, or, among Shiites, temporary wives. Iraq depleted its currency reserves in the war and went into debt with Kuwait among others, then in 1990 invaded and tried to annex Kuwait. Saddam dealt with his creditors the way organized crime might deal with its.

In the looming second Iran-Iraq War, the US will be de facto allied with Iran against the would-be al-Qaeda affiliate (ISIS was rejected by core al-Qaeda for viciously attacking other militant vigilante Sunni fundamentalists in turf wars in Syria). The position of the US is therefore 180 degrees away from what it was under Reagan.

In fact, since ISIS is allegedly bankrolled by private Salafi businessmen in Kuwait and elsewhere in the Oil Gulf, the US is on the opposite side of all its former allies of the 1980s. In some ways, some of the alleged stagnation of US policy in the Middle East may derive from a de facto US switch to the Iranian side on most issues, at the same time that US rhetoric supports Iran's enemies in Syria and elsewhere in the region.

It is possible that a US-Iran alliance against al-Qaeda-like groups in Iraq and Syria could clarify their budding new relationship and lead to a tectonic shift in US policy in the Middle East. The Indeed, Reuters says Iranian officials are offering the possibility of security cooperation with the us. One things seems clear. Without Iran, the US is unlikely to be able to roll by al-Qaeda affiliates and would-be affiliates in the Fertile Crescent, who ultimately could pose a danger to US interests.

[Juan Cole is Richard P. Mitchell Collegiate Professor of History at the University of Michigan. For three decades, he has sought to put the relationship of the West and the Muslim world in historical context. His most recent work is The New Arabs: How the Wired and Global Youth of the Middle East Is Transforming It (Simon & Schuster, June, 2014). Engaging the Muslim World (Palgrave Macmillan, March, 2009, rev. 2010) and he also authored Napoleon's Egypt: Invading the Middle East (Palgrave Macmillan, 2007). He has been a regular guest on PBS's Lehrer News Hour, and has also appeared on ABC Nightly News, Nightline, the Today Show, Charlie Rose, Anderson Cooper 360, Countdown with Keith Olbermann, Rachel Maddow, the Colbert Report, Democracy Now! and many others. He has given many radio and press interviews. He has written widely about Egypt, Iran, Iraq, and South Asia. He has commented extensively on al-Qaeda and the Taliban, the Iraq War, the politics of Pakistan and Afghanistan, and Iranian domestic struggles and foreign affairs. He has a regular column at Truthdig. He continues to study and write about contemporary Islamic movements, whether mainstream or radical, whether Sunni and Salafi or Shi`ite. Cole commands Arabic, Persian and Urdu and reads some Turkish, knows both Middle Eastern and South Asian Islam. He lived in various parts of the Muslim world for nearly 10 years, and continues to travel widely there. A bibliography of his writings may be found here. ]