On this Father’s Day: an examination of the wages of male workers at the prime age for raising young children. 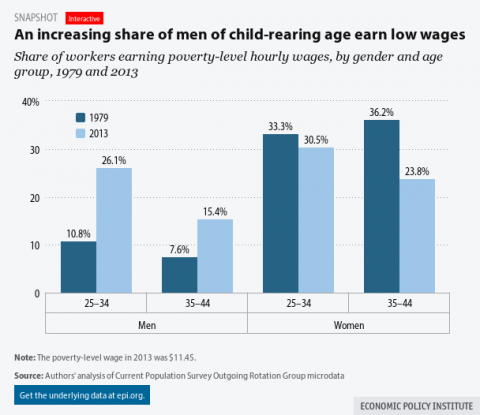 In honor of Father’s Day, we looked at the wages of male workers at the prime age for raising young children. While women have always been more likely to earn poverty-level wages than men (wages less than what a full-time, year-round worker needs to sustain a family of four at the official poverty threshold), women have seen some improvement over the last three-and-a-half decades, as their rates of poverty-level wages have declined, especially among those 35 to 44 years old.

On the other hand, men between 25 and 44 have seen precipitous increases in the share working at such low wages, with the share more than doubling between 1979 and 2013. This trend has been particularly stark among the younger age group. The figure below shows the share of male and female workers between 25 and 34 and between 35 and 44 years old who earn poverty-level wages. In 2013, that hourly wage was $11.49. Over one-fourth of men 25-34 years old earned poverty-level wages in 2013.

The bottom line is there are a great many adults, and an increasing share of men, stuck in very low-paying jobs, and they are the same people who are responsible for raising the next generation.

Rather than confront poverty by extending jobless benefits to the long-term unemployed, endorsing a higher minimum wage, or supporting jobs programs, conservative Republicans are taking a different tack.

They're peddling three big lies about poverty. To wit:

Wrong. Since the late 1970s, the economy has grown 147 percent per capita but almost nothing has trickled down. The typical American worker is earning just about what he or she earned three decades ago, adjusted for inflation.

Meanwhile, the share of Americans in poverty remains around 15 percent. That's even higher than it was in the early 1970s.

How can the economy have grown so much while most people's wages go nowhere and the poor remain poor? Because almost all the gains have gone to the top.

Research by Immanuel Saez and Thomas Piketty shows that forty years ago the richest 1 percent of Americans got 9 percent of total income. Today they get over 20 percent.

It's true that redistributing income to the needy is politically easier in a growing economy than in a stagnant one. One reason so many in today's middle class are reluctant to pay taxes to help the poor is their own incomes are dropping.

But the lesson we should have learned from the past three decades is economic growth by itself doesn't reduce poverty.

Senator Marco Rubio said poverty is best addressed not by raising the minimum wage or giving the poor more assistance but with "reforms that encourage and reward work."

This has been the standard Republican line ever since Ronald Reagan declared that the best social program is a job. A number of Democrats have adopted it as well. But it's wrong.

Surely it's better to be poor and working than to be poor and unemployed. Evidence suggests jobs are crucial not only to economic well-being but also to self-esteem. Long-term unemployment can even shorten life expectancy.

But simply having a job is no bulwark against poverty. In fact, across America the ranks of the working poor have been growing. Around one-fourth of all American workers are now in jobs paying below what a full-time, full-year worker needs in order to live above the federally defined poverty line for a family of four.

Why are more people working but still poor? First of all, more jobs pay lousy wages.

While low-paying industries such as retail and fast food accounted for 22 percent of the jobs lost in the Great Recession, they've generated 44 percent of the jobs added since then, according to a recent report from the National Employment Law Project.

Bill Clinton's welfare reform of 1996 pushed the poor into jobs, but they've been mostly low-wage jobs without ladders into the middle class. The Earned Income Tax Credit, a wage subsidy, has been expanded, but you have to be working in order to qualify.

Work requirements haven't reduced the number or percent of Americans in poverty. They've merely increased the number of working poor - a term that should be an oxymoron.

Most Republicans, unlike Democrats and independents, believe people are poor mainly because of a lack of effort, according to a Pew Research Center/USA Today survey. It's a standard riff of the right: If the poor were more ambitious they wouldn't be poor.

Obviously, personal responsibility is important. But there's no evidence that people who are poor are less ambitious than anyone else. In fact, many work long hours at backbreaking jobs.

What they really lack is opportunity. It begins with lousy schools.

America is one of only three advanced countries that spends less on the education of poorer children than richer ones, according to a study by the Organization for Economic Cooperation and Development.

So why do so many right-wing Republicans tell these three lies? Because they make it almost impossible to focus on what the poor really need - good-paying jobs, adequate safety nets, and excellent schools.