As democratic enterprises, coops are more than one piece of an economic development model. They give workers more control over their work environment, and their capacity for democratic participation in the wider world is enriched. 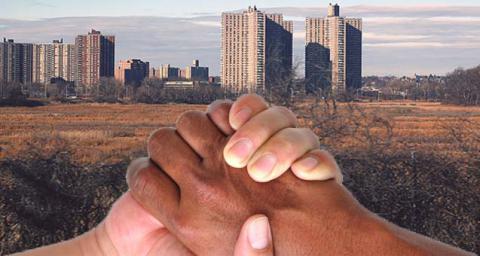 Worker Cooperatives are designed to help build assets and wealth among low-income individuals and communities, and create entrepreneurs and community leaders.,Jay Gorman, Shaking hands via Shutterstock; Edited: EL / TO

A quiet revolution is rumbling through New York's municipal offices as they retool to support the creation of worker cooperatives as a way to fight poverty.

Spurred by the powerful example of immigrant-owned cleaning cooperatives and the longstanding example of Cooperative Home Care Associates in the Bronx - the largest worker cooperative in the country - progressive city council members are allying with a new network of worker cooperatives, community based organizations that incubated immigrant-owned coops and the influential Federation of Protestant Welfare Agencies to figure out how the city can encourage this still-tiny economic sector. Once fully in place, New York City will be a national leader in providing municipal support for these democratic enterprises.

Worker Cooperatives are designed to help build assets and wealth among low-income individuals and communities, and create entrepreneurs and community leaders.

The pace of change is dizzying. In January, the federation released a short report arguing that worker coops help improve traditionally low-wage jobs by channeling the enterprises' profits directly to their worker members, improving their lives in tangible ways. Then in February, Councilwoman Maria del Carmen Arroyo, chairwoman of the Committee on Community Development, held a hearing which put staff from the city's Small Business Services and Economic Development Agency in the hot seat about how they were promoting worker cooperatives. In their final budget agreement on June 19th, the mayor agreed to the City Council's request for $1.2 million for training programs with the aim of incubating a minimum of 234 new jobs, 28 new worker coops and help another 20 existing worker cooperatives to grow.

"We got it. the whole thing, we are so excited and thankful to the City Council, the mayor, the public advocate and borough president for their support for workplace democracy" said Chris Michael, director of the NYC Netwrork of Worker Cooperatives.

In making the budget appeal, the City Council wrote, "Often times minimum- and low-wage jobs do not provide enough of an economic boost to provide upward mobility for many New Yorkers. Worker Cooperatives are designed to help build assets and wealth among low-income individuals and communities, and create entrepreneurs and community leaders."

It continued, "This initiative will target the long-term unemployed and the growing number of under- employed and discouraged workers in high-needs neighborhoods."

Worker coops are businesses that distribute more of the profits to employees because the worker-owners control the operation on the basis of one member, one vote. More than a third in the United States are in the service sector and are relatively small. They may operate with a staff hierarchy but even in larger coops the wage scale is relatively egalitarian. The businesses’ surplus gets circulated to the member-workers, not to external shareholders, as in traditional corporations.

The possibility of empowering low-wage workers inspires Rosie Mendez, a city councilwoman representing the East Village, including Colors, the restaurant coop formed by former staffers of Windows on the World in the World Trade Center. "It would go a long way to eradicating unemployment and strengthening our workforce," she said following the May 14 rally on the city hall steps.

Activists flyered in front of the City Council to promote the funding, winning an offhand remark from a passing Mayor DeBlasio that he "loves worker coops"!

At the national conference of the US Federation of Worker Cooperatives in late May, executive director Melissa Hoover acknowledged the importance of strong allies to promote the vital public policy changes needed for growth, given the small number of the democratic enterprises - there are perhaps 300 worker coops in the entire country. Twenty-three of them are in New York City, and with coop incubators like the Center for Family Life in Brooklyn, they are much more likely to be immigrant-run than those in some other coop centers, such as Minnesota, Massachusetts or Wisconsin. (The SF Bay area, with two dozen enterprises, is also home to prominent immigrant-owned coops and the coop incubator WAGES.) While the Bay area, Madison and Western Massachusetts all have coop networks, the NYC Network of Worker Cooperatives is only holding its first conference June 21. It can't carry the weight of a full lobbying effort. This makes the interest of the Federation of Protestant Welfare Agencies (FPWA) in worker coops particularly notable.

While researchers try to connect the dots about the power of worker coops as poverty fighters, they are faced with relatively thin data because of the low numbers of the enterprises in this country.

The 92-year-old organization is a network of social service agencies and churches led by Jennifer Jones Austin, a well-connected New Yorker who cochaired Mayor DeBlasio's transition team and who once served in the Bloomberg administration. She had been executive director of FPWA just over a year when it released its report on worker coops. Its author, research director Noah Franklin, made the connection between worker coops and fighting poverty at the January conference marking its release. "Why are we advocating for worker cooperatives now?" he asked. "More than 20 percent of New Yorkers are living in poverty." He added, "Business hiring trends have only added to the ranks of low-wage workers" - despite the usual city giveaways to big companies in the name of job creation. Here is a "policy misalignment." But as democratic enterprises, coops are more than one piece of an economic development model. They give workers more control over their work environment, and their capacity for democratic participation in the wider world is enriched.