Whole Foods has attempted to crush anything resembling a union drive among its employees. In two Chicago stores, workers have staged wildcat strikes and walkouts to protest what they say are draconian attendance policies and unfair dismissals of workers. 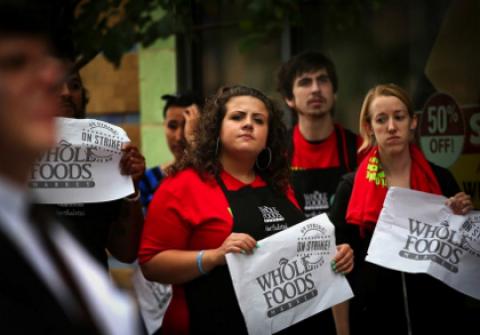 Rhiannon Broschat, center, was fired after staying home to care for her special-needs son during a snow day., Scott Olson / Getty Images // In These Times

Don't look now, but Whole Foods seems to be interpreting the "whole planet" part of its corporate branding as a Manifest Destiny-style call to market conquest. In an exhaustive Fortune magazine cover story this April, "Whole Foods Takes Over America," Beth Kowitt explained that the high-end grocer has quietly bulked up into one of America's leading retail food chains, with plans to operate 1,200 stores over the next few years (counting stores in the UK and Canada). The chain has seen its revenues double and its profits triple since 2007, Kowitt reports, and has lately taken to launching new stores in low-income shopping areas, such as Detroit, Newark and the South Side of Chicago.

On one level, it's heartening that more choices to purchase quality, non-industrial food have penetrated into lower-income neighborhoods. However, Whole Foods is far from a model of progressive values. Founded and run by John Mackey, a recovered hippie and especially dogmatic libertarian in the Randian grain, the chain has notoriously lowballed health benefits and campaigned to crush anything resembling a union organizing drive among its more than 70,000 employees. "The union is like having herpes," organic baron Mackey infamously announced. "It doesn't kill you, but it's unpleasant and inconvenient, and it stops a lot of people from becoming your lover."

Lately, however, aggrieved Whole Foods employees have been fighting back against the company's crude anti-union calumnies. In two Chicago stores, workers have staged wildcat strikes and walkouts to protest what they say are draconian attendance policies and unfair dismissals of workers. In one high-profile action in February, front-end cashiers and customer service crew at one Whole Foods walked out to protest the firing of a single mother who had missed work to care for her son after the polar vortex forced public schools to close.

One of the lead organizers in Chicago has been Trish Kahle, a history graduate student at the University of Chicago who began working at the Lincoln Park Whole Foods in March of 2012. Kahle quit her job this past winter when, as she explains, she had several work absences arising from a bicycling accident. To return to work, she would have had to present a doctor's note, but she could not afford a doctor's appointment - she hadn't been able to afford the company health insurance plan because of its high out-of-pocket costs.

Though she no longer works for Whole Foods, Kahle is still pushing for union recognition there, in conjunction with Chicago's Fight for 15 campaign, which is seeking a citywide living wage of $15 an hour and the right to form unions without retaliation. But while the workers in Chicago have won some qualified victories, like time off for Thanksgiving, the specter of a management crackdown is ever-present. Several workers charge that four employees at the Boystown store were dismissed for their union activities, although the store gave the workers other reasons. (Whole Foods did not respond to a request for comment.)

These bracing stories strike a dissonant note in Whole Foods' branding as a shop that caters to the compassionate social sensibilities of the enlightened food consumer. Still, just as Upton Sinclair's 1906 exposé of Chicago's meat-packing industry, The Jungle, helped launch the federal regime of food safety enforcement, so might today's Chicago uprising in the heart of the fair-trade consumer revolution create some long-overdue consciousness-raising in the food-buying public, which has tended to uncritically accept the Whole Foods company line that a union would drive its already pricey offerings higher still.

One of the store's pet designations for its lovingly curated foodstuffs is "artisanal" - which, in terms of labor history, unwittingly aligns the store's stock displays with the skilled workers who founded the first medieval guilds that would later serve as models for mass unionism. So next time you're shelling out a small fortune for a bag full of exotic produce and hand-crafted cheeses, let the store's management know that a real artisanal store experience would include collective bargaining rights for the company's workforce.

[Chris Lehmann, is a contributing editor of In These Times,  an editor of Book Forum and the Baffler and the author of Rich People Things (Haymarket, 2011). He is now working on a book about American religion and the money culture.]