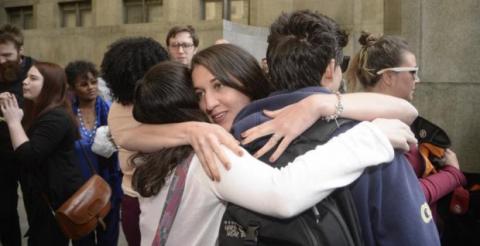 Cecily McMillan being greeting by supporters on her release from Rikers Island prison., The Sparrow Project

[This was the first time she was able to speak publicly after testifying in her trial. Cecily's controversial trial garnered international media attention. She was supported by elected officials, community leaders, and celebrities. While serving her term at Rikers Island she was visited by members of Russian rock group Pussy Riot, themselves unjustly imprisoned in 2012.]

The Following is Cecily's Statement as read to members of the press at 1pm EST:

"Fifty nine days ago, The City and State of New York labeled me a criminal. Millionaires and billionaires - who had a vested interest in silencing a peaceful protest about the growing inequalities in America - coerced the justice system, manipulated the evidence, and suddenly I became dangerous and distinguished from law-abiding citizens. On May 5th, the jury delivered its verdict, the judge deemed me undesirable, and officers drove me across that bridge and barred me within. On the outside, I had spent my time fighting for freedom and rights. On the inside, I discovered a world where words like freedom and rights don't even exist in the first place. I walked in with one movement, and return to you a representative of another. That bridge right there, that divides the city from Rikers Island, divides two worlds - today I hope to bring them closer together. Crossing back over, I have a message to you from several concerned citizens currently serving time at the Rose M. Singer Center.

"Incarceration is meant to prevent crime. Its purpose is to penalize and then return us to the outside world ready to start anew. The world I saw at Rikers isn't concerned with that. Many of the tactics employed are aimed at simple dehumanization. In the interests of returning the facility to its mission and restoring dignity to its inmates, we, the women of Rikers, have several demands that will make this system more functional. These were collectively drafted for me to read before you today.

"First of all, we demand that we be provided with adequate, safe, and timely healthcare at all times. That, of course, includes mental health care services and the ability to request female doctors if desired at all times for safety and comfort. We often have to wait for up to 12 hours a day for a simple clinic visit, and occasionally 12 hours a day for up to a full week before we see anyone.

"The women of Rikers feel a special sense of urgency for this demand because of a particular event that occurred recently. About a week ago, our friend Judith died as a result of inadequate medical care. Judith had been in RSMC for a while, but was transferred to our dorm 4 East A, where I was housed, only a few days before her death. She had recently been in the infirmary for a back problem, and had been prescribed methadone pills for the pain for quite a while. A few days before she died, they decided to change the medicine to liquid despite her dissent. They gave her a dosage of 190mg, which any doctor will tell you is a dangerous dosage, far higher than what anyone should be taking unless it is a serious emergency. Judith was not allowed to turn down the medicine or visit the clinic to get the dosage adjusted.

"After three days on that dosage, Judith could no longer remember who or where she was and had begun coughing up blood, accompanied with what we believe were chunks of her liver. We attempted unsuccessfully to get her medical treatment for the entire day, at one point being told that this was "not an emergency," despite the fact that Judith was covered in blood. That night they finally removed her to the hospital, where she remained in critical condition before passing away a few days later. This was a clear case of medical malpractice, both with the ridiculously high dosage of methadone and the refusal of adequate treatment. Stories like this are far too common in Rikers Island, and we demand that no more of our sisters be lost to sickness and disease as a result of inadequate medical care.

"Our next demand is that Corrections Officers should be required to follow the protocol laid out for them at all times, and that at some point soon that protocol should be examined to make sure that all rules and procedures are in the best interests of the inmates. We also demand that we have a clear and direct means to file a grievance that will be taken seriously and examined fully, so that Officers can be properly disciplined and removed from the area quickly when they abuse or endanger us.

"Recently my friend Alejandra went to file a grievance about being denied access to medical treatment for a concussion until she awoke one morning unable to move. When she met with the captain after filing the grievance, she was presented with a different sheet and a different complaint than the one she had provided and was forced to sign it. Inmates should be able to trust that situations like that will not concern, and that our safety and dignity be respected by those designated to supervise us. There is a clear protocol for officers already laid out in the inmate handbook, but it is seldom followed. Officers are allowed to make up the rules as they go and get away with it, which we find unacceptable.

"Our final demand is that we be provided with rehabilitative and educational services that will help us to heal our addictions and gain new skills, and that will make it much easier for us to adjust to the outside and achieve employment when we are released. Specifically, for our education we would like access to classes beyond GED completion, maintenance, and basic computer skills, access to a library, and English classes for those attempting to learn the language. We feel that the addition of these programs would significantly help us prepare for release and reentry into the world, which would lower re-incarceration rates.

"We also feel strongly that Rikers Island needs to have much better drug rehabilitation programs. Many women who come through here are addicts, and many women are imprisoned here because they are addicts. That's the area in which reentry rates seems to be the highest. This is likely a direct result of the failure of the meager programs that we are given. Thus, it seems only logical that serious and effective drug rehabilitation programs be provided to those who need them, assuming that the Department of Corrections would like to help work to achieve a better, healthier society and keep as many people as possible out of jail.

"Working with my sisters to organize for change in the confines of jail has strengthened my belief in participatory democracy and collective action. I am inspired by the resilient community I have encountered in a system that is stacked against us. The only difference between people we call "law-abiding" citizens and the women I served time with is the unequal access to resources. Crossing the bridge I am compelled to reach back and recognize the two worlds as undivided. The court sent me here to frighten me and others into silencing our dissent, but I am proud to walk out saying that the 99% is, in fact, stronger than ever. We will continue to fight until we gain all the rights we deserve as citizens of this earth."

[Cecily McMillan is a New York City activist and graduate student wrongfully imprisoned for felony assault of a police officer after an incident at an Occupy Wall Street event on March 17, 2012. Officer Grantley Bovell grabbed her right breast from behind and lifted her into the air, at which other officers joined Officer Bovell in beating McMillan until she had a series of seizures. She was convicted on May 5th after a trial in which Judge Ronald Zweibel disallowed key pieces of evidence from the defense. On May 19th she was sentenced to a 90-day sentence and 5 years of probation after a large public campaign for leniency, which included an appeal to the judge signed by 9 of the 12 jurors, who thought she should be given no further jail time. The sentence on this charge is typically a term of 2-7 years of incarceration.]