The families of murdered Israeli teen Naftali Fraenkel and murdered Palestinian teen Mohammed Abu Khdeir are drawing comfort from an unexpected source: each other. 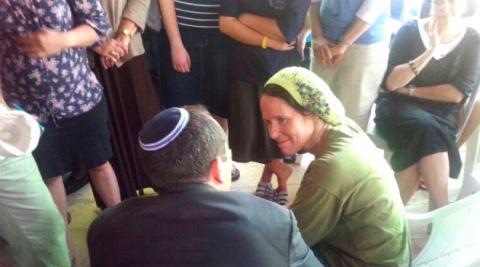 The families of murdered Israeli teen Naftali Fraenkel and murdered Palestinian teen Mohammed Abu Khdeir are drawing comfort from an unexpected source: each other.

Jerusalem mayor Nir Barkat took to Facebook on Sunday to write about an “emotional and special telephone conversation between two families that have lost their sons.” He said that during his visit to the Fraenkel family home, he had a chance to speak to Hussein Abu Khdeir, Mohammed’s father, and express pain at the “barbaric” murder of his son.

Barkat then suggested that Abu Khdeir speak to Yishai Fraenkel, the uncle of Naftali Fraenkel who recently told the press that “the life of an Arab is equally precious to that of a Jew. Blood is blood, and murder is murder, whether that murder is Jewish or Arab.” The two men took Barkat’s advice and comforted one another by telephone.

In a separate visit organized by Rabbi Rafi Ostroff, chair of the religious council of Gush Etzion, Palestinians from the Hebron area showed up at the door of the Fraenkel family, looking to comfort the bereaved.

Asked why they had come, one Palestinian said, “Things will only get better when we learn to cope with each other’s pain and stop getting angry at each other. Our task is to give strength to the family and also to take a step toward my nation’s liberation. We believe that the way to our liberation is through the hearts of Jews.”

He later said that the visit went very well from his perspective. “They received us very, very nicely. The mother [Rachel Fraenkel] was incredible.”

“I see before me a Jewish family who has lost a son opening the door to me,” he added. “That’s not obvious. It touched my heart and my nation.”

The Palestinian visitors also mentioned an initiative spearheaded by Jews and Muslims to transform July 15, the Jewish fast day known as 17 Tammuz, into a joint fast day for people of both religions who wish to express their desire to end violence in the region.