Why Opposing the Israel Lobby Is No Longer Political Suicide

July 16, 2014 by Phyllis Bennis The Nation
Printer friendly
Why Opposing the Israel Lobby Is No Longer Political Suicide Published July 16, 2014 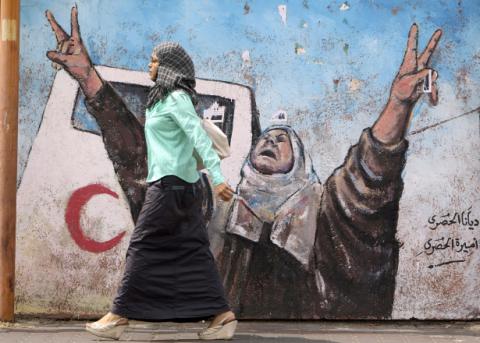 A woman walks past a mural in Gaza City ,(Reuters/Mohammed Salem)

With the collapse of an Egyptian cease-fire proposal, the horror of Israel’s latest Gaza assault continues. At least 185 have been killed, almost 80 percent of them civilians. Almost half are women and children. At least seventy homes were specifically targeted and destroyed. Five healthcare facilities, including a hospital, have been damaged in air strikes. There was a direct attack on a center for profoundly disabled people. It was one of Israel’s much-bragged-about “carefully targeted” bombings, including the now-iconic “knock on the roof” message from the Israeli bombers—the small bomb that signals much worse to come. It wasn’t an accident. Three people, two patients and a caregiver, were killed there. It goes on.

And Congress—indeed almost all of official Washington—is speaking with almost one voice: We stand with Israel. Israel has the right to “defend” itself. No country would stand by and allow this. But something is different this time. And not only that the assault is different, and worse.

The difference is the political environment in which this attack is happening, especially the political environment here in the United States. For those of us who’ve been working on changing US policy in the Middle East for decades, the bad news is in front of us every day: that policy hasn’t changed, and billions of dollars in aid money and uncritical political, diplomatic and military support for Israel remains constant.

But there is some good news. It’s only obvious when you can back up for a moment to look past the daily bad-news reality. The good news is that the discourse has shifted dramatically—in mainstream news coverage, punditry, pop culture and more. It's much better than ever. They don’t get it right, still, but things are changing. Twelve years ago, during the siege of Yasir Arafat’s compound in Ramallah and the surrounding of the Church of the Nativity in Bethlehem, we didn’t hear many Palestinian voices in the mainstream press. In 2006, during Israel’s attack on Gaza, The New York Times and NPR didn’t send their reporters to the Khan Younis refugee camp or to Gaza City.

But the coverage had already begun to shift during Cast Lead, the three-week Israeli war against Gaza in 2008–09, and we realized then how much the media changes reflected the overall discourse shift. Despite Israeli efforts to exclude the international press, Al Jazeera and other Arabic channels were broadcasting live out of Gaza. The Times had a terrific young stringer, Taghreed el-Khodary, filing hour by hour. Israel probably wouldn’t have allowed her into the Strip, but they couldn’t stop her, she was already there—born and raised in Gaza and living with her family.

Most importantly, cellphones and computers were already ubiquitous, even in impoverished Gaza refugee camps. So when the electricity flicked on for an hour or two, the first thing people did was to power up their phones so they could send their photographs, videos, stories and heartbreak out into the world. It transformed how we understand what an occupation looks like, what a siege does to a town, what white phosphorous bombs look like when they hit a school.

These messages haven’t reached everyone in the United States, and not all those it has reached have shifted their opinion. But the new discourse has changed an awful lot of minds. Polls have a limited value—at best they’re a snapshot, a moment in time. But think about this one: It’s the summer of 2010, President Obama is disagreeing with Israeli Prime Minister Netanyahu (itself a reflection of a changing political assumption) on settlements in the occupied territories. The press coverage falsely claims the United States is pressuring Israel, which amounted to a series of polite requests: Please stop building new settlements. When Israel said no a few times, the questions stopped. At that moment, a Zogby poll asked people to choose a statement that reflected their view of settlements. Sixty-three percent of Democrats—President Obama’s own party and until not too long ago the main party of support for Israel—chose the statement that read “Israeli settlements are built on land confiscated from Palestinians and should be torn down and the land returned to Palestinian owners.” A snapshot in time, maybe. But still—63 percent!

Organizations like the US Campaign to End the Israeli Occupation and Jewish Voice for Peace have both taken advantage of and pushed forward this discourse shift. The real challenge now is how to use this change, how to use the near-normalization of criticism of Israel to broaden the work, to engage with organizations and institutions and—gasp!—even members of Congress who have never touched this issue before and who still assume it’s political suicide to criticize Israel. We know now it certainly isn’t, and we have to figure out how to move to the next, far more difficult stage of turning discourse shift into real policy change.

There was some hope about President Obama when he was first elected, especially given his choice of the independent-minded former senator George Mitchell as special envoy. But Mitchell was kept on a way-too-short leash, and Obama collapsed entirely on this issue. He was never willing to use any of his political capital to actually pressure Israel to stop building settlements, never willing to put the $3.1 billion in military aid to Israel on the table, never willing to abandon protecting Israel at the UN so that its leaders would be held accountable for war crimes. That's what pressure starts with—and we haven't seen it yet.

We’ve got a long way to go. In an unexpected head-to-head debate I had back in 2011 with Obama adviser Ben Rhodes, it was shocking (though perhaps not really surprising) to see how profoundly ignorant Rhodes was of Israeli practices towards Americans—Arab-Americans in particular. But then, how else but through a profound discourse shift could we envision the top White House speechmaker and deputy national security adviser sitting there, squirming, while 300 Arab-Americans, mainly young Palestinian women, took him to task for allowing Israel a free pass with billions in aid money and the guarantee of impunity?

Some of the most important shifts have been within the Jewish community. J-Street helped break the taboo on the Hill; Jewish Voice for Peace plays a far more consistent and important role in mobilizing, especially young Jews. AIPAC still has the money to threaten members of Congress, but they can no longer claim to also bring Jewish votes with them, because the Jewish community is thankfully profoundly divided now on the question of Israel. AIPAC represents only the right wing (and therefore, of course, most of the money), J Street holds the center and Jewish Voice for Peace anchors the left. In the Jewish community it’s just a whole new day out there.

Phyllis Bennis is a fellow of the Institute for Policy Studies and of the Transnational Institute in Amsterdam. She is active in the US and global Palestinian rights and peace movements, and her books include Challenging Empire: How People, Governments, and the UN Defy US Power and Ending the US War in Afghanistan: A Primer.