Hillary Clinton is no radical. She uses Hard Choices to situate herself as a centrist Democrat - a wife, mother, and person of deep Christian faith who fervently believes in American exceptionalism. This mindset, that U.S. economic and military interests should trump the interests of other nations because, quite simply, we're an important imperial power, dovetails with Clinton's most deep-seated beliefs. 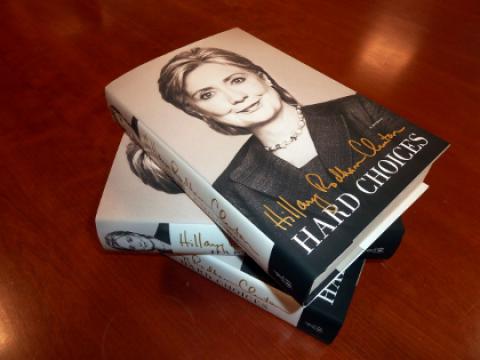 In Hillary Rodham Clinton's latest memoir, Hard Choices, the 67th secretary of state says that an ancient proverb from Sun Tzu's The Art of War guided her through four years as the nation's top ambassador: "When you are in a common boat, cross the river peacefully together."

The wisdom of this statement is obvious. How this philosophy plays out in practice, however, is not.

Clinton's enormous tome offers readers a detailed-but rarely reflective-overview of the 270 countries around the world in which the United States has embassies. Each country, she writes, poses its own challenges, whether in maintaining peace, promoting human rights, fighting terrorism, or because of constantly changing economic and social conditions. She calls diplomacy an exercise in "smart power" and writes that during her tenure "our expanded focus on technology, public-private partnerships, energy, economics, and other areas beyond the State Department's standard portfolio" complemented, but did not replace, the diplomatic tools and priorities of earlier administrations. At its core, she explains, diplomacy utilizes "hard and soft" tactics, the carrot-and-stick of "incentives and threats, urgency and patience, plus deliberate-and effective-misdirection." It's clearly not for the faint of heart.

Women's empowerment is key to Clinton's vision of progress, and she is forthright in supporting women's human rights. Indeed, she is outspoken in stressing the importance of classifying rape, domestic and sexual violence, genital mutilation, and child marriage as affronts to decency. Furthermore, she advocates "women's full and equal participation in the political, civil, economic, social and cultural lives of their countries of origin." Her reasoning rests on a practical-and not explicitly feminist-reality:

The places where women's lives are most undervalued largely line up with the parts of the world most plagued by instability, conflict, extremism, and poverty.

Conversely, countries that educate girls; allow women to engage in public life, vote, participate in governance; and provide access to affordable health care and medicines are far more stable than those that don't.

That said, it is curious that the book fails to address maternal mortality, a topic of immense concern to the World Health Organization (WHO). Indeed, the WHO estimates that 800 women a day die from preventable pregnancy or childbirth-related complications; in 2013 alone, the death toll hit an appalling 289,000 women.

It's a glaring omission-and is not the only subject you'd expect to see covered that isn't. There's no mention of abortion-legal or illegal. Likewise, contraception gets short shrift and the reproductive havoc caused by modern warfare is completely ignored. The latter is a particularly galling exclusion since even the U.S. Army Medical Department Journal has begun to pay attention to this issue and to the fury it arouses in those who have been affected. Indeed, the Journal's April-June 2013 edition reports that during the first Gulf War, smoke from burning oil, diesel, and gas fumes and exposure to nerve and mustard gas led to adverse pregnancy outcomes in scores of Iraqi women-from stillbirths, to preterm deliveries, to an increase in congenital abnormalities. Whether Clinton was moved, or horrified, by this finding is anyone's guess.

She does, however, loudly and proudly champion LGBTQ rights and slams the anti-gay policies of the more than 80 countries worldwide-in the Caribbean, Middle East, and South Asia-that consider it a crime to be queer. Cameroon, Kenya, Nigeria, Russia, and Uganda are specifically called out for their homophobia.

Closer to home, Clinton touts new State Department policies that provide full benefits to the partners of LGBTQ staffers. She also trumpets shifts that have made it easier to change the gender listed on a passport or to change a surname following a marriage or civil union.

Good moves? Of course, but these deeds formed a miniscule part of Clinton's work as secretary of state. Instead, the bulk of her time was spent trekking between world hotspots; Hard Choices chronicles her near-constant travels to nations on every continent.

And therein lays the problem for readers who consider themselves progressive or left-of-center.

Clinton is clearly a brilliant negotiator and knows how to cajole and back-slap as well as arm-twist and hammer. But she is no radical. In fact, she uses Hard Choices to situate herself as a centrist Democrat-a wife, mother, and person of deep Christian faith who fervently believes in American exceptionalism. This mindset, that U.S. economic and military interests should trump the interests of other nations because, quite simply, we're an important imperial power, dovetails with Clinton's most deep-seated beliefs, and she misses no chance to argue that the United States should get what it needs, whenever it needs it.

So much for the common boat.

What's more, while she sheepishly admits to getting swept up in the call to war against Saddam Hussein-which she now regrets-she takes great pains to clarify that she is no pacifist. Or socialist.

Take her support of the Trans Pacific Partnership, a secret pro-corporate trade agreement that Public Citizen, a 43-year-old Washington, D.C.-based government watchdog group, warns could, "in one fell swoop . offshore millions of American jobs, roll back Wall Street reforms" as well as "jack up the cost of medicines, expose the U.S. to unsafe food and products, and empower corporations to attack our environmental and health safeguards." Clinton has never answered this critique. Instead, she offers vague platitudes, writing that an alliance of "open market democracies" promises "a more prosperous future."

Then there's the issue of energy. Clinton maintains that "cheap and plentiful natural gas is helping drive down costs for energy intensive manufacturers and giving the United States a big competitive advantage over places like Japan and Europe, where energy prices are much higher." The word fracking is never used, and while she does nod toward "concerns about the new extraction practices," she does not discuss them.

Needless to say, this is a big problem since scientists the world over have issued warnings about the potential dangers of hydraulic fracturing (fracking) on human health and the environment. One prominent study, conducted by SusanNagel of the University of Missouri School of Medicine, found that many of the more than 700 chemicals used in fracking "can disrupt not only the human body's reproductive hormones but also the glucocorticoid and thyroid hormone receptors, which are necessary to maintain good health."

Unfortunately, war, fracking, and trade policies are unlikely to capture the imagination of Clinton's right-wing opponents, who are expected to continue to pound away at her as if she is a flaming liberal or radical feminist. That she is neither goes without saying.

Hard Choices is a fascinating glimpse into 21st-century politics that affirms Clinton as a conventional player whose administration-should she choose to run for president, and should she win-will be little different from the administrations of her male predecessors. Yes, she will face overt sexism, but when the chips are down, President Hillary Rodham Clinton will still beat the drums of war and will privilege private businesses over public interests. Perhaps some of the countries that find themselves in the common boat will benefit. As for those left floundering in rough seas, the jury remains out. Nonetheless, should these nations build boats of their own, we would be wise to expect a tidal wave or tsunami.

[Eleanor J. Bader is a teacher, freelance writer and activist from Brooklyn, NY. She is also the co-author of Targets of Hatred: Anti-Abortion Terrorism, St. Martin's Press, 2001.]

Thanks to the author for sending her review to Portside.