In some circles, particularly among "progressive" Zionists, the terrible injustice done to the Palestinians is acknowledged, but as awful as the Nakba was, they say, it was what had to be done to create and ensure the security of the Jewish state. To be clear, the price was paid by the Palestinians-that is, the killing and expulsion of Palestinians for the sake of Jewish safety. The only way you can think that - is to believe that Jewish lives matter more . . . 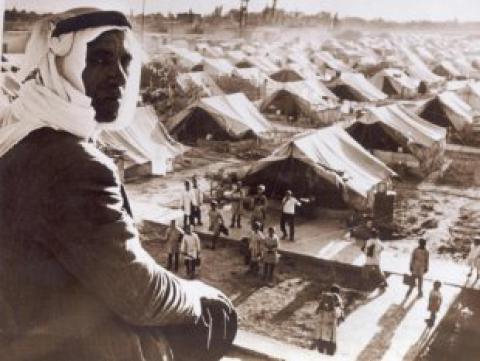 As Israeli government violence against the Palestinians in Gaza intensifies (the latest news being an aggressive ground invasion), I saw a discussion on-line about whether Israel has become more brutal or the brutality has simply become more visible to the public.

I remembered listening to Benjamin Netanyahu when he was at MIT in the 1970's. He called himself Bibi Nitai and said he was in self-exile until the Labor Party, which he despised, was out of power. He spoke contemptuously about Arabs, and predicted he would be the leader of Israel someday and would protect the Jewish state in the way it deserved. The immediate response many of us had was: "Heaven help us all if he ever gets into power in Israel."

I also remember the many Israeli leaders I met in the 1970's from Labor and Mapam and from smaller parties on the "Zionist left" who seemed kind and caring and markedly different from Benjamin Netanyahu-and in many ways they were, not just in their political rhetoric (they all said they were socialists) but as human beings, or so it seemed. But when I finally dug a little deeper and read my history, I learned how they, too, were participants-in fact, often leaders-in the plan to drive the Palestinians out of their homes and off their land. Nothing very kind or caring about that, to say the least.

The bottom line: Israel was created based on the expulsion of over 700,000 Palestinians from their land and from their homes (what Palestinians call the Nakba, the catastrophe). This is the heart of the problem.

In some circles, particularly among "progressive" Zionists, the terrible injustice done to the Palestinians is acknowledged, but as awful as the Nakba was, they say, it was what had to be done to create and ensure the security of the Jewish state. (The most recent proponent of this position is Israeli writer Avi Shavit.) It was a terrible price that had to be paid, he and others concede. To be clear, the price was paid by the Palestinians-that is, the killing and expulsion of Palestinians for the sake of Jewish safety. And quite simply, the only way you can think that - that you can excuse the Nakba- is to believe that Jewish lives matter more than Palestinian lives.

And isn't that what we are seeing today? If Jewish lives matter more than Palestinian lives-if, as the argument goes, the Nakba had to happen so that Jews could be "safe"-doesn't the brutal violence we see so casually inflicted on the people of Gaza by the Israeli government follow from, in fact, isn't it embedded in, that history? (And it's ironic to note that large numbers of the Palestinians in Gaza are from families that fled there during the Nakba in 1948 as refugees from cities and villages in what became Israel.)

That is why I believe those of us working in our own communities-in my case, the Jewish community-need to make sure everyone not only knows about the Nakba but understands that this is the heart of the issue. And that central to the achievement of the "Zionist dream" has been that Jewish lives matter more than Arab lives. That so much attention was paid in Israel to the three kidnapped Israeli boys, in contrast to the total contempt and disregard for the large numbers of Palestinian youth killed and languishing in Israeli prisons for the crime of being Palestinian, brings this point home.

Finally, our understanding of the Nakba cannot end there. We cannot use the acknowledgement of injustice to excuse ourselves from doing anything to end it. We have to take the next step-to think about solutions; to work to hold Israel accountable to basic principles of human rights and self-determination; to recognize the rights of those who have been expelled from their homes. Sometimes the problem is understood as beginning with "the occupation" of 1967, but the root cause goes back to the Nakba and the refusal to allow the return of the refugees in contradiction of UN general assembly resolution 194. In the Palestinian-led call for Boycott, Divestment, and Sanctions (BDS), which has reverberated across the globe, the principles are laid out clearly: 1. Ending the Israeli occupation and colonization of all Arab lands and dismantling the Wall;? 2. Recognizing the fundamental rights of the Arab-Palestinian citizens of Israel to full equality; and? 3. Respecting, protecting and
promoting the rights of Palestinian refugees to return to their homes and properties as stipulated in UN resolution 194. That is what is needed to address the problem at its core.

[Donna Nevel, a community psychologist and educator, is a long-time organizer for peace and justice in Palestine/Israel. Most recently, she was a founding member of Jews Say No!, is on the board of Jewish Voice for Peace, and is a member of the coordinating committee of the Nakba Education Project--US.]