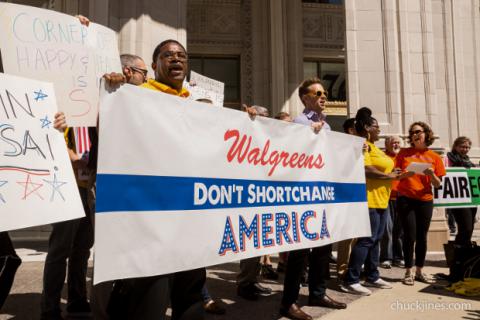 UFCW members join the demonstration in protest of Walgreens’ possible move in corporate address from Illinois to Switzerland., chuckjines.com

Yesterday afternoon the Wall Street Journal’s MarketWatch reported the news: “Walgreen Stock Tumbles on Report It Won’t Invert.” Citing unnamed sources (and Sky News), the bulletin reported that Walgreens has decided not to “invert” the company’s nationality to become a Swiss company, and thus lower its U.S. tax bill as it completes its takeover of the pharmacy chain Alliance Boots.

This news represents a victory for a powerful alliance of citizen action groups, united under the banner of Americans for Tax Fairness, who have been sending a strong message to Walgreens that, if the company did not renounce plans to abandon the U.S., Americans would abandon Walgreens stores. And it represents a victory for President Obama, who had recently called on companies like Walgreens to reject using the inversion loophole to change nationality while continuing to operate in the U.S. He declared in July that “I don’t care if it’s legal, it’s wrong.” And it is a victory for members of Congress, like senators Sander Levin, Richard Durbin and Elizabeth Warren (See her video here.), who are still pursuing legislation that would make it illegal for large corporations to use the inversion option.

Over the last few weeks, the Campaign for America’s Future has joined other coalition groups of Americans for Tax Fairness to criticize the stampede of U.S. corporations using inversion to escape taxes – and we have focused pressure on Walgreens as that company publicly considered taking the inversion route, which would have saved them $4 billion over five years by becoming – on paper – a Swiss company, according to a report by ATF and Change to Win.

Many groups used different language to encourage supporters to sign the same message.  We led our online campaign with a blunt warning: Tell Walgreens: If you leave the U.S., we will leave your stores.

Walgreens used to be a U.S. company that grew by competing on price and service.

Not anymore. They’ve found an easier way: Change their mailing address to Switzerland and skip out on billions of dollars in taxes.

Walgreens is making us the suckers. While they will still deliver their freight on our roads, recruit workers we educated and use the courts we built, they won’t pay their share of taxes anymore.

Tell Walgreens and their greedy, shortsighted CEO Greg Wasson: If you want my business, pay your share. Sign the petition here.

Best, Roger Hickey P.S.: Walgreens is not the only big company considering this type of scheme. That’s why it’s so important to act now and show that we won’t tolerate this kind of unpatriotic corporate behavior. Take action: Click here and sign our petition.

The petition used by all groups was the same: Tell Walgreens: Don’t Desert America.

This has been one of those times when irresponsible corporate acts have spurred us to rapid and coordinated action. As I write this, 300,000 Americans have signed the tough message to to Walgreens CEO Greg Wasson. That statement, still gaining signatures all over the Internet, has been circulated in a team effort by these activist groups:

While savoring the power of our victory, all of these groups understand that we can’t depend on pressuring corporations to make the “patriotic” decision to keep paying U.S. taxes to sustain the roads, police, schools, military, courts and the rest of the things that corporate manufacturing, distribution and sales depend on. In fact, as conservatives have been telling us since the wave of inversions began, we can’t expect corporations to be “moral” or “patriotic.” If we write the rules that let them get away with immoral and unpatriotic betrayal of U.S. taxpayers, they will do it. So the next order of business is to get Congress to pass legislation.

Some members of Congress blandly assure us that, “sometime after the 2014 elections,” they will pass “comprehensive corporate tax reform” that will fix this epidemic of companies changing their national identities and escaping U.S. taxes. But many of these lawmakers, already lining their reelection coffers with corporate money, don’t tell us that they plan to reduce corporate tax rates so low as to bribe big companies into staying in the U.S.

We’ve got to tell members of Congress that we can’t afford to wait. We want them to fight for immediate legislation that would eliminate legal provisions that allow and encourage companies to become “foreign” companies, while continuing to benefit from our market, infrastructure and tax incentives. And if legislation doesn’t pass before November, we need to target lawmakers who are standing in the way.

Three senators trying to pass S. 2360, the Stop Corporate Inversions Act, are now warning that, despite our victory with Walgreens, the continuing “flood of corporate inversions justifies immediate executive action” by the president. Senators Richard Durbin (D-Ill.), Jack Reed (D-R.I.), and Elizabeth Warren (D-Mass.) have sent a letter to President Obama urging him to use his executive authority to reduce or eliminate tax breaks for companies that shift their headquarters overseas to avoid paying U.S. taxes. In their letter they declared:

Corporations that renounce their U.S. corporate citizenship should not be able to reap all the benefits that American tax dollars provide. We urge you to use your authority to stand up for American companies which are proud to be part of our nation and reduce U.S. incentives for others corporations which would abandon their responsibilities to their country for a nod of approval from Wall Street.

The groups that led the fight with Walgreens should feel good about the power we were able to mobilize. We should be encouraged by a new poll released yesterday that shows the American people are overwhelmingly with us in disapproving of corporate inversions. This shows we can make corporate tax evasion a major issue in winning a Congress that will achieve real reform.

But if we decide to lead, we had better figure out a way to produce results. Partial reform won’t change the system or the players. It is absolutely clear that U.S. corporations will exploit any loophole and use any scheme to hide corporate profits and avoid U.S. taxes – to the extreme of abandoning our country.

So while we fight the immediate fight, let’s consider ways to reform U.S. corporate taxes in a way that 1) raises the revenue America needs, 2) treats U.S. corporations just like foreign multinationals – so they are not incentivized to leave the country. And 3) let’s build support for a system that is simple enough that all corporations doing business in the U.S. must pay their fair share, no matter where their headquarters is located. A new corporate tax plan from economist Michael Udell would not only stop inversions, but it would also accomplish all three of the big goals above. I urge you to read Dave Johnson’s explanation and the LA Times’ editorial embracing the Udell plan. And then let’s all start talking about a tax system that will work for America – one that takes into account that all corporations pursue their own interests – and therefore we have to pursue our interests as a nation.