The racial disparities that define Ferguson are indeed shocking. More than two-thirds of the town’s residents are black, but almost all of the officials and police officers are white: the mayor and the police chief, five of six city council members, all but one of the members of the school board, fifty of fifty-three police officers. 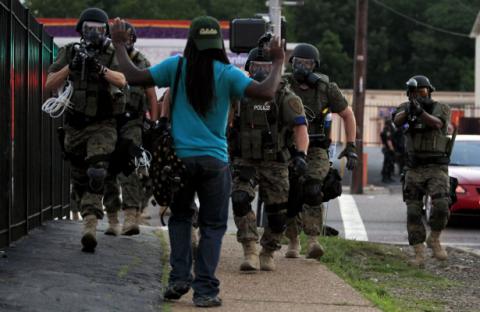 “This whole area, this city is a racial powder keg,” one man at a protest in Ferguson, Missouri told the Los Angeles Times, two days after a police officer shot and killed an unarmed black teenager named Michael Brown. In an attempt to explain why the St. Louis suburb has been filled with demonstrators, showered in tear gas and rubber bullets, and patrolled by armored vehicles in the days since, reporters have unearthed a “history of racial segregation, economic inequality and overbearing law enforcement” that, editors of The New York Times wrote, “produced so much of the tension now evident on the streets.”

The racial disparities that define Ferguson are indeed shocking. More than two-thirds of the town’s residents are black, but almost all of the officials and police officers are white: the mayor and the police chief, five of six city council members, all but one of the members of the school board, fifty of fifty-three police officers.

Most of the time, those officers search and arrest people who don’t look like them. In 2013, 92 percent of searches and 86 percent of traffic stops in Ferguson involved black people. The skewed numbers don’t correspond at all to the levels of crime. While one in three whites was found carrying illegal weapons or drugs, only one in five blacks had contraband.

But is Ferguson really exceptional? The town is just north of one of the most segregated metropolitan areas in the country, St. Louis. Most cities in America, however, are still highly segregated when it comes to their black and white populations. The high percentage of black Ferguson residents below the poverty line—28 percent—is in fact consistent with the percentage of black Americans who live in poverty throughout the country. The point is not that Ferguson’s particular history and statistics don’t matter; rather, it is that whatever shock, outrage and action they inspire should be amplified exponentially. It’s easier to accept ugliness, though, by pretending a mirror is a window to somewhere else.

The unequal application of the force of the law is also well documented across the country. Five times as many whites use illegal drugs as black Americans, and yet black people are sent to prison on drug charges at ten times the rate of whites. And disparity is evident in other police forces; for example, only 10 percent of the New York Police Department’s recruits in 2013 were black.

The whiteness of Ferguson’s political leadership is a national trait, too. Since Reconstruction, only four states have elected black senators: Illinois, Massachusetts, South Carolina and New Jersey. Voters in twenty-five states still have never elected a black representative to the House.

We know also that the killing of a young, unarmed black person isn’t unique to Ferguson. It wasn’t unique to Sanford or Jacksonville; nor to Staten Island; Beavercreek, Ohio; Dearborn Heights, Michigan; Pasadena, California; or any of the other cities that, as Jelani Cobb writes, now bleed together in “the race-tinged death story” that “has become a genre itself.”

There’s a crisis all right. But Ferguson is not its heart so much as a capillary finally burst. That many find the sadness and rage in Ferguson more needing of explanation than the militarized response is particularly telling.