The tentative agreement reached between the ILWU and the Pacific Northwest Grain Handlers Association (PNGHA) would impose a major reduction in working conditions and shop floor power, including the loss of the union controlled hiring hall, and no overtime pay until after 12 hours. The agreement would prevent work stoppages because it would allow the employer the right to use its own managers to replace union workers during work stoppages. 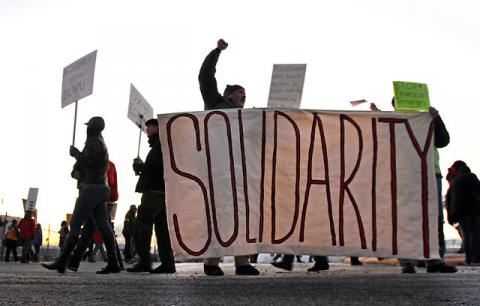 The tentative agreement reached between the ILWU and the Pacific Northwest Grain Handlers Association (PNGHA) contains no surprises. It would impose a major reduction in working conditions and shop floor power, the latest in a cascade of defeats that started with the signing of the union’s historic contract with Export Grain Terminal (EGT) at Longview, Washington in February 2012.
Nor does it bode well for the 20,000 members of the union’s Longshore division, whose contract with the Pacific Maritime Association expired on June 30 and whose fate is being decided in ongoing bargaining.
The negotiated agreement closely mirrors the disastrous contract that EGT imposed on the ILWU. The giant corporations of the PNGHA had, from the outset, demanded from the ILWU the same deal as it gave EGT, in order to keep labor costs low and remain competitive with its technologically advanced rival. They are now about to achieve it.
The ILWU’s accord with the PNGHA would give back to the employers virtually all of the impressive gains in work rules and shop floor powers that the union had wrung from them during many decades of struggle in northwest grain, as well as in longshore.
The union would lose control over the hiring hall, the foundation of its power. The companies would get to hire from a list of workers that they had pre-approved.
Gone would be the eight-hour, even the ten-hour day. The employers would now be free to impose twelve-hour shifts with no overtime. They would take over the control room, from which managers would oversee and regulate the entire process of production. They also would assume the strategic job of the supercargo, charged with overseeing the loading of the ship, which had hitherto always been held by the union. Management would, in addition, get the authority to set the skill requirements for the job of millwright, whose task it is to build and repair machines, and by this means gain the potential to exclude union workers.
The employers would gain the right to prevent work stoppages. The ILWU would maintain its traditional rights to honor legitimate picket lines, to attend stop work meetings, and refuse to labor under unsafe conditions. But this would be rendered meaningless by the employers’ right to use its own managers in place of ILWU members whenever ILWU members exercised those rights.
The ILWU leadership has thus accepted, after a year and half in which its members were locked out and replaced by scabs, roughly the same deal that the PNGHA originally proposed as early as September 2012, then imposed at United Grain, Columbia Grain, and Louis Dreyfuss the following December.
The ILWU had secured, on a temporary basis, a highly concessionary but somewhat more worker-friendly agreement with TEMCO, the joint venture headed up by the Cargill Corporation (which had defected for the time being from the PNGHA). But, as per its contract with the ILWU, TEMCO will now revert to the more employer-friendly accord secured by the other PNGHA members. Kalama Export, the last of the major grain export corporations of the region, had long ago secured the profoundly substandard contract that had served as the template for EGT. This means that pretty much the same degraded terms will now apply more or less uniformly across the Pacific Northwest grain handling industry.
That the union leadership has meekly accepted almost the same offer it rejected at the start of negotiations two years ago was in fact quite predictable.  After all, the ILWU had refused to mobilize its power to stand up to the grain-exporting giants.
The International relied essentially on a strategy of going to the NLRB and the courts, while uttering pathetic nationalistic slurs against the foreign-owned corporations. At no time did it try to stop scabs from working, and it ran roughshod over every initiative by the rank-and-file to organize direct action to that end.
How could there have been any other outcome, especially against wealthy multinational corporations bent on obtaining the lowest possible costs to make the highest possible profits in the spectacularly expanding grain export trade with China and other East Asian countries?
In all likelihood the International’s terrible contract will be ratified, as the ILWU leadership has worn down and demoralized the membership for the better part of a year and a half, forcing them to stand by helplessly as scabs did their work. The International did not even consider building the sort of broad cross-union and extra-union solidarity for mass direct action that had enabled the small, isolated Longview local to put real fear into the heart of the EGT Leviathan — before the ILWU leadership itself brutally undercut it.
Instead, the International has proved its worth to the PMA, pulling the rug out from under a contingent of impoverished port truckers at the very moment ILWU members had begun to honor their picket line and close down several terminals at the Port of Los Angeles. The International justifies this betrayal of its own supposed principles by claiming the Teamsters Union needed to be taught a lesson for encroaching on its jurisdiction at a warehouse in northern California.  But with such a weak and self-centered leadership, it would be surprising if the membership saw any alternative to acceding to the concession-ridden contract.
As with EGT in the recent past and no doubt PMA in the near future, the ILWU leadership is demonstrating yet again how a union hierarchy, structurally insulated from the outcome of class struggle — they don’t work on the shop floor but are materially supported by rank-and-file dues — can blithely oversee disastrous defeat for its membership while escaping scot-free.
Subscribe to Portside