Slavery and the Making of American Capitalism

Edward E. Baptist’s brilliant book, The Half Has Never Been Told, soars because of the author’s decision to root his analysis in the human dimension. 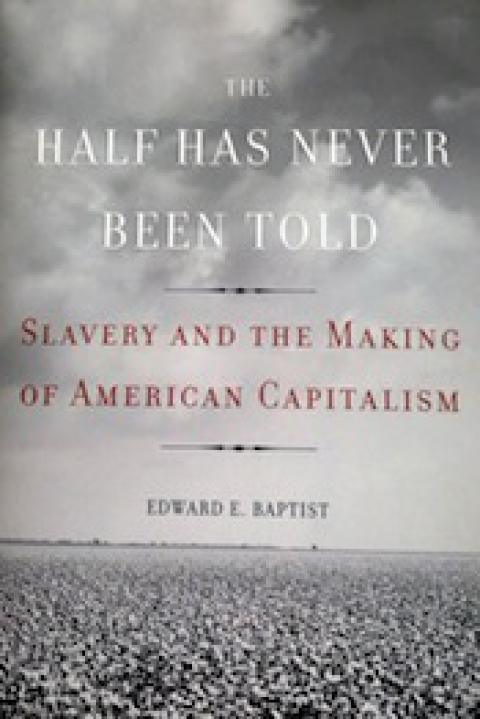 During the 1930s, the WPA sent out workers to interview men and women who had been slaves before the Emancipation Proclamation. It was 72 years after slavery had been abolished and the interviewees were old but their memories were still vivid. When probed by an interviewee, Lorenzo Ivy responded, “Truly, son, the half has never been told.” After the Civil War, black life during slavery was sanitized, deodorized and, above all, reported by Caucasians—not by the people who had toiled under the murderous system. To a certain extent, that one-sided view has persisted. Historians of the South—largely while men—continued the subterfuge. And even recent attempts to set the record straight have followed in the steps of their predecessors: a chapter on families, one on women, etc., looking at groups instead of individuals.

Hence, the need for Edward E. Baptist’s monumental examination of slavery, presented in an entirely new way, extensively through the voices of the slaves themselves.  Baptist has not simply read the WPA interviews but, apparently, every other account of what happened, particularly the many slave narratives published before and after the end of slavery. And, then—what is most original here—he has organized his own account by using parts of the body; for slavery was, above all, an affront to the basic dignity of the corporal body. These are the chapter titles: “Feet,” “Heads,” “Right Hand,” “Left Hand,” “Tongues,” “Breath,” “Seed,” “Blood,” “Backs,” and “Arms”—largely parts of the body. The Introduction (“The Heart”) and the Afterword (“The Corpse”) complete the picture.

“Not long after they heard the first clink of iron, the boys and girls in the cornfield would have been able to smell the grownups’ bodies, perhaps even before they saw the double line coming around the bend. Hurrying in locked step, the thirty-old men came down the dirt road like a giant machine. Each hauled twenty pounds of iron, chains that draped from neck to neck and wrist-to-wrist, binding them all together. Ragged strips flapped stiffly from their clothes like dead-air pennants. On the men’s heads, hair stood out in growing dreads or lay in dust-caked mats. As they moved, some looked down like catatonics. Others stared at something a thousand yards ahead. And now, behind the clanking men, followed a marching crowd of women loosely roped, the same vacancy in their expressions, endurance standing out in the rigid strings of muscle that had replaced their calves in the weeks since they left Maryland. Behind them all swayed a white man on a gray walking horse.”

The men (often with a thousand pounds of iron connecting them) were part of a coffle, enslaved migrants walking seven or eight hundred miles, chattel property, being moved from the north to the south because the profits when they were sold to their new owners were one hundred percent. The slave trade in Africa no longer mattered because slaves in the more northern states (Virginia, especially, but also Maryland) were reproducing so quickly that they created an entire new source of labor. Baptist gives the year as 1805, and states that eventually a million slaves were herded this way to the South. Tobacco farming in the North was less profitable than cotton farming in the South. “The coffle chained the early American republic together.” Slaves walked and walked for five or six weeks, performing their ablutions as they moved. There wasn’t an iota of dignity for the men. Baptist refers to the entire procedure as a “pattern of political compromise” between the North and the South and notes that eight of the first twelve Presidents of the United States were slave owners.

The movement of such huge numbers of slaves to the part of the country that could more productively use them was a “forced migration” grounded on “forced separations, violence, and new kinds of labor.” Equally disturbing—and this is the thesis of Baptist’s magnificent book—“all northern whites had benefited from the deepened exploitation of enslaved people.” Thus, there are no chapters on the African slave trade or the Middle Passage here, but a focus instead on what might be called the second stage of slavery in America. The movement to the deep South would continue for years because of increased productivity of the slaves themselves. In the North, one hand usually sufficed for their work (the dominant hand) but cotton picking required the complicated dexterity of both hands working together.

Moreover, as the country expanded, Southerners made certain that many of the new states further west became slave states where cotton production could continue. So Louisiana, Alabama, Mississippi and Georgia were soon augmented by Texas, Arkansas, and eventually Oklahoma, New Mexico and Arizona, Union territories permitting slavery. It was a nasty balance but it permitted the growth of cotton plantations across the country as well as the steadily increasing cotton industry throughout the entire world (“massive profits from textile manufacturing”—not just in the United States.) Cotton became the “global economy’s most important raw material.”

The plantation owners developed something known as the “pushing system,” forcing the cotton pickers to increase productivity. There were quotas and severe punishments for those who failed, and if a slave had a day when he (or she) picked more than any other day, that became his (or her) new daily quota. Torture for failed quotas was endemic.  All white people in the country benefitted, even though some northerners insisted they were no part of it.

Baptist is not afraid to refer to the entire system as “stealing.”  “If you want to rule a person, steal the person. Steal him from his people and steal him from his own right hand, from everything he has grown up knowing. Take her to a place where you can steal everything else from her: her future, her creativity, her womb.” In such a system there can be no good slave owners, only bad ones. “Stealing can never be an orderly system undergirded by property rights, cushioned by family-like relationships. There is no balance between contradictory elements. There is only chaos and violence.”

Fortunately, by the 1820s, there were increasing pronouncements from white Americans that slavery had to end. And there were increasing narratives published by slaves who had escaped that showed their limited number of readers just how appalling the entire system was.  As I said earlier, Baptist relies on these accounts extensively, plus the isolated reports of a number of attempted revolts such as Nat Turner’s. Christianity was also added to the fray, both as a justification of slavery, by some, and hope for many slaves who had been converted.

In spite of the enormous profits from cotton, it was not an uninterrupted trajectory of economic stability. Banks often lent out more money than they should have, using slaves as collateral. There was often economic turmoil. By the late 1830s, “In response to these clear incentives, enslavers created still more ways to leverage slaves into still more leverage. They mortgaged the same collateral from multiple lenders. They used slaves bought with long-term mortgages to bluff lenders into granting unsecured commercial loans. Above all, they kept buying more slaves on credit. Even if they ran into problems, they figured they would still win, because they could sell their assets. For the slave prices were still rising.”

Inevitably there were panics, collapses, including one that began in Texas, in 1837. Then things bounced back again. Half of the country’s economic activity was related to slavery. By 1850, there were three million slaves in the country. There were years of bitter arguments in Congress about the viability of the entire system. The Compromise of 1850 (another further balancing of slave areas with non-slave areas) simply continued the precarious holding pattern. There were major compromises over runaway slaves, the famous Lincoln/Douglas Debates, John Brown’s execution—dark days for the country. Then in 1860, Lincoln won the election and southern states began to secede. Baptist remarks, “The South did not believe that the North would fight.”

Most of the rest of the story is familiar, as grim as what happened before the end of the Civil War. Black soldiers had pushed the balance. “Their service in battle had saved the nation,” though not necessarily to the benefit they had anticipated. It wasn’t long before the South began imposing major restrictions on black people, the insidious “Jim Crow” laws. Other than a brief period immediately after the war, almost all black people were “shut out of the political system.” Baptist observes, “Slavery and its expansion had built enduring patterns of poverty and exploitation. This legacy was certainly crystal clear in [the] early twentieth-century South. African-American households had virtually no wealth, for instance, while a substantial portion of the wealth held by white households, even after emancipation, could be traced to revenue generated by enslaved labor and financing leveraged out of their bodies before 1861.”

When you consider the long-term effects of slavery, reaching into our world today, it is possible to say that the lives of African-Americans are substantially better than they have ever been before, but when you examine the actual economics impacting black people’s lives, you see a much different picture. Numerous articles in the press during the past few years provide a bleak picture of black people’s living situations. The gap among races widened during the recent economic recession. According to an article in The New York Times in August of this year, “The net worth of the average black household in the United States is $6,314, compared with $110,500 for the average white household, according to 2011 census data. The gap has worsened in the last decade, and the United States now has a greater wealth gap by race than South Africa did during apartheid.” That’s as damning an indictment of the long-term results of slavery in America as possible and something to consider when reflecting on the half-assed analyses of the recent riots in Ferguson, Missouri.

Edward E. Baptist’s brilliant book, The Half Has Never Been Told, soars because of the author’s decision to root his analysis in the human dimension. The book transcends anything that has previously been written about slavery. Dozens of individual slaves are named in the study and their lives successfully worked into the lengthy narration of the legacy of slavery in our country. In short, Baptist has humanized the lives of American slaves, liberated them from one of the most inhumane systems mankind ever devised.  The entire country needs to do the same.

Edward E. Baptist: The Half  Has Never Been Told: Slavery and the Making of American Capitalism