Government Cuts in Funding Delayed WHO Response to Ebola Crisis

According to leading Ebola experts, major cuts in funding from the U.S., Britain, and European governments to the World Health Organization (WHO) contributed to critical delays in responding to the Ebola outbreak in west Africa, which allowed the epidemic to spin out of control. Citing the international recession, Western governments dramatically reduced their contributions to the WHO, and also failed to implement much-needed structural reforms. 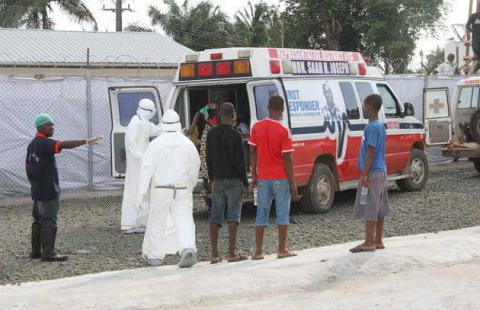 Within 24 hours of opening, this 120-bed Liberian clinic was filled beyond capacity. Ugandan doctors and nurses deployed by WHO are working around the clock, together with Liberians who have been specially trained in infection control and clinical care .,WHO/R. Sorensen

The UK, US and other European governments reduced contributions to the organisation because of global austerity, and also failed to implement much-needed structural reforms, they said. The WHO needs urgent reform, if future global health crises are to be avoided.

The first cases of Ebola occurred in December last year in Guinea, but it was not until late March that the ministry of health notified the WHO of what the Africa regional office described as “a rapidly evolving outbreak of Ebola virus disease in forested areas of south eastern Guinea”. By that time, there had been just 49 cases and 29 deaths.

It took three months to confirm the outbreak because Guinea, having never had a case before, was totally unprepared. “First of all, nobody expected Ebola to pop up in west Africa – you only find what you are looking for,” said Prof Peter Piot, head of the London School of Hygiene and Tropical Medicine. “Then, health information systems in Guinea are extremely poor, as they are in Liberia and Sierra Leone.”

But the opportunity to clamp down hard on the disease in west Africa, contain it and bring it to a swift end was missed. By 23 March, when the official announcement was made, there were already suspected cases in the border areas of Sierra Leone and Liberia, so three governments were involved and two of them were still emerging from the devastation of civil war with damaged healthcare systems.

The WHO has a representative in every country, but the jobs often go to people with political connections. The directors of the Africa regional office, which needed to take the lead, are directly elected by the ministers of health in the region and dependent on them.

“What should be [the] WHO’s strongest regional office because of the enormity of the health challenges, is actually the weakest technically, and full of political appointees,” said Piot. “They are busy electing a new regional director, and the only hope is that the new director will introduce some radical changes. However, I am not optimistic, given the history.”

Médecins Sans Frontières, whose volunteer doctors were quickly treating patients in Guinea, warned the WHO as early as 3 April that this outbreak was unprecedented and needed a strong response. “First of all it was the first time we had a case in a big city like Conakry (capital of Guinea). It is something very different from the remote Congo jungle,” said MSF’s Brice de le Vingne, director of operations in Brussels. The cases were also in a triangle where three countries met. “We knew we were going to have a problem with dealing with three different administrations.” No country was going to want to declare an Ebola epidemic, because of the economic implications.

Yet the WHO’s response was to say that the numbers were still small. “Yes, in terms of numbers but not in terms of the different characteristics of this outbreak,” said de le Vingne.

MSF continued to sound the alarm, but the WHO decided to leave it to the African region. On 2 July, the WHO Africa convened a meeting on Ebola of 11 ministers of health in Ghana. They agreed to map out strategies, try to increase awareness, strengthen surveillance and send in more qualified staff – but the numbers infected and dying continued to soar.

On 8 August, the WHO director, Margaret Chan, finally declared Ebola an international public health emergency. There had been 1,711 cases and 932 deaths. “Countries affected to date simply do not have the capacity to manage an outbreak of this size and complexity on their own,” she said. She urged the international community to provide support.

Everybody now agrees this should have happened much earlier. “They clearly underestimated the situation, partly because the African office dropped the ball, partly because member states, including the UK, cut [the] WHO’s budget for emergencies and haemorrhagic fevers (as proposed by WHO management),” said Piot.

Oxfam agrees. “Donors must take their share of the blame for the WHO’s slow reaction to the crisis,” said Mohga Kamal-Yanni, senior health and policy advisor. “The cuts in funding to the WHO are in part responsible for serious cuts in essential functions, as illustrated by a lack of prompt surveillance and response to the Ebola outbreak.”

The WHO was set up in 1948, just after the second world war. “One has to ask if something set up in 1948 is still structured in such a way in 2014 as to be relevant to today’s world,” said Jeremy Farrar, director of the Wellcome Trust.

He is in no doubt that a global body dedicated to health is needed, but reform is well overdue. “It is very important to remember that the WHO is a secretariat effectively and a technical agency responsive to ministries of health and state governments. That is one of its greatest strengths. That is also one of its greatest problems. It is not a body in its own right – it is a secretariat.”

The WHO is pulled in different directions by different countries with different interests and the way its funding is structured makes that worse. There is core funding, agreed by all the donor nations, but it has been slashed during the recent austere times. In 2011, its budget was cut by $1bn (£620m) and 300 jobs were lost because of a shortfall of $300m (£185m) in the previous year. The budget set for the next two years was $3.96bn (£2.45bn). The 2014-15 budget was set at the same figure – but it halved funding for health crises to $228m (£141m). SARS, (severe acute respiratory syndrome) which began in southern China in 2002 but spread worldwide causing 775 deaths, had attracted extra money from donors but was by then a memory.

But two-thirds of the WHO’s money is earmarked for specific purposes, because it is donated by NGOs or by country governments which want WHO staff to carry out a specific piece of work. So that money is also not available for responding to emergencies such as the current Ebola disaster.

“The overall funding that the WHO has at its disposal, which can be used for what it wants, is very, very limited,” said Farrar. “Many countries are not giving what they promised to give to [the] WHO. Many countries give other money in a bilateral way for a specific purpose.”

As economic recession has impacted on wealthy countries, global spending rather than national has usually been cut – and public health has lost out to hospital treatment. The Ebola outbreak will eventually end but there will be another virus – whether flu, SARS or something we have not yet seen. Experts say that public health, and the WHO, need to be built up if we are to face down these regular threats to the entire planet.

[Sarah Boseley, is the Guardian's health editor. She has won a number of awards for her work on HIV/Aids in Africa, including the One World Media Award.]