Federal watchdog report "calls into question" US efforts to stamp out opium production. 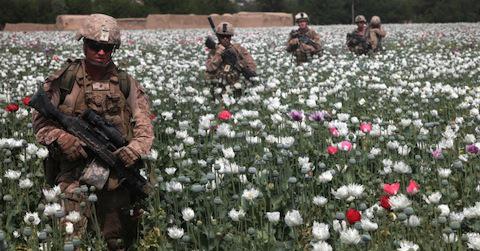 Opium poppy cultivation levels in Afghanistan are at a record high, though the U.S. government has spent over $7 billion to stop it, a federal watchdog states in a new report.

"As of June 30, 2014, the United States has spent approximately $7.6 billion on counternarcotics efforts in Afghanistan," the letter states.

"Despite the significant financial expenditure, opium poppy cultivation has far exceeded previous records," he writes, adding that this "calls into question the long-term effectiveness and sustainability of those prior efforts."

The value of opium and opium-made products in Afghanistan—the world’s largest producer of opium—rose 50 percent from 2012 to 2013, the report states, citing United Nations Office on Drugs and Crime (UNODC) figures.

Though the crop has funded extremist and criminal groups and contributed to a public health crisis, many Afghans see opium poppy cultivation as their only option. A UNODC report issued last year stated that Afghan farmers cited as among the top reasons for their cultivation of opium poppy its high sales price, high income from little land, improving their living conditions, and poverty.

A Defense Department response to the SIGAR findings, which is included in the report, states, in part: "In our opinion, the failure to reduce poppy cultivation and increase eradication is due to the lack of Afghan government support for the effort." The Department also states that the rise in poppy cultivation "is a significant threat to U.S. and international efforts in Afghanistan."

Just as alcohol prohibition allowed organized crime to flourish in the 1920s, drug prohibition empowers a dangerous underground market that breeds violent crime throughout the United States and the world. The illegality of drugs has inflated the price, and thus the profit, of drugs substantially. With it, the competition for drug markets has intensified, often through violence. Whether on street corners in U.S. cities, across the border in Mexico, or in the poppy fields of Afghanistan, drug trade-related violence continues, despite the billions of drug war dollars devoted annually to law enforcement and interdiction efforts.

As for the rising opium production in Afghanistan, author and TomDispatch editor Tom Engelhardt wrote last year that it could be seen as a legacy of the U.S. occupation:

Almost 12 years after it began, no one here, it seems, is considering how to assess American “success” on that distant battlefield.  But were we to do so, what possible gauge might we use?  Here’s a suggestion: how about opium production?  In 1979, the year America’s first Afghan war (against the Soviets) began, that country was producing just 250 tons of opium; by the early years of the post-9/11 American occupation of the country, that figure had hit 3,400 tons.  Between 2006 and the present, it’s ranged from a 2007 high of 8,200 tons to a low of just under 5,000 tons.  Officials of Russia’s Federal Drug Control Service now claim that 40,000 tons of illicit opiates have been stockpiled in Afghanistan, mostly to be marketed abroad.  As of 2012, it was the world’s leading supplier of opium, with 74% of the global market, a figure that was expected to hit 90% as U.S. combat troops leave (and foreign aid flees).  In other words, success in an endless war in that country has meant creating the world’s first true narco-state.  It's a record to consider.  Not for nothing, it seems, were all those billons of dollars expended, not without accomplishments do we leave (if we are actually leaving).