In December 2013, Baldemar Velasquez, the founder and President of the American farm worker union the Farm Labor Organizing Committee (FLOC), briefed the British House of Commons on the state of human rights for tobacco farm workers in the United States. His report raised deep concern amongst MPs. On July 26 and 27, 2014, we met with farm workers in the fields where they work and within the camps where they live. 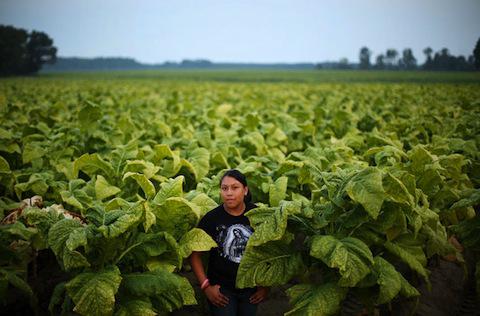 A report released on Wednesday by two members of the British Parliament asks tobacco companies to guarantee freedom of association for farm laborers, some of whom live in conditions described as squalid while toiling on North Carolina farms.

British American Tobacco, the largest shareholder of Reynolds American Inc., should lobby the major purchaser of North Carolina tobacco to commit to full freedom of association for farm workers, Mr. Sheridan said. Many workers fear retaliation if they complain, the report stated.

"We are asking them to use that influence to sort of say to Reynolds that you have to address these human rights issues," Mr. Sheridan said in a telephone interview after an event on Wednesday to announce the findings at London's Palace of Westminster.

Nearly 20 Parliamentarians, members of the media, and representatives from human rights groups attended the release of the report. Mr. Lavery, the co-author, could not be reached for comment.

"While it is not clear the issues identified take place within our supply chain, further investigation is needed," read the company's statement.

An independent review of its United States supply chain will be conducted next year. British American Tobacco contends the Farm Labor Practices Group, made up of representatives from FLOC, tobacco companies, and others, "remains the best mechanism" for resolving issues.

But farm labor union President Baldemar Velasquez said that group has accomplished little since it started meeting in 2012.

"FLOC is trying to steer them into effective, concrete mechanisms on the ground as opposed to the cosmetic approaches that they have tried to solicit with these talks," he said.

The report also criticized the group's progress, saying it "has failed to effectively address worker abuses in the tobacco supply chain."

A FLOC campaign to organize farm workers that started this summer has led to 1,400 signing up, double the number that had been recruited in July when the Parliamentarians visited.

Mr. Velasquez did not attend the London event but lauded the efforts of the British politicians and called the report "hard-hitting."

Thirty-four members of Parliament signed a resolution stating British American Tobacco is responsible for ensuring its supply chain is free from human rights abuses. The official language, called an early day motion, is the second one in recent months to call attention to the tobacco farm worker issue. Mr. Sheridan also pointed to the Modern Slavery Bill, which addresses human trafficking, as a way to correct problems identified in the report. The bill is progressing through the Parliamentary system.

Testimonies he heard from two workers during his trip to North Carolina have stayed with him, he said. One laborer said female workers have been subjected to sexual exploitation from farm supervisors; another complained of the sickening effect of pesticides used on the crops.

Mr. Sheridan met with British American Tobacco executives last week and expressed disappointment in the company's response. Advocates will continue to make their case and appeal to the company's shareholders, he said.

A spokesman for Reynolds did not return requests for comment.