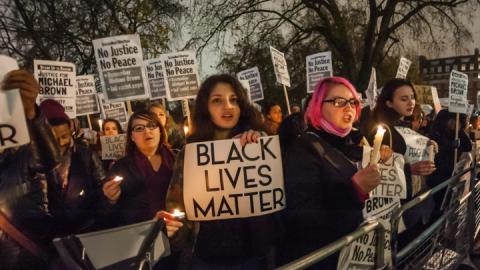 People hold candles, posters and placards at the candlelit vigil for Michael Brown, calling for justice and stressing that 'Black Lives Matter' on November 26, 2014., Peter Marshall/Corbis

Protesters have filled streets across the country in the last two weeks to speak out against two outrageous failures of justice. First, in Ferguson, Missouri, a grand jury declined to indict the police officer who shot unarmed 18-year-old Michael Brown to death this summer and left his body in the street for four hours. Then, adding insult to injury, another grand jury in Staten Island, New York, chose to look the other way and return no indictment of the police officer who choked unarmed father of six Eric Garner to death, on camera, using an illegal chokehold as Garner pleaded, "I can't breathe!"

Brown and Garner were two people living a thousand miles apart, at very different points in their lives. But they share one tragic fact in common: They were both black men executed in broad daylight by cops. And unless the U.S. Justice Department nails their killers on federal civil rights charges, neither of their families will get even the cold comfort of a day in court.

Sadly, there's nothing new about this pattern of lethal racial profiling. For far too long, African-Americans in this country have had to worry about whether police will kill their loved ones on the slightest pretext without facing any meaningful punishment. Racist violence is a deep-rooted part of this country's history, and it's going to take substantial nationwide reform of the policing and court systems to change this awful reality. Here are 11 of the most heartbreaking examples of black men, women and children killed by police in the last 15 years. Their stories are different in many ways, but none of them deserved to die the way they did – and we could fill many more pages with others like them.

1. Amadou Diallo (1999)
Four NYPD officers notoriously rained 41 bullets down onto Diallo in the Bronx, killing the unarmed Guinean immigrant as he tried to enter his apartment building. They later claimed to have seen Diallo reaching for something that looked like a weapon; in fact, all he had in his hand was a wallet. The incident sparked national headlines and civil rights marches, as well as Bruce Springsteen's protest song "American Skin (41 Shots)" – but all four police officers were acquitted of all charges in the case. One of the killer cops, Kenneth Boss, remained on the force and was allowed to carry an NYPD gun again in 2012.

2. Patrick Dorismond (2000)
Dorismond was hanging out in Manhattan with a friend when an undercover cop approached and asked where he could score some weed – blatant profiling based on Dorismond's appearance. A confrontation ensued, and another officer shot him fatally in the chest. Then-Mayor Rudy Giuliani released the 26-year-old security guard's sealed juvenile legal records in an effort to smear his police force's latest victim, infamously saying that the dead man was no "altar boy"; it was later revealed that Dorismond had attended the same Catholic school as the mayor, and served as an altar boy in his youth. A grand jury chose not to indict the officer who shot Dorismond to death.

3. Ousmane Zongo (2003)
The NYPD crossed paths with Zongo at a storage facility in Manhattan during a raid on a counterfeit CD ring. Zongo, an unarmed 43-year-old immigrant from Burkina Faso who repaired art, had nothing to do with the raid, but police shot him four times when they saw him in a corridor. The officer who killed Zongo was convicted of criminally negligent homicide – but a judge sentenced him to no more than five years of probation and 500 hours of community service for taking an innocent man's life.

4. Timothy Stansbury (2004)
NYPD Officer Richard Neri fatally shot Stansbury, an unarmed 19-year-old, during a late-night patrol of a Bedford-Stuyvesant housing project. Neri said it was an accident, and a grand jury believed him, declining to return an indictment. The only punishment he faced was a 30-day suspension from the force. Neri was later elected to a prestigious position in a New York police union.

5. Sean Bell (2006)
The night before his wedding, Bell and some friends went to a strip club in Queens for his bachelor party. When they left the club around 4:15 a.m. the next morning – Bell's wedding day – they ran afoul of a group of undercover and plainclothes NYPD cops, who fired an astonishing 50 bullets into the 23-year-old's car, killing him instantly. The case led to major protests, but all three police officers charged in the case were acquitted.

6. Oscar Grant (2009)
On New Year's Day, 2009, Bay Area transit officer Johannes Mehserle detained Grant on a subway platform after reports of a fight. The unarmed 22-year-old was lying face-down on the ground when Mehserle shot and killed him, as captured on video by many bystanders. Mehserle was charged with murder, but the jury convicted him of a lesser crime, and he ended up serving less than a year for killing Grant.

7. Aiyana Stanley-Jones (2010)
Aiyana Stanley-Jones was just seven years old when a Detroit SWAT team took her life. Late at night, searching for a suspect in her neighborhood, the police threw a flash grenade through her family's window, stormed the house and shot the little girl in her sleep. The raid occurred while the SWAT team was accompanied by a camera crew from the reality show The First 48. There have been two trials so far, both ending in mistrials.

8. Ramarley Graham (2012)
Plainclothes narcotics cops chased 18-year-old Graham into his family's home in the Bronx for unclear reasons. They shot and killed him at the door of his family's bathroom. A tiny quantity of marijuana was later found in the toilet – hardly enough to justify an instant death sentence for a teenager. The cop who killed Graham was not indicted, but a federal investigation is ongoing.

9. Tamon Robinson (2012)
An NYPD patrol car collided with Robinson at a Brooklyn housing project, killing him, after responding to a report that Robinson was digging up paving stones to sell them for some extra cash. He was unarmed. A police report claimed that Robinson caused his own fatal injuries by running into a stationary patrol car, but eyewitnesses said the cops rammed their vehicle into the 27-year-old; a few months later, the department had the gall to try and bill Robinson's grieving family for $710 for damage to the car. Two years later, the case has yet to go before a grand jury.

10. Rekia Boyd (2012)
Off-duty Chicago cop Dante Servin opened fire from his car into a group of people on the street, claiming he perceived a threat to his life. 22-year-old Rekia Boyd was among the people on the scene; she died after taking a bullet to the head. Servin has been indicted (making him the first Chicago police officer in many years to face trial for a fatal shooting), but his case was recently delayed to 2015.

11. Kimani Gray (2013)
Plainclothes NYPD officers confronted the 16-year-old Gray in Brooklyn. Police claimed that he pulled a gun before they shot him to death on the street, but Gray's family disputed this allegation. Prosecutors announced this summer that they are not pursuing charges against the officers who killed the teenager.