In 2006, Congress passed the "Pension Protection Act", which had a devastating effect on single-employer defined benefit pension plans. Now Congress is looking to do the same to multi-employer pension plans. 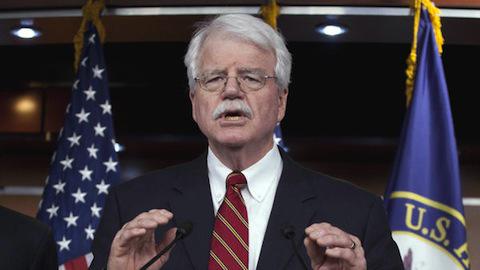 But what's the rush? Rep. George Miller, D-Martinez, who is pressing to conclude a deal on multiemployer pension plan problems before he leaves office this month. , Harry Hamburg

Passing legislation on a tight deadline--especially a bogus deadline--is invariably a formula for serious mischief. That's what's happening with a proposal to deal with a supposed crisis in worker pensions by allowing trustees to slash the pensions of already-retired workers to shreds.

Members of the House Education and the Workforce Committee are trying to slip the measure into an omnibus spending bill to be passed before Dec. 11, when Congress leaves Washington for its vacation recess. Pension advocates are up in arms, not least because the measure's actual language hasn't been made public. (It's still in negotiation, committee staffers say.) What is known is that it would change four decades of labor law in a way that mostly affects the oldest and most vulnerable workers.

"There's no bill, no legislative language," David Certner, legislative counsel to AARP, told me Friday. "To attach this big a change to a year-end spending bill is outrageous."

What's at issue is the condition of so-called multiemployer pension plans. These are defined benefit pensions in industries comprising lots of relatively small employers. The plans often are sponsored by unions, who share trustee duties with employer representatives.

Thanks to changes in the workplace, the 2008 crash, and the long recession, many--but by no means most--of these plans are underfunded and in danger of going bust sometime in the next decade or two. In those cases, the pensions will become the responsiblity of the federal Pension Benefit Guarantee Corp.

That's a concern for two reasons: First, the PBGC, which also takes over single-employer plans that run out of money, is already in serious financial trouble. Second, although the PBGC guarantees single-employer pension benefits up to about $59,318 a year (as a straight-life annuity for someone retiring this year at 65), the ceiling is much lower for multiemployer plans--for a worker with 30 years of pension credits, the maximum PBGC guarantee is $12,870. (The guarantees are adjusted each year for inflation.)  That would be a huge cut for many workers with long years on the job.

To keep many of these plans solvent, the committee is considering a proposal to allow plan trustees to cut retirees' pensions now, many years in advance of any looming insolvency. The benefit cut could be no lower than 110% of the PBGC guarantee, or about $14,150 for that 30-year worker this year.

This would mean gutting the fundamental principle underlying the federal ERISA law governing private sector pensions. "The law says that once a retiree has earned a benefit, it must continue to be paid, until the day the fund is depleted," says Karen Friedman, policy director of the Washington-based Pension Rights Center.

That may sound like financial brinksmanship, but it's really a guarantee that all pension beneficiaries will be treated equally--pension trustees can't slash the benefits of the already-retired in order to preserve those for members still working.

The remedy is being crafted by Committee Chairman John Kline, R-Minn., and its ranking member, California's Rep. George Miller, D-Martinez, who is retiring. My request for comments was funneled up to committee staff, who say that "members are still discussing the details about a possible legislative solution to the multiemployer pension crisis and remain hopeful Congress will act before the end of the year."

Although some big unions favor the change, it's opposed by the boilermakers and international Assn. of Machinists, among others. "Changing ERISA to allow cuts in promised benefits is a ticket to poverty and dependence on government asisstance," IAM International President R. Thomas Buffenbarger wrote members of Congress last month.

The new proposal is an outgrowth of a study conducted last year by the National Coordinating Committee for Multiemployer Plans, which brought together union leaders, employers, and pension experts to find a way out of the crisis. The study considered numerous remedies, including merging struggling plans to improve administrative efficiencies; raising the standard retirement age from 65 to 67, as Social Security has done; and increasing premiums paid by employers to the PBGC to shore up its funding.

But the most draconian idea was to allow "early corrective actions" such as the benefit cuts.

Congressional sources say the proposals on the table would incorporate protections for the oldest and most vulnerable retirees, as well as a requirement that plan members vote to approve the benefit cuts. But Friedman says that's not very comforting: any such vote would pit existing workers, who can still accumulate pension credits on the job, against retirees, who can't return to the workforce. "That creates a real conflict of interests," she says.

What's most irksome about the Congressional maneuvering is the ginned-up atmosphere of urgency around it. For even seriously impaired pension plans, the day of reckoning may be 10 or 20 years off; a lot can happen in that time frame to improve their condition or for other solutions to bubble to the surface.

"Yes, there's a problem," Friedman says, "but it doesn't have to be solved this very second, with three days left in the session."

the measure's fate is uncertain; as word of a pending Kline-Miller deal started leaking out this week, the opposition has grown more vocal. "I'm more confident today than I was four days ago," AARP's Certner told me.

But the cloud hasn't passed. While it's true that some fix is imperative, whatever takes shape should be aired in public and weighed carefully. Pushing it through in haste, as all of Capitol Hill is rushing to get out of Washington and go home for the holidays, only raises the prospect that the most powerless members of the workforce will get screwed.