Congress must decide whether to rescue these funds with low-cost loans, force them to cut benefit payments or let the funds go bankrupt and wipe out retirees’ entire pensions. 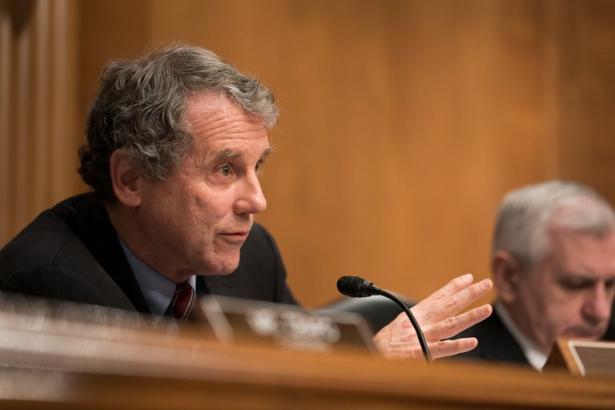 Senator Sherrod Brown, Democrat of Ohio, represents many retirees covered by multiemployer pension plans and fought for the creation of a select congressional committee to craft what could effectively be a federal rescue of as many as 200 of the plans. , Erin Schaff for The New York Times

The sprawling agreement to boost government spending reached by Republicans and Democrats this month quietly included a step toward defusing what could be a financial time bomb for 1.5 million retirees and hundreds of companies in the industrial Midwest and the South.

The deal creates a select congressional committee to craft what could effectively be a federal rescue of as many as 200 so-called “multiemployer” pension plans — in which employers and labor unions band together to provide retirement benefits to employees.

Many of these plans are hurtling toward insolvency in the coming decade, with benefits owed to retirees projected to swamp what the plans can afford to pay. The 16-member, bipartisan committee will have to come up with a solution and legislation by the end of November, which the full Senate would need to vote on by the end of the year.

Select congressional committees have long struggled to produce results, like one during the Barack Obama administration meant to reduce the growth of the national debt. This committee’s work will be complicated by disagreements over whether companies, retirees or taxpayers should bear the brunt of the cost for shoring up pension plans that would otherwise run out of money.

“A solution that works is going to be challenging for all parties, and that’s going to make it hard to get political buy-in,” said Aliya Wong, the executive director of retirement policy at the U.S. Chamber of Commerce, which has pushed Congress to solve the multiemployer pension problem. “The biggest issue is, where do you get the money from? Every source seems to be tapped out.”

Pension plans across the nation are facing shortfalls, with both corporate plans and those for public employees like teachers and firefighters owing more to retirees than the investment funds can possibly pay. But the looming collapse of the multiemployer pension system is significant given the sheer number of people affected and the potential for a devastating economic ripple effect: retirees losing the pension checks that keep them afloat and a potential wave of bankruptcies among the companies that once employed those workers.

The situation has been brewing since the 2008 financial crisis, as investments plummeted, leaving many plans in the red. The slow economic recovery and recent stock market rally have not been sufficient to reinvigorate the plans, which are jointly funded by labor unions and employers whose workers participate in them.

According to Boston College’s Center for Retirement Research, the nation’s 1,400 multiemployer plans are facing a $553 billion “hole” of unfunded liabilities, meaning they don’t have sufficient assets to cover what they owe workers. About a fourth of these plans are in the so-called “red zone,” where insolvency is more imminent, potentially within the next 10 to 20 years. Most of the participants in these plans work in the transportation, services and manufacturing industries. Their employers, many of which have been trying to withdraw from the plans, include companies like United Parcel Service and Kroger.

U.P.S. said in 2016 that it could be responsible for nearly $4 billion in benefits payments if the Central States Pension Fund, the largest multiemployer plan facing insolvency, slashes benefits to retirees or becomes insolvent. In the past year, U.P.S., which participates in more than two dozen pension plans, has been working with lawmakers on Capitol Hill to help develop pension legislation. It has also offered its own proposals.

“We want the system stabilized and fixed in the long term because we’re in so many plans and we have a lot of employees in the plans,” said Chris Langan, vice president of finance at U.P.S. “It’s something that is not wise to wait on.”

Now, Congress must decide whether to rescue these funds with low-cost loans, force them to cut benefit payments or let the funds go bankrupt and wipe out retirees’ entire pensions.

Ms. Wong and other advocates of congressional action say they are optimistic that the committee can achieve rare bipartisan success. Members of Congress across the aisle, they say, are coming to grips with the cost of doing nothing.

“This committee forces Congress to get serious,” said Senator Sherrod Brown, Democrat of Ohio, a longtime champion of unions who represents many retirees covered by the pension plans, and who fought for the committee’s creation in the spending bill. “It forces us to come together and work out differences.”

A United Parcel Service driver. U.P.S. has said that it could be responsible for nearly $4 billion in benefits payments if the Central States Pension Fund slashes benefits to retirees or becomes insolvent. Credit Mark Lennihan/Associated Press The strain on the multiemployer pension system carries another risk — the potential annihilation of the Pension Benefit Guaranty Corporation, the government agency that insures pension plans. The P.B.G.C. said in its latest annual report that its multiemployer program is likely to run out of money by the end of fiscal year 2025 because of the “rapid decline” in the P.B.G.C.’s financial position. In 2017, the agency paid $141 million in financial assistance to 72 multiemployer pension plans and that number is expected to rise as more plans collapse.

If the multiemployer pension plans go broke, the federal safety net created to protect retirees will not have enough money to make good on the promised benefits, leaving workers with little to no retirement benefits.

“It’s an urgent problem that needs to be fixed,” said Alicia H. Munnell, a management professor at Boston College and the director of its Center for Retirement Research. “Unfortunately there’s an ideological divide — do you bail these people out or not?”

Newsletter Sign UpContinue reading the main story Sign up for the all-new DealBook newsletter Our columnist Andrew Ross Sorkin and his Times colleagues help you make sense of major business and policy headlines — and the power-brokers who shape them.

Mike Walden, a retired Teamster and the president of the National United Committee to Protect Pensions, has led fellow retirees to Washington for several years to pressure members of Congress to fix the problem. Retirees, already squeezed by living on a fixed income, are frustrated at the prospect of seeing their benefits reduced or eliminated if Congress does not act, he said. “I don’t think they understand, when they take money away from us, how much they’re going to hurt the economy.”

To succeed, the committee must navigate Washington’s aversion to anything that resembles a bailout, particularly as the government is running large deficits that are projected to grow $7 trillion over the next decade — and when many Republicans see unions as political enemies.

And Congress has already tried to help these plans, with little success. In 2014, the Multiemployer Pension Reform Act was enacted to help funds develop rescue plans, including by reducing benefits to retirees. In 2015, Central States submitted such a plan to the Treasury Department, but it was rejected the following year on the grounds that the proposed benefit reductions were unlikely to help the fund avoid insolvency.

Mr. Brown and Representative Richard E. Neal of Massachusetts, a Democrat, have pushed an effort that would attempt to stabilize plans with 30-year loans from the Treasury Department, as long as plan managers could demonstrate the money would put them on a path to solvency — and not invest it in risky assets. Fiscal hawks, like the Committee for a Responsible Federal Budget, warn that the bill could leave taxpayers responsible for as much as $100 billion if the loans are not repaid. Backers of the bill say taxpayers should not end up paying a dime.

“This is beyond party affiliation, this really cuts to the root of what retirement is going to look like,” said Mr. Neal, who will be a member of the special committee and has been working to recruit more House Republicans to support his proposal.

Mr. Neal has six Republican co-sponsors on his bill and said that several others have expressed support. A handful of Republican senators have also been engaged on the issue, including Shelley Moore Capito of West Virginia, who said this month that she was pleased the spending bill “recognizes the urgent need to help tens of thousands of retired coal miners.”

The Trump administration has been largely quiet on the situation, but when asked about it at a congressional hearing last week, Steven Mnuchin, the Treasury secretary, noted that it was a “significant” issue and promised to offer technical assistance to support any solution that lawmakers find.

As congressional negotiators homed in on a spending deal early this year, Mr. Brown pushed Senator Chuck Schumer of New York, the minority leader, to attach his pension language to the larger budget agreement. The bill establishes a process to ensure that if the commission produces a bill supported by a majority of its Democratic and Republican members, the Senate will vote on that bill before a new Congress convenes next year.

If concern over retirees is not enough to get lawmakers to act, those who represent pension funds hope that concern about the broader economy will. Michael D. Scott, executive director for the National Coordinating Committee for Multiemployer Plans, projects that if all of the pension plans that are in “critical” and “critical and declining” condition go broke, the federal government would face a half trillion dollars in lost tax revenue over the next decade because of the taxes that the active funds currently pay.