The Disruption This Time

What has made these protests stand out is not their size, though some have been quite large. And this is not the first time protesters have used their bodies to block bridges, tunnels, intersections, and roadways around town. But I can’t come up with another time when protesters have engaged in as much spontaneous and simultaneous disruptive action as they have in the two weeks since Ferguson police officer Darren Wilson was not indicted for shooting Michael Brown. 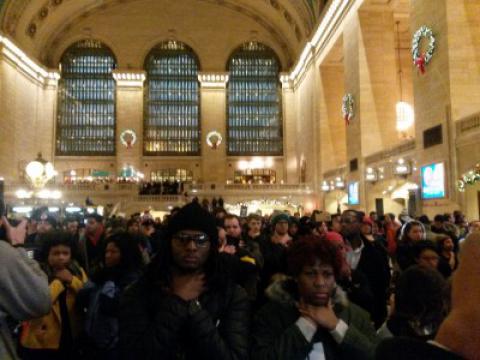 I’ve been attending and observing protests for thirty years, and I’ve never seen anything quite like what I’ve experienced in New York City over the last week.

In the days after a Staten Island grand jury decided not to charge police officer Daniel Pantaleo for the choking death of Eric Garner, thousands of grieving and angry people have marched all over town, taking over streets, blocking intersections, disrupting holiday shopping, and repeatedly overwhelming police attempts to steer or stop their movement. The crowds—impassioned, racially diverse, with on-the-ground tactical direction from young people of color—have not only been venting rage and sorrow at yet another unpunished police killing. Along with their counterparts all across the country, these protesters have been staking out a bold new kind of street action, a fierce and uncompromising activism for our time.

What has made these protests stand out is not their size, though some have been quite large. But far larger numbers have gathered for major protest marches in the past, including the massive antiwar demonstrations of 2003, the Republican National Convention protest of 2004, and last September’s enormous climate march. And certainly this is not the first time protesters have used their bodies to block bridges, tunnels, intersections, and roadways around town. There have even been occasions in the past when coordinated actions blocked multiple sites around the city simultaneously. But try as I might to think of a precedent, I can’t come up with another time when protesters have engaged in as much spontaneous and simultaneous disruptive action as they have in the two weeks since Ferguson police officer Darren Wilson was not indicted for shooting Michael Brown.

The first few nights after the Eric Garner non-indictment, it was nearly impossible to keep track of how many different groups were marching through the city: while one crowd was pouring over the Brooklyn Bridge, another was disrupting the West Side Highway, and another blocking the streets around Times Square. Marches splintered, then rejoined; they met police blockades, and defiantly swarmed around them; they stopped to block key sites, then quickly moved on.  The protests have been mobile and deft, steered by tactically savvy organizers for maximal disruption and minimal arrests. Crowds blockade intersections until the police get antsy, then quickly march off to a new target; they swarm high-profile sites like Grand Central Station and Macy’s Herald Square, disrupt with loud chants, shift to a silent die-in, and then move on.

The tone of these actions has been striking and distinctive, too. The protests I’ve seen in New York have been entirely peaceful (I was in Oakland for the marches after the Michael Brown non-indictment, which is an activist world unto itself). This isn’t a passive kind of peacefulness, though: it has been fearless and resolute. Something about the combination of grief and anger, and the seriousness of purpose with which it is being expressed on the streets, strongly reminds me of the heyday of ACT UP. Now, as then, the protests were led by people taking action with the knowledge that their lives and those of people they know and love were very concretely and immediately at stake. Signs declaring “I Could Be Next” drive the point home.

Most significant of all is who is leading these actions. ACT UP in its heyday was majority white, as were most of the movements of the last thirty years that used disruptive direct action as a central part of their strategy. This style of organized, uncompromising protest was pioneered by the young black activists of SNCC and other cutting-edge civil rights group in the mid-1960s, but many movements of color turned away from it by the early 1970s, opting for other tactics and strategies. The stakes were always higher for black and brown street activists, whether they were taking part in a campus sit-in or marching on the streets; they were far more likely than white activists to be met with police violence, to be charged harshly for minor offenses, and to face serious consequences for interfering with business as usual.

So from the anti-nuclear movement of the 1970s up through the Seattle WTO protests of 1999, disruptive direct action protest became largely a white affair. Movements of color, when they engaged in civil disobedience actions, as they did time and time again, were much more likely to orchestrate them carefully, as a way of ensuring the safety of participants. The protests against South African apartheid organized by TransAfrica in the 1980s are one example; the waves of sit-ins at One Police Plaza after four officers were acquitted of the murder of Amadou Diallo in 1999 are another.

These differences in styles of protest often led to tensions between activists of color and white activists, especially in the relatively rare occasions when they joined together in shared organizing, such as during the anti-apartheid movement of the 1980s. White activists could be stunningly oblivious about why their counterparts of color didn’t want to engage in roving blockades or other high-risk actions. They congratulated themselves on their daring while ignoring the racial privilege that made it possible. Even now, as the issue of police violence has led huge crowds to risk facing police violence by taking over streets and highways nationwide, the risks are very different for the black and brown activists leading the actions and the white protesters joining them in solidarity.

This resurgence of disruptive direct action in people-of-color-led movements didn’t start in Ferguson. There are powerful precedents going back to the Republican Convention protests in Philadelphia in 2000, when young people of color led actions around police brutality and mass incarceration. The massive immigrant rights marches of 2006 and the years of brave defiant action around immigrant detentions and deportations by undocumented immigrants and allies are key to this shift as well. For black activists focusing on police violence and accountability, the summer 2013 acquittal of George Zimmerman for the killing of Trayvon Martin in Florida was a crucial turning point. A month-long occupation of the Florida State Capitol building by the Dream Defenders set a new tone and helped galvanize young organizers of color around the country.

But it’s the tenacious young black organizers on the frontlines in Ferguson, many of them women, who clearly deserve the most credit for the scale and character of this nationwide upsurge. Their risk-taking in the face of the tear gas, rubber bullets, and military gear of the police there—and their strategic use of social media to broadcast their message and methods—have transformed grassroots protest in the United States. In both Ferguson and New York, the protests have been decentralized, with different groups and organizers taking the lead at different points.

All signs indicate that this movement is not letting up; daily actions are planned in New York City for the indefinite future. May the qualities that make this upsurge of activism so unique will make it uncommonly influential as well.

L.A. Kauffman is a longtime grassroots organizer and strategist. She was the mobilizing coordinator for the massive antiwar marches of 2003 and 2004 and recently completed a history of direct action protest from the late 1960s onward. She is on Twitter @lesliekauffman.