Unions historically have supported minimum wage and occupational safety laws that benefited all workers, not just their members. But they also have recently begun investing major resources in organizing drives more likely to yield new laws than new members. Some of these campaigns seek to organize workers who, rightly or wrongly, aren't even designated as employees or lack a common employer, such as domestic workers and cab drivers. 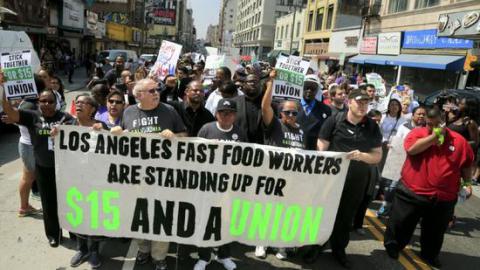 Fast-food workers are joined with other community supporters after marching up Broadway in downtown L.A. during a peaceful demonstration demanding higher wages on Sept. 4. , Los Angeles Times
Haltingly, with understandable ambivalence, the American labor movement is morphing into something new. Its most prominent organizing campaigns of recent years — of fast-food workers, domestics, taxi drivers and Wal-Mart employees — have prompted states and cities to raise their minimum wage and create more worker-friendly regulations. But what these campaigns haven't done is create more than a small number of new dues-paying union members. Nor, for the foreseeable future, do unions anticipate that they will.
Editorial Supreme Court should affirm the rights of pregnant workers Supreme Court should affirm the rights of pregnant workers The Times editorial board Blocked from unionizing workplaces by ferocious management opposition and laws that fail to keep union activists from being fired, unions have begun to focus on raising wages and benefits for many more workers than they can ever expect to claim as their own. In one sense, this is nothing new: Unions historically have supported minimum wage and occupational safety laws that benefited all workers, not just their members. But they also have recently begun investing major resources in organizing drives more likely to yield new laws than new members. Some of these campaigns seek to organize workers who, rightly or wrongly, aren't even designated as employees or lack a common employer, such as domestic workers and cab drivers.
The decision of Seattle's government to raise the city's minimum wage to $15 resulted from just such a campaign. Initially, the city's fast-food workers' campaign, backed by the Service Employees International Union, sought simply to unionize the 4,000 food service workers at Sea-Tac, the city's airport. When the airport's employers refused to bargain, the SEIU put an initiative on the ballot in SeaTac, the small Seattle suburb that is home to the airport, which proposed to raise Sea-Tac's minimum wage to $15. The SEIU had assumed that, when confronted with such a measure, the airport would begin bargaining in exchange for having the measure withdrawn. It didn't. Instead, SeaTac voters approved the measure, and the cause of the low-paid workers so dominated the local media that the following year, the city of Seattle raised its minimum to $15 as well, increasing the incomes of 100,000 workers. In America today, it is becoming easier to win a law raising wages for 100,000 workers than to unionize 4,000.
Wage increases are just some of the gains that unions are winning in the legislative and electoral process. The Taxi Workers Alliance has won more favorable regulations from municipal taxi commissions, although fewer than a quarter of its members pay dues. The National Domestic Workers Alliance has won legislation in four states, including California, that entitles domestics to overtime pay; yet none of its members pay dues (the organization is largely foundation supported). In San Francisco, retail workers, the vast majority of whom are non-union, have prompted the city to adopt an ordinance requiring retailers to regularize part-timers' hours.
For better or worse, the new labor movement is beginning to look a little like the 19th-century Knights of Labor, a workers' organization that didn't seek contracts between workers and their employers, but rather worked to advance workers' interests through legislation. The problem with that model is that the Knights fell apart after two decades, unable to financially sustain itself, while the unions affiliated with the American Federation of Labor, which did have workplace contracts and dues-paying members, managed to survive. This is a problem that today's unions are compelled again to confront: SEIU's fast-food campaign is the prime mover of the minimum-wage momentum sweeping much of the nation, but how many resources can the union afford to spend on a campaign unlikely to generate any new members for the foreseeable future?
Los Angeles could well become the place where this new model of unionism gets its most extensive tryout. Should the City Council establish a municipal minimum wage higher than the state's, more than half a million local workers will see their incomes rise. Some of the city councils in the county's 80-plus other cities will doubtless match that standard, too, but many won't. At that point, the L.A. labor movement — the most strategically savvy in the nation — could put initiatives on the 2016 presidential ballot to raise the municipal minimum in scores of L.A. County cities, and build an organization of thousands of non-union workers to campaign for those measures. That organization could provide the nucleus for a union of low-wage workers — whether or not they have unions in their workplaces or contracts with their bosses — that this city, the capital of poverty-wage work, clearly needs.
Is such an organization possible? Sustainable? If it is, L.A.'s the place where it's most likely to take root.
Harold Meyerson is editor at large of the American Prospect and an op-ed columnist for the Washington Post.