They Fear and They Kill

Official government statistics document that African American young men are killed by the police at a rate quadruple that of the whole population. In the period 1999 through 2011, police officers killed 4,531 people. Marge Piercy, in poem, captures that reality of being young, African American, Hispanic, Asian or Native American Indian, and a police victim. 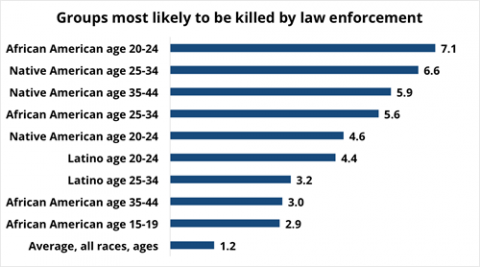 It's open season on wild turkeys.
They harm no one, are decorative
feathered dinosaurs.  Tough to eat,
so why shoot?  But the season ends.

It's open season on Black youths
all year, so long as you have
a uniform and a gun.  They are
genuinely scared, the cops.

Kids of color are going to eat
them.  Unarmed, boys are just
as menacing, just skulking along
in hoodies in the city where few

cops live.  Cellphones are guns,
toy guns are lethal, open hands
could be weapons.  A Black body
itself is a danger to be destroyed.

[Marge Piercy is a poet, novelist, and activist.  She is the author of eighteen poetry books, most recently The Hunger Moon: New & Selected Poems, 1980-2010 (Knopf, 2011).  Her most recent novel is Sex Wars (Harper Perennial, 2005), and she has just published her first collection of short stories, The Cost of Lunch, Etc. (PM Press, 2014).  Piercy is also a frequent contributor to Monthly Review.]