The Ominous ‘Cromnibus,’ A Budget Bill That Should Have Died

Given the acute need for jobs and rising incomes, what passes for “bolstering job creation” in a summary of the budget bill released by the House Appropriations Committee is scandalous. Incredibly, a provision that allows banks to engage in high-risk derivatives trading under the shield of federal insurance is listed as a measure to “bolster job creation.” 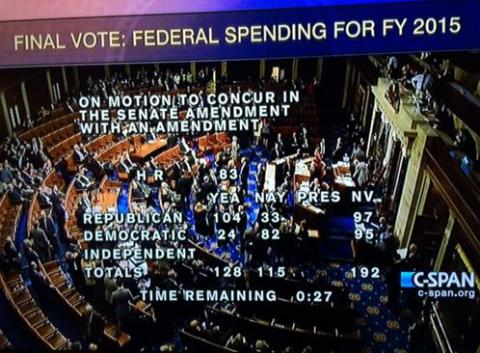 With all of the justifiable anger directed at what’s in the 2015 spending bill – the omnibus continuing resolution or “cromnibus” – that the House struggled to pass late Thursday, there is also a major story to be told about what’s not in the bill. It’s a story of missed opportunities that is as significant as the Wall Street giveaways, the kowtowing to fossil fuel interests and gratuitous swipes at conservative boogeymen that were written into this monstrosity.

Most conspicuous is the absence of any real effort to address the plight of millions of people who remain untouched by the so-called economic “recovery” of the past few years. They are represented by the 51 percent of respondents in a New York Times poll this week who rated the condition of the national economy as either “fairly bad” or “very bad.” In that same poll, only 30 percent saw the economy as getting better.

No wonder: The Bureau of Labor Statistics this week reported that 54 metropolitan areas around the country had unemployment rates in excess of 7 percent in October, even as the national unemployment rate was 5.8 percent. Meanwhile, those in the bottom 90 percent who are working have seen no real wage gains since 2000, as all of the gains and then some from economic growth over the past decade have accrued to the top 10 percent – and most disproportionately to the top 1 percent.

(The Economic Policy Institute on Thursday calculated what it called the “inequality tax” on the middle class, the average income a middle-class household lost by not reaping its share of the gains of economic growth since 1979. In 2011, that “tax” for an average middle-income family was $11,630.)

Given the acute need for jobs and rising incomes, what passes for “bolstering job creation” in a summary of the budget bill released by the House Appropriations Committee is scandalous. Incredibly, a provision that allows banks to engage in high-risk derivatives trading under the shield of federal insurance is listed as a measure to “bolster job creation.” So are several measures that roll back environmental protections or prevent policies that would combat climate change.

Meanwhile, “the bill has no major new investments in infrastructure, despite the need and the potential for job creation. For instance, the bill provides no funding for a proposed high-speed rail project,” said Lindsay Koshgarian of the National Priorities Project, which analyzes federal spending and taxation.

The explicit ban on high-speed rail funding is symbolic of Republican myopia on the economy. There is clear demand for high-speed rail in several high-density population corridors around the country, and the upgrading of our rail networks would create tens of thousands of jobs and revive whole industries in steel, rail cars and engine parts when coupled with a Made-In-America mandate. But on that kind of investment in the future, this is the Budget of No.

Another job-creating industry that would create millions of new jobs and lead the American economy toward a more sustainable future is in alternative energy. But the 2015 budget makes a point of cutting by 16 percent President Obama’s budget request for energy efficiency and renewable energy programs, while appropriating 20 percent more than the president requested on research and development of fossil fuels. That’s right: The budget would spend your tax dollars supporting already massively profitable oil, gas and coal companies perfectly capable of funding their own research, while starving the research and development needed to make the energy sources we need for the future to stave off climate change more viable.

In the Housing and Urban Development budget, Republicans made a point of noting that “no funding is included for any new, unauthorized ‘sustainable,’ ‘livable, or ‘green’ community development programs,” the quotes dripping with condescension.

There are a host of initiatives – key among them the Community Development Block Grant program – that could support economic development in those communities that are experiencing high unemployment. That would include communities like Ferguson, Mo., which not only needs to rebuild after the riots that followed the grand jury refusal to indict the police officer who killed unarmed teenager Michael Brown, but to go further in addressing the economic deprivation that, when added to tensions with the police, became combustible. But these programs are being cut, not expanded. The Community Development Block Grant, which spent $4.3 billion in fiscal 2004, is being capped at just $3 billion in fiscal 2015.

“We’re not investing in people, or in the future,” Koshgarian said. For example, “this bill ignores the President’s Preschool for All request, even though investment in preschool has bipartisan support and is proven effective. Likewise, it includes a token increase in the value of a Pell grant to help low-income students pay for college, but at $5,830, a Pell grant still only pays for a fraction of the cost of a year at a public four-year college.”

Of the total budget, $1.1 trillion, 55 percent is devoted to military spending. “This squeezes out all other priorities, from education to health care to the environment,” Koshgarian pointed out. “We’re valuing business over people across the board: even the Pentagon, which is getting over half of the $1.1 trillion in appropriations, is increasing spending on equipment – funds that will go to defense contractors – while it provides troops with a measly 1 percent pay raise.”

This budget also does nothing to reform our tax code, which allows multinational corporations and wealthy individuals to engage in ever-more-brazen tactics to avoid paying taxes. Instead, it cuts Internal Revenue Service funding, hampering its ability to go after tax cheats. Nor does the budget do anything to give people more retirement security. (In that New York Times poll, 47 percent of respondents said they were “very concerned” about not having enough money for retirement.) In fact, one clause in the budget bill will allow private companies to actually lower pension payments to more than 1 million retirees.

A major reason so many Americans are experiencing economic stagnation is the wrongheaded focus on deficit reduction, when in fact increased government spending in specific areas was needed to ensure that economic growth was more robust and more broadly shared. That’s one more reason this budget’s passage in the House is a travesty, not a triumph.

In an ideal world, this budget would be voted down so that Congress could go back to the drawing board and get its priorities straight. It goes without saying we’re not in that world, and in fact we’ll be a bit further from it when Republicans take control of the Senate in January. What we can do in the meantime is call this budget what it is – a document that shirks the basics of making the economy work for working people while paying fealty to Wall Street and right-wing fetishes – and use it as a rallying cry for the progressive populist takeover of Congress that we must start working toward today.