We must overhaul our current food system in favor of one that not only produces a high-quality product but also treats the workers who make that food with dignity and pays them a wage that will allow them to feed their families as well as we feed our own. 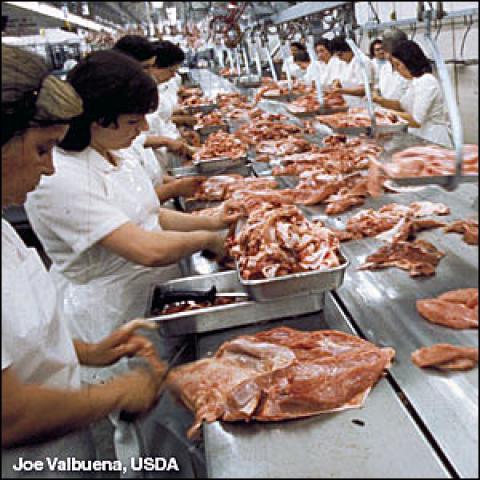 Maria Lopez will never forget that day. It was 2004, the middle of an ordinary shift on the line at Hormel Foods – a sprawling brick-and-concrete complex on the southern edge of Fremont, Nebraska. The worker beside her fed pork shoulders one after another into a spinning saw, just as he did every other day of the week, while Lopez gathered and bagged the trimmed fat to go into Spam. The pace of work had always been steady, but the speed of the line had jumped recently – from 1,000 pigs per hour to more than 1,100 – and Lopez was having trouble keeping up.

As her co-worker reached for another shoulder, Lopez rushed to clear the cutting area, and her fingers slipped toward the saw blade. She snatched her hand back but too late. Her index finger dangled by a flap of skin, the bone cut clean through. She screamed as blood spurted and covered her workstation.

When Lopez returned to Hormel two months later, her finger surgically reattached but still splinted, she claims to have discovered a stomach-turning truth: that while she sprinted to the nurse’s station and was taken to the local hospital, while she waited, finger wrapped, in the emergency room for the surgeon to drive in from Omaha, the cut line at Hormel continued to run.

She says that that hour, like every hour, without interruption, the plant processed 1,100 pigs – their carcasses butchered into parts and marketed as Cure 81 hams or Black Label bacon, the scraps collected and ground up to make Spam and Little Sizzlers breakfast sausages. Her co-workers were instructed to wash the station of her blood, but the line never stopped, never even slowed.

In the last 15 years, a food movement led by the publication of Eric Schlosser’sFast Food Nation and Michael Pollan’s The Omnivore’s Dilemma has emerged in the US. Turning away from low-cost, low-quality fast food, proponents have sparked a consumer revolution that favours local, natural, free-range, humanely raised, sustainable and ethically harvested food.

The movement has been so successful that it has moved from small co-ops and farmers’ markets to large commercial chains such as Trader Joe’s and Whole Foods Market. But converts have tended to focus either on organic and non-genetically modified growing methods as a way of reducing the environmental impact of industrial agriculture, or on writer Temple Grandin’s cruelty-free and humane slaughter standards as a way of mitigating the inherent brutality of meat. Until now, little attention has been paid to the workers who plant and harvest produce in the American south or who work in the high-speed packing houses in the midwest.

The produce industry has always relied on seasonal, low-paid workers, but the undercutting of union labour in meat packing is a relatively new development. Ironically, at the very moment that enlightened eaters were growing obsessed by the idea of “slow food,” the meat industry was becoming overwhelmingly staffed by recent immigrants – many without legal employment status – as a way of pushing production lines to go faster and faster.

Undocumented workers, many from Mexico and other parts of Latin America, formed a perfect corporate workforce: thankful for their pay cheques, willing to endure harsh working conditions, unlikely to unionise or even complain. “They don’t ask for breaks. They don’t ask for raises,” one worker at the Hormel plant in Fremont told me. “They just work harder and harder, because they need to work.”

“I feel thrown away,” one worker told me. “Like a piece of trash.” This comment came at the end of one particularly grim case of worker injury and discrimination at Quality Pork Processors – the exclusive co-packer for Hormel’s flagship plant in Austin, Minnesota – at a part of the kill floor called the “head table”. Every hour, more than 1,300 severed pork heads would go sliding along the belt. Workers sliced off the ears, clipped the snouts, chiselled the cheek meat. They scooped out the eyes, carved out the tongues, and scraped the palate meat from the roofs of mouths.

The last worker harvested the brains by inserting the metal nozzle of a 90lb-per-square-inch compressed-air hose into the opening at the back of each skull, tripping a trigger that blasted the pig’s brains into a pink slurry. (The brains were sold in Asia as a thickener for stir-fry.) But each burst of air was also aerosolising small amounts of porcine brain tissue, which workers were unknowingly inhaling.

In the end, the plant experienced what the US Centers for Disease Control and Prevention classified as an “epidemic of neuropathy”, involving about two dozen employees, nearly all of them Hispanic, including several who sustained permanent brain, spine and nerve damage. Once the cause was clear, the machines were shut off. But after they filed workers’ compensation claims, many say they were fired for not having legal immigration status; some received compensation.

In modern meat-packing plants, the rate of production is set by a chain conveyor system. The chain determines everything about how a day in the plant goes, and workers often talk about it as if it were a living thing, something to be feared.

In 2006 and 2007, when the American mortgage crisis began to peak and then stock markets crashed worldwide, the freedom to run faster production lines positioned Hormel to capitalise on demand the economic downturn created for budget-friendly meat like Spam without significantly increasing its workforce or raising wages to match the elevated output. The industry has been stretched to the breaking point by the drive for cheaper and cheaper meat. And Hormel, in particular, with its runaway demand for Spam and no government regulation to slow things down, has pushed its lines to breakneck speeds.

Consider this: in 2002, Hormel’s production lines were running at 900 pigs per hour; by 2007, they were running 1,350 pigs per hour. That’s a 50% increase in five years, but the number of workers on the line increased by only about 15%. So, obviously, everyone is working harder, working faster, and mistakes occur, like the incident involving Maria Lopez.

Statistically, people who work at any meat-packing plant for five years have a nearly 50-50 chance of suffering a serious injury. And an extensive study of packing-house workers conducted by the University of Iowa in 2008 suggested that the number of injuries may be significantly under-reported. The study found that the large numbers of undocumented workers from Mexico and other parts of Latin America are almost half as likely to report an injury or job-related illness as their white counterparts.

The speed of pork production is not only affecting the health and safety of workers on the line; now lines are moving so fast that the safety of consumers is being placed at risk. Inspectors have discovered pig carcasses with lesions from tuberculosis, septic arthritis (with bloody fluid pouring from joints) and smears from faecal matter and intestinal contents. But the plants were never shut down. The chain never stopped. The US Department of Agriculture’s inspector general warned that these “recurring, severe violations may jeopardise public health” but concluded that because they do not face substantial consequences for repeated food safety violations, “the plants have little incentive to improve their slaughter processes”.

Despite the report, the agriculture department is not only advocating continuing a self-inspection pilot project, but now is proceeding along a path towards implementing it across the US. The government is arguing that the results of the programme are sufficiently encouraging that the US should expand it to more than 600 pork processing plants across America.

Food safety advocates are asking the obvious question: in what sane universe do you make America’s worst violators into the new model? But that’s where we’re headed unless the American public insists that they won’t stand for this any more – and if the agriculture department gets its way, the self-inspection model won’t just become the norm in the US.

In recent years, the department has granted “equivalency status” to select slaughter operations, for both pork and beef, in Canada, Australia and New Zealand. As long as they adhere to the guidelines established by the privatised inspection model being tested in the US, they too can set their own line speeds. And the results in those countries have been the same.

In 2012, one of the participating Canadian packing houses was involved in the largest meat recall in the country’s history, more than 12m pounds of beef in all, after 18 people were sickened by E coli from meat processed at that plant. That same year, the US Food Safety and Inspection Service visited the participating plants in Australia and, according to internal communications, found repeated contamination of meat by faecal and intestinal matter.

In November 2013, the European commission published its own audit of Australian meat from those plants being exported to Europe and concluded that the privatised meat inspection system was not in compliance with EU food safety regulations. In New Zealand, an exposé found that company-employed inspectors were less likely to report problems than their government counterparts –and even threatened government inspectors when they attempted to slow or stop production because of food safety violations.

One government inspector reported “seeing copious amounts of faecal and other contamination being missed by the company inspectors”. When asked the reason, he responded bluntly: “It’s the speed of the chain.”

These cases make it painfully clear that the problems caused by increased line speeds are widespread and systemic. The food movement has brought greater awareness of where our food comes from, but the problem of chain speed will not be solved by buying organic, welfare-approved pork, or by reducing our personal meat consumption, or even by going over to an entirely vegetarian or vegan diet.

As the developed world has eaten less meat in the last decade, the amount of pork consumed in other parts of the world – especially China – has climbed steeply. Big producers like Hormel are hoping to stake out their share of that market, one far larger than those of the US and Europe combined, so the overarching problem persists.

And when the whole system is built around producing cheap meat, it means that fewer and fewer low-income families, even in the developed world, have access to high-quality meat. So it’s not enough to buy grass-fed steaks for your own family and then tut-tut at poor families lined up at McDonald’s or filling their shopping carts with Spam. The way to make food safety a higher priority is not by changing buying patterns but by demanding expanded worker rights through tougher regulation.

To start, because the speed of the chain determines everything about production – from the farms to the factories to the grocery counter – I would like to see government-imposed limits on the rate of production. But we have to insist that our leaders do much more than just that. If we are going to keep meat as part of an ethical diet, then we must overhaul our current food system in favour of one that not only produces a high-quality product but also treats the workers who make that food with dignity and pays them a wage that will allow them to feed their families as well as we feed our own.