Unions have a special duty to help the city heal. We confront a communitywide moral crisis. A simple, broad labor statement of unity — supporting the mayor’s efforts, protesters’ rights in a democracy and the good work of the overwhelming majority of decent police officers, and calling for a new campaign to regulate handguns like the one used to murder two policemen and a citywide dialogue on racism and policing — is in order. 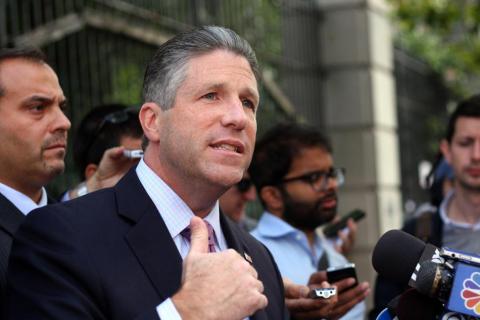 The president of a large police union in New York City blamed protesters for the murder of two police officers. But that's not all, Pat Lynch also says the Mayor of New York is responsible too., www.nationofchange.org

As the leader of the police union has raged, incited and poured rhetorical gasoline on a tense city, every other significant labor union has gone mute. Not one of them seems able, or willing, to speak up and blunt the din unleashed by the PBA at the mayor, protesters and just about anyone who doesn’t share Pat Lynch’s world-view.

That’s unconscionable and threatens to undermine labor in the months and years ahead.

The basic principles that inspired labor’s agenda for generations are antithetical to Lynch’s divisiveness. Farmworkers leader Cesar Chavez once said, “Our ambitions must be broad enough to include the aspirations and needs of others, for their sakes and for our own.”

United Auto Workers President Walter Reuther marched alongside the Rev. Martin Luther King Jr. and gave King office space at union headquarters, where King wrote parts of his 1963 “I Have a Dream” speech. And that tragic moment in Memphis in 1968 was preceded by King’s speech the evening before to striking sanitation workers.

In other words, fundamental to what we in organized labor have fought for is a world in which unions lift up an entire society, advocating not just for a better paycheck but a long list of community needs. Unity, not division, was a guiding principle.

In New York City, the spirit has lived on for many years, largely through the activism and leadership of unions like SEIU 1199, the UAW and the United Federation of Teachers, all of which were active in the protests after the decision not to prosecute in the death of Eric Garner.

First, labor played a critical role in electing Bill de Blasio. Many unions supported him in the Democratic primary — and he had virtually unanimous labor support in the general election.

Standing by while a rogue union leader launches vituperative attacks may weaken public support for the mayor. That could make it harder for him to champion further advances on top of living wage requirements, paid sick leave and universal pre-K, all initiatives benefiting workers and their families, not to mention higher taxes on the wealthy and rent-law protections.

Second, as Lynch’s divisive ranting goes unchallenged, labor’s overall standing is taking a hit. Young people marching in the streets will ask, correctly, why no labor leader contradicted his poisonous rhetoric. That will hurt our ability to build broad coalitions in the future and recruit young, energetic political activists.

Finally, rebuilding the power of labor requires a constant weaving together of the workplace and the rest of life. Tens of thousands of union members care about their wages and benefits. But they also live in communities affected by a whole range of issues, including relationships with the police.

Unions typically, and understandably, defer to each other when it comes to collective bargaining or workplace disputes. That is not what we face today, though Lynch’s statements could be seen as a cynical attempt to deflect from his failure to secure a contract for his members.

Instead, we confront a communitywide moral crisis. A simple, broad labor statement of unity — supporting the mayor’s efforts, protesters’ rights in a democracy and the good work of the overwhelming majority of decent police officers, and calling for a new campaign to regulate handguns like the one used to murder two policemen and a citywide dialogue on racism and policing — is in order.

And, without saying so directly, it would make clear that a lone wolf who does not reflect labor’s values is fueling the current crisis.

In 1967, King gave a powerful speech at Riverside Church explaining his decision to speak out against the Vietnam War at a time when many people said he should remain quiet. He said, “A time comes when silence is betrayal.”

Labor’s silence now is a betrayal.