How to Understand Psychic Violence and Murder - "The Whole Damn System"

[This is the first of a three-part series, Rage Against the Narrative, by Praxis Senior Editor Dr. Lisa Brock. The series is written in response to the uprising sparked by the killings of unarmed black people throughout the US. The three epigraphs below are gestures to each part.]

Part I: "The Whole Damn System"

The uprising in Ferguson, which has spread throughout the country in response to police and state violence against black people, has proven cathartic to a disillusioned and weary populace. In the words of James Baldwin in his 1966 essay, "A Report from Occupied Territory," what was unleashed by Ferguson, was simply an overflow of the "unimaginably bitter cup." Every African-American, almost to a person, has had unprovoked experiences with the police and a relationship in some way with a brutal and unjust Prison Industrial Complex. And every black family and community has experienced violence, frame-ups, and/or unwarranted death at the hands of police and state agencies. African-Americans and their allies of all strata, from youth to professional athletes to congressional aides and middle school children, are standing up because we need to; we have to. We have all been waiting for this moment to collectively speak this "truth to power".

Power, however, is not happy. Resistance is, after all, the ultimate challenge to the master narrative. It reveals for all to see the lies and contradictions in not only the master's actions but also its myths. According to Jean-Fran╪ois Lyotard, Master Narratives or Grand Narratives are the big stories, began during ancestral times that justify society and its power relations. The settlement of the pilgrims, the melting pot, manifest destiny, and capitalism are among the anchors of the US Grand Narrative. The historical plot of police as a benevolent institution that serves and protects is a meta-narrative. It is a story, among many, that supports the grand tale.

What might be called modern police emerged during the early 19th century in largely northern cities where the political party in power controlled the police forces. Hired and fired by mayors, police chiefs would order their men to engage in political campaigning and to harass political opponents. Police were also instructed to engage in social welfare for white citizens in order to maintain party loyalty and secure white male votes. By the latter 19th century, as black and immigrant numbers increased in the cities, fighting street crime, preserving "social order," and protecting the property of the mercantile classes became the primary tasks of police forces. As Police Studies scholar Gary Porter has noted, "What constitutes social and public order depends largely on who is defining those terms." I would add to that, crime. Crime was largely defined as the petty theft and disturbances of the working classes. 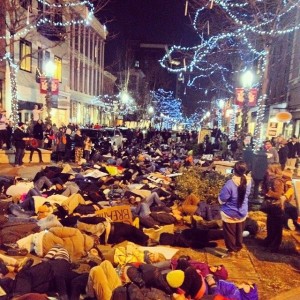 In the south, securing property was also the goal. But Africans were that property.  Slave patrols began in colonial America and were among America's first police forces. Their job was to apprehend runaway slaves, deliver brutal and often public punishment to those that challenged authority, and to put down slave resistance. As Sally E. Hadden has noted, "most law enforcement, was by definition, white patrolmen watching, catching or beating black slaves." After the Civil War, the Ku Klux Klan and white vigilantes took over this role in an attempt to prevent blacks from voting and exercising their 14th and 15th amendment rights.

As reconstituted southern states "rose again" in the words of Jefferson Davis, the job of local police was largely to maintain white supremacy and segregation. They also "criminalized" blacks through a corrupt system of fining and arrest for breaking trumped up laws such as spitting on the street or walking too close to white women. This was done to provide uncompensated labor for the convict lessee system, in which hundreds of thousands of blacks were "sold" for a fee by local municipalities to farms and industries. White planters, the coal mining industry and US Steel benefitted tremendously from this labor force.  According to the University of Houston's Digital History Library, nearly 73% of all revenue in Alabama in 1898 was generated from this system.

The meta-narrative of police today is built on these two legs. It is clear from Ferguson and beyond, that though much has changed, much has stayed the same. Here are but three of many examples. It was discovered after the shooting of Mike Brown that black Ferguson residents are gratuitously fined and arrested in order to fund the city coffers, making up 21% of the city's annual revenue. This is suspected to be the case in many poor municipalities today.

Second, "crime" continues to be construed in such a way that "breaking the law" is something primarily the poor and working classes do. Politicians, corporate bankers and government agents who declare war, engage in massive fraud and engage in torture are not characterized as criminals who should be arrested and jailed in the US. When I raised this contradiction with family members over the holiday, they laughed. "Not going to happen," they said.

Third, the brutal police response to the initial protest in Ferguson is clearly the result of the notion to maintain social order at all cost. It also exposed the highly militarized arsenal that local police now have at their disposal. Moreover, the near universal condemnation of the media to "looting" is connected to the reification of property and its protection. Capitalism is an anchor in the Grand Narrative of the US, and a huge part of the meta-narrative of the police is to protect it.

While the police are publicly touted as a force that fights crime and serves and protects, they are also a racist institution - whether they have officers of color or not - that regulates majority black communities very much like they did during slavery and Jim Crow. In recent polls taken by newspapers such as the Washington Post and Gallup, it appears that most white Americans actually believe the meta-narrative of police serving and protecting all equally. Yet, I would argue, if asked a slightly different question many would also say that the protection of citizens [largely raced white] from the criminal gangs and scary thugs [largely raced black and brown] is a primary function of police as well.

What many Americans might not know is that the trope of the scary black thug is simply that, a device born of politicians, Hollywood, record labels and the news media. Another meta-narrative so deeply constructed over the last thirty years that it has come to undermine a sense of common humanity across the racial chasm. White fear of the black thug led to the killing of innocent youth such as Renisha McBride (Detroit suburb), who had a car break down, and Jonathan Ferrell  (Charlotte, NC), who was in a car accident. Both were simply looking for help from white citizens.

George Zimmerman successfully deployed this trope in his defense of the murder of Trayvon Martin and so did Darren Wilson, the police officer in Ferguson who killed 18-year-old Mike Brown. Among other things, Wilson said this in his testimony to the grand jury: "when I grabbed him, the only way I can describe it is I felt like a 5-year-old holding onto Hulk Hogan.and he had the most intense aggressive face.it look[ed] like a demon." Sadly, these are just a few cases where white fear of the dangerous black thug is a play in actual murder and legal defenses. Even more disturbing, though, is the fact so many juries believe it.[1]

On a relevant note: in a die-in in Kalamazoo, Michigan, on December 5, 2014, as nearly 400 people lay quietly on the ground, a man walks by and breaks the silence with this, "I support law enforcement because they keep me safe from thugs like you."

James Baldwin, in his Nation essay mentioned above, was writing about Harlem as the occupied territory that exploded in rebellion in 1964 for the exact same reason that Ferguson did in 2014. What Baldwin penned then could have been written today.

"This is why those pious calls to `respect the law,' always to be heard from prominent citizens each time the ghetto explodes are so obscene. The law is meant to be my servant and not my master, still less my torturer and my murderer. To respect the law, in the context in which the American Negro finds himself, is simply to surrender his self-respect." 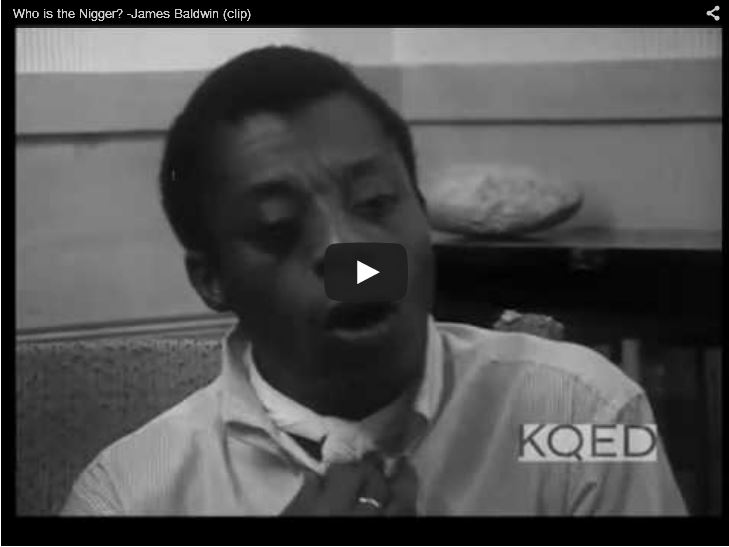 [1]This trope of the black thug serves a similar function to the black rapist of white women 100 years ago for which many black people were lynched.(http://www.kzoo.edu/praxis/rage-against-the-narrative-1/#_ednref1)

[Lisa Brock, Academic Director Arcus Center for Social Justice Leadership, and Senior Editor of Praxis. Dr. Brock is a historian who is attentive to the way current issues have deep historical roots but are often overlooked or negated in popular renderings.  Her articles on Africa and the African Diaspora have appeared in dozens of academic journals and as book chapters. Lisa is also on the editorial collective of the Radical History Review and the Board of the  Davis Putter Scholarship Fund. An activist all her life, Lisa has fought for girls' rights and Black rights in her native Cincinnati, Ohio area and against police violence and judicial misconduct in Washington D.C. She became a leader in the anti-apartheid movement in Chicago and lived in Mozambique as a Fulbright Scholar where she successfully merged her academic interest with southern African Social Justice struggles. She worked to co-found the Chicago Anti-Apartheid Movement Collection at Columbia College Chicago (CCC) and led the effort to endow an international travel scholarship at CCC. She also successfully developed study abroad programs in South Africa and Cuba. As an historian and activist, Lisa is an internationalist who views history as a way to enter contemporary discussions about race, class, gender, and global inequalities. Lisa attended Oberlin College and earned her B.A. from Howard University and her Ph.D. in African History from Northwestern University.]