Over the last few decades, productivity has grown substantially, but the hourly compensation of the typical worker has grown much less. Any effort to reestablish a link between pay and productivity growth will need to promote policies that enable workers to once again join unions and bargain collectively. 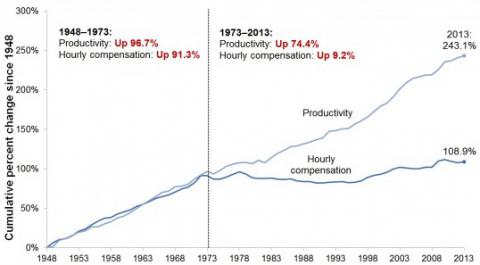 To understand the growth of income inequality—and the disappointing increases in workers’ wages and compensation as well as middle-class incomes—it is crucial to understand the divergence of pay and productivity.

Productivity growth, which is the growth of the output of goods and services per hour worked, provides the basis for the growth of living standards. Productivity and compensation (wages and benefits) of the typical worker grew in tandem over the early postwar period until the 1970s. In contrast, over the last few decades, productivity has grown substantially, but the hourly compensation of the typical worker has grown much less, especially in the last 10 years or so. In fact, the gap between productivity and compensation growth for the typical worker has been larger since the early 2000s than at any point in the post–World War II period. As such, the last 10 years have been a “lost decade” for American workers. In this light, it is more accurate to say that productivity provides the potential for growing living standards because there is no guarantee that productivity gains will be widely shared.

The productivity–pay gap
The hourly compensation of a typical worker grew in tandem with productivity from 1948 to 1973. That can be seen in Figure A, which presents both the cumulative growth in productivity per hour worked of the total economy (inclusive of the private sector, government, and nonprofit sector) since 1948, and the cumulative growth in inflation-adjusted hourly compensation for private-sector production/nonsupervisory workers (a group comprising over 80 percent of all workers).

After 1973, productivity grew strongly, especially after 1995, while the typical worker’s compensation was relatively stagnant. Specifically, productivity grew 74.4 percent since 1973, while the hourly compensation of a typical worker grew just 9.2 percent. This divergence between pay and productivity growth has meant that workers are not fully benefiting from productivity improvements. The economy—specifically, employers—can afford much higher pay, but is not providing it. This is because policy choices made on behalf of those with the most income, wealth, and power have suppressed wage growth for the vast majority.

Conclusion
Any effort to reestablish a link between pay and productivity growth will need to promote policies that enable workers to once again join unions and bargain collectively. This conclusion is central to any debate about how to address ongoing income inequality or limited income mobility. It is only once workers have the ability to bargain for higher wages that we will see the broad-based wage growth necessary to remedy these problems.

A note on measurement
State productivity is based on the Bureau of Economic Analysis’ (BEA) measure of each state’s gross state product and of nonagricultural employment. Each state’s productivity is adjusted to reflect differences in the national trends of total hours worked in the economy and nonagricultural employment. The result is a measure of productivity per hour worked. State median wages were calculated using the Outgoing Rotation Group files of the Current Population Survey. These are converted to measures of median compensation by multiplying by the ratio of compensation to wages for each state and year using BEA data.

About the authors
David Cooper is an economic analyst with the Economic Policy Institute. He conducts national and state-level research on a variety of issues, including the minimum wage, employment and unemployment, poverty, and wage and income trends. He also provides support to the Economic Analysis and Research Network (EARN) on data-related inquiries and quantitative analyses. David has been interviewed and cited by local and national media for his research on the minimum wage, poverty, and U.S. economic trends. His graduate research focused on international development policy and intergenerational social mobility. He holds a Master of Public Policy degree from Georgetown University.

Lawrence Mishel, a nationally recognized economist, has been president of the Economic Policy Institute since 2002. Prior to that he was EPI’s first research director (starting in 1987) and later became vice president. He is the co-author of all 12 editions of The State of Working America. He holds a Ph.D. in economics from the University of Wisconsin at Madison, and his articles have appeared in a variety of academic and non-academic journals. His areas of research are labor economics, wage and income distribution, industrial relations, productivity growth, and the economics of education.