Lawmakers must stop functioning as handmaidens to the rich in an economic scheme that has failed the 99 percent from the very day the 1 percent got Ronald Reagan to buy it. 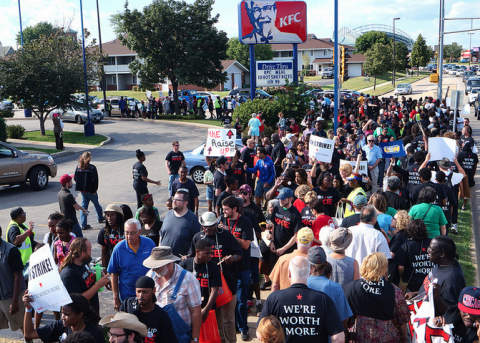 As corporate profits soar with the help of politicians and trickle-down economics, working wages have barely increased over the past 35 years., Light Brigading / Flickr

The jobs report Friday set off cheering: a quarter million positions added in December; unemployment declining to 5.6 percent. This good news arrived amid a booming stock market and a third-quarter GDP report showing the strongest growth in 11 years.

It’s all so very jolly, except for one looming factor: wages. They’re not rising. In fact, they fell in December by 5 cents an hour, nearly erasing the 6-cent increase in November.

Hard-working Americans need a raise. Their wages are stuck, rising only 10.2 percent over the past 35 years. Workers are producing more. Corporations are highly profitable. CEOs, claiming all the credit for that as if they did all of the work themselves, made sure their pay rose 937 percent over those 35 years. That’s right: 937 percent!

It doesn’t add up for workers who struggle more every year. Something’s gotta change. The AFL-CIO is working on that. It launched a campaign last week to wrench worker wages out of the muck and push them up.

At a summit called Raising Wages held in Washington, D.C., last week, AFL-CIO President Richard Trumka said, “We are tired of people talking about inequality as if nothing can be done. The answer is simple: raise the wages of the 90 percent of Americans whose wages are lower today than they were in 1997.”

The meeting attended by 350 union representatives, community group officials, economic experts and religious leaders was the first of many that will be conducted across the country by the AFL-CIO to spotlight the pain and problems that wage stagnation causes. The AFL-CIO will begin these meetings in the first four presidential primary states—Iowa, New Hampshire, Nevada and North Carolina.

The idea is to ensure that candidates, Republican and Democrat, can’t squirm out of dealing with the issue. And Trumka said labor won’t tolerate sappy expressions of sympathy. The federation will demand concrete plans for resolution.

At the same time, the AFL-CIO and allies will push for federal legislation to seriously punish employers who illegally retaliate against workers and to provide real remedies for workers unjustly treated.

At the summit, workers told their stories alongside experts. Among them was Colby Harris, who suffered illegal retaliation. A member of OUR Walmart, he was fired last year after participating in strikes for better conditions.

“They are trying to silence people for saying we need better wages and benefits. The average Walmart worker makes less than $23,000 a year. These companies have no respect for their workers,” Harris told the group.

Another speaker, Lakia Wilson, said that workers can do everything right, work hard, follow all the rules and still lose out in this economy. The Detroit native earned a bachelor’s degree in education and a master’s in counseling. While serving as a school counselor, she took a second job as an adjunct professor at a community college to make enough money to qualify for a home mortgage.

But then, in a cutback at the college, she was laid off. She lost the extra income, and the bank began foreclosure. It was, she said, a horrible, humiliating experience. She cashed out her retirement to save her home. Now her credit and retirement are shot. This happened to her, and to so many others, she said, even though they “did everything necessary to get a good job and get the American dream.”

U.S. Sen. Elizabeth Warren talked to summit attendees about why the economy does not work for people like Wilson and Harris. Though this economy is splendid for those who own lots of stock, it’s not for the vast majority of workers who get their income from wages.

Sen. Warren pointed out that the economy didn’t always work this way. From the 1930s to the 1970s, she said, workers got raises. Ninety percent of workers received 70 percent of the income growth resulting from rising productivity. The 10 percent at the top took 30 percent.

Since 1980, however, that stopped. Ninety percent of workers got none of the gains from income growth. The top 10 percent took 100 percent. The average family is working harder but still struggling to survive with stagnant wages and growing costs.

The rigging was adoption of Ronald Reagan’s voodoo trickle-down strategy.  That economic plot puts massive corporations, Wall Street and the 1 percent first. Politicians bowed down to them, legislated for them, deregulated for them. In return, the wealthy were supposed to chuck a few measly crumbs down to workers.

They did not. Workers got nothing.

Despite that, workers still get last consideration. That, Sen. Warren said, must be reversed.

Accomplishing that, clearly, is a David vs. Goliath challenge. David won that contest, and workers can as well—with concerted action. Papa John’s worker Shantel Walker told the summit such a story—one of victory against a giant with collective action.

She discovered that a teenager at the New York franchise where she worked was putting in time that was not clocked. The restaurant was stealing wages.

Walker helped organize a protest at the restaurant. Between 80 and 100 people rallied for justice for the young worker. And they won. The restaurant paid the teen. “Now is the time to stop the poverty wages in America,” Walker said; “Raise the wage!”

Trumka said the AFL-CIO and its allies will demand that of lawmakers. He said they would insist that legislators “build an America where we, the people, share in the wealth we create.”

For that to occur, lawmakers must serve the vast majority first. They must stop functioning as handmaidens to the rich in an economic scheme that has failed the 99 percent from the very day the 1 percent got Ronald Reagan to buy it.

The AFL-CIO and its allies intend to help lawmakers see that they must prioritize the needs of America’s workers.

Leo Gerard is the president of the United Steelworkers International union, part of the AFL-CIO. Gerard, the second Canadian to lead the union, started working at Inco's nickel smelter in Sudbury, Ontario at age 18. For more information about Gerard, visit usw.org.