The assumption in German Chancellor Angela Merkel's entourage before Sunday's Greek election was that Tsipras, the charismatic leader of the far-left Syriza party, would eke out a narrow victory and shift quickly from confrontation to compromise mode. Instead, after cruising to victory and clinching a fast-track coalition deal with the right-wing Independent Greeks party, he has signalled in his first days in office that he has no intention of backing down. 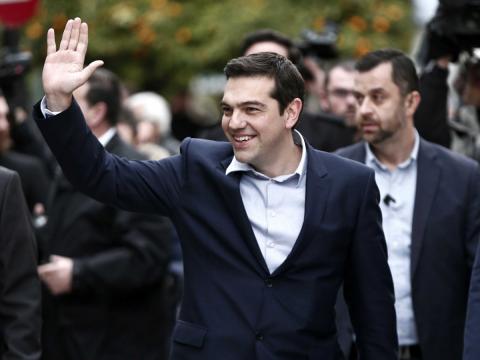 Newly appointed Greek prime minister and winner of the Greek parliamentary elections, Alexis Tsipras, waves as he arrives for a swearing in ceremony by members of his cabinet at the presidential palace in Athens, Jan. 27, 2015., Alkis Konstantinidis/Reuters

In his first act as prime minister on Monday, Alexis Tsipras visited the war memorial in Kaisariani where 200 Greek resistance fighters were slaughtered by the Nazis in 1944.

The move did not go unnoticed in Berlin. Nor did Tsipras's decision hours later to receive the Russian ambassador before meeting any other foreign official.

Then came the announcement that radical academic Yanis Varoufakis, who once likened German austerity policies to "fiscal waterboarding," would be taking over as Greek finance minister. A short while later, Tsipras delivered another blow, criticizing an EU statement that warned Moscow of new sanctions.

The assumption in German Chancellor Angela Merkel's entourage before Sunday's Greek election was that Tsipras, the charismatic leader of the far-left Syriza party, would eke out a narrow victory, struggle to form a coalition, and if he managed to do so, shift quickly from confrontation to compromise mode.

Instead, after cruising to victory and clinching a fast-track coalition deal with the right-wing Independent Greeks party, he has signalled in his first days in office that he has no intention of backing down, unsettling officials in Berlin, some of whom admit to shock at the 40-year-old's fiery start.

"No doubt about it, we were surprised by the size of the Syriza victory and the speed with which Tsipras clinched a coalition," said one senior German official, who requested anonymity because of the sensitivity of the issue.

Another said Tsipras's choice of coalition partner and finance minister were "not good signs," while a third admitted to being "stunned" by the Greek leader's first days in office.

Officials close to Merkel say they still believe Tsipras will ultimately change course, dropping his more radical election pledges and signing up to the economic reforms that Berlin and its European partners have insisted on as a condition for handing over more aid that Athens desperately needs by next month to service its debt.

But the past days have sown doubts about this hypothesis.

Over the past 24 hours, his government has put two big privatizations, of Piraeus port and Greece's biggest utility, on ice, and his ministers have pledged to raise pensions and rehire fired public sector workers.

In response, German economy minister and deputy chancellor Sigmar Gabriel criticized Athens on Wednesday in unusually stark terms for halting the privatizations without consulting, and he issued a warning to Tsipras that the eurozone could survive without Greece.

"We no longer have to worry like we did back then," Gabriel said, when asked about contagion if Greece were to exit the single currency bloc.

Marcel Fratzscher, head of the DIW economic institute in Berlin and a former official at the European Central Bank, said Tsipras was playing a "very dangerous game" by coming out with all guns blazing.

"If people start to believe that he is really serious, you could have massive capital flight and a bank run," Fratzscher said. "You are quickly at a point where a euro exit becomes more possible."

Officials point to a Brussels summit of European Union leaders on Feb. 12-13 as a first key test of Tsipras.

The other major area of concern for Germany is a new Greek government's stance on Russia.

Tsipras' meeting on Monday with the Russian ambassador, who handed over a personal letter of congratulations from Vladimir Putin, and the new Greek leader's howls of protest at the EU statement on Ukraine, have raised questions about whether the bloc's fragile consensus towards Moscow can hold.

Even before Tsipras took power, officials in Berlin were worried about keeping countries like Italy on board for Russia sanctions, which must be renewed in mid-2015.

Now the fear is that Tsipras, Italian Prime Minister Matteo Renzi, and skeptical Eastern European countries like Slovakia and Hungary, could band together against an extension, and a ratcheting-up of sanctions in response to a new advance by pro-Russian rebels on the strategic Ukrainian port of Mariupol.

Prying Tsipras away from his European partners on the Ukraine issue would be a coup for Putin. Some officials fear the Russian president could go so far as to offer Greece the financial support it needs to meet its debt obligations as a carrot.

One senior German official described Tsipras as part of a brash new generation of European leaders, including Italy's Renzi, who weren't afraid to stand up to Merkel and challenge the assumptions that have shaped policy in the eurozone and Ukraine crises in recent years.

"He doesn't come from the establishment, he's unvarnished, confident and capable of rallying the public behind his course," the official said. "It's clearly not going to be easy with him."

No one can say the signs weren't there in the run-up to the election.

Only days before the vote, Tsipras told thousands of people at a campaign rally in Athens: "On Monday, our national humiliation will be over. We will finish with orders from abroad."

In the background loudspeakers blared lyrics from the Leonard Cohen song "First we take Manhattan, then we take Berlin."