An Internet in the Crowd, Not the Cloud

An experimental browser shows how peer-to-peer technology can serve up entire websites, not just individual files. 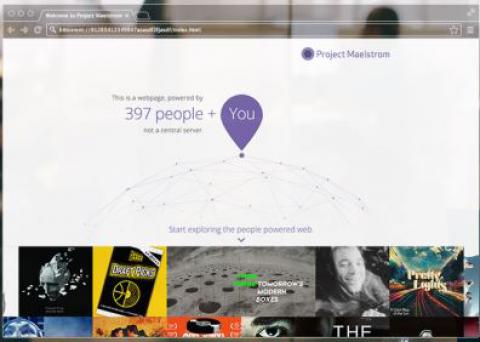 An experimental new Web browser makes it possible for sites to be hosted not on a company’s servers but, instead, by a shifting crowd of individuals on their personal computers. That turns the usual approach to serving up websites on its head and could provide a more effective and reliable way to disseminate bulky media files or distribute vital information in the event of natural disaster.

The new approach is being tested by BitTorrent, the company behind the file-sharing protocol of the same name. It has developed a modified version of Chromium, the open-source version of Google’s Chrome browser. The effort is known as Project Maelstrom.

The Maelstrom browser can access conventional websites. But it can also be used to publish and browse websites that don’t reside on any particular server, known as torrent Web pages. To access a site published in that way, the browser grabs the data from the browsers of people who are already viewing it or have visited the site recently.

This peer-to-peer method makes it possible to deal very efficiently with large crowds and provides resistance against denial-of-service attacks that shut down sites by bombarding them with traffic, says Rob Velasquez, a product manager at BitTorrent. After a new torrent site is published, the browser of the first person to visit must retrieve it from the computer of the person who created it. But the third person has two sources to draw the data from, and as more and more people visit the site, the number of sources grows accordingly.

“When a website is not prepared for a massive load of users, its server just goes down,” Velasquez says. “That doesn’t happen with BitTorrent—the more visitors viewing a page, the more users a person has to download that file from.”

A couple of thousand Web developers are already testing out the Maelstrom browser, says Velasquez. One of them has developed a plug-in for the WordPress blogging software that powers more than a fifth of the Web, making it easy to publish a post as a torrent Web page. For now, pages published that way have to be relatively simple, but they can contain media such as video or podcast files.

BitTorrent believes the Maelstrom technology could appeal to entertainment artists and publishers as a way to efficiently distribute their content. Getting fans to do the work of distributing bulky data such as music or video files would keep them from having to spend on conventional centralized servers and other infrastructure needed to create a reliable media service, says Velazquez.

Video sites like Netflix—which alone accounts for more than a third of U.S. downloads at peak hours—could also benefit from the technology, he says. For example, a video site might detect whether a person was using a Maelstrom-capable browser and use that approach opportunistically to reduce costs.

It might be difficult to persuade many people to download a new browser or other software just to gain access to Maelstrom technology, or existing browser makers to adopt it themselves. But although its technology is associated with unauthorized file sharing, BitTorrent has already attracted big publishers to an earlier experiment in rethinking how online content is distributed: a format called “BitTorrent bundles.” Thom Yorke, Madonna, and other artists now use it to distribute music and video directly to fans, bypassing iTunes and other stores (see “Pirate Favorite BitTorrent Offers a New Way to Pay for Music”).

Sharad Mehrotra, a computer science professor at the University of California, Irvine, agrees that Maelstrom could be a more efficient way to move video around. There is a mature market in services called content delivery networks, or CDNs, which distribute content in many different places so everyone gets relatively fast access, he says, but they don’t come free.

The Maelstrom browser might also provide a way to keep vital online information flowing in an emergency, says Mehrotra. Several years ago, he was part of a team at UC Irvine that developed experimental peer-to-peer software called Flashback, which functioned much like Maelstrom. The city of Los Angeles funded the work under a grant exploring ways to keep citizens informed after earthquakes and other disasters.

In a situation like that, government websites budgeted to serve only a few visitors would suddenly need to handle large crowds. “With this peer-to-peer approach,” Mehrotra says, “you get scalability from your growing traffic.”

Tom Simonite: I’m MIT Technology Review’s San Francisco bureau chief and enjoy a diverse diet of algorithms, Internet, and human-computer interaction with chips on the side. I lead our coverage of new ideas from Silicon Valley, whether they spring from tech giants, new startups, or academic labs.

My journey to the West Coast started in a small English market town and took in the University of Cambridge, Imperial College London, and five years writing and editing technology news coverage at New Scientist magazine.