As mayor of Chicago, Rahm has unleashed an unprecedented attack on working families, especially the poor and people of color. 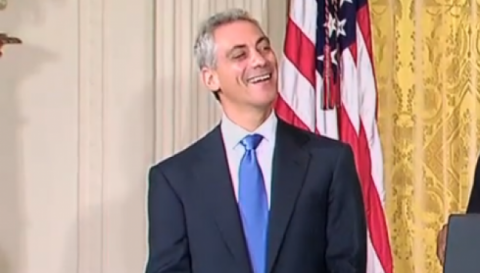 Can you say “Democrat civil war”? How about “progressive civil war”? Howard Dean and brother Jim, the founder and chairman respectively of the progressive PAC Democracy for America, have declared war on…Rahm Emanuel.

Yes, you read that right. The PAC founded by Howard Dean — the former Democratic governor of Vermont, one-time presidential candidate, and ex-chairman of the Democratic National Committee — has unleashed an angry fundraising email dedicated to electing leftist city council candidates opposed to the notorious Rahm “Rahmbo” Emanuel, the progressive mayor of Chicago and Obama's ex-White House chief of staff. The letter is signed by Jim Dean.

The email in its entirety reads (with all the bold print in the original):

One of the most important elections of 2015 is right around the corner -- and Democracy for America is in the thick of it, defending progressive champions against a notorious corporate Democrat.

That notorious figure is none other than Rahm Emanuel. As mayor of Chicago, Rahm has unleashed an unprecedented attack on working families, especially the poor and people of color. Here are just a few of the terrible things Rahm has done as mayor:

•     He closed half of Chicago's public mental health clinics, leaving many of the poorest and most in need without access to quality, affordable care.

•     He broke his promise of openness, fighting efforts at increased transparency, ignoring community input, and micro-managing the press.

Seven Aldermen -- John Arena, Toni Foulkes, Leslie Hairston, Rick Munoz, Roderick Sawyer, Nick Sposato, and Scott Waguespack -- have taken the lead in fighting Rahm's corporate agenda. Now Rahm is coming after them, using millions of dollars in a Super PAC funded by large corporations to try and defeat these seven progressive Aldermen. Rahm's goal: replace them with cronies who answer only to him and his wealthy backers, rather than to the people.

If Rahm Emanuel wins the mayoral election in February (or a runoff in April), he will have no unified opposition on the City Council. He will be able to kneecap progressive power in Chicago -- just as progressives are winning important victories in cities like Los Angeles, New York, Seattle, and more.

That's why DFA is endorsing these seven Alderman candidates -- who we're calling the Chicago Seven -- and we need your support to defend them and defeat Emanuel.

Chicago DFA members have put out a national call for help to support these seven Alderman candidates under attack from Rahm Emanuel. Will you come to their aid? Stand with the Chicago Seven by chipping in $3 or more today!

DFA is making a significant investment in defending the Chicago Seven. With your help, we are launching a major field campaign in these seven wards. We're recruiting friends, family, and neighbors, launching phonebanks, and canvassing neighborhoods.

This is a grassroots, people-powered operation -- in stark contrast to the top-down, big money, negative campaign that Rahm Emanuel is leading against these progressives.

With your help we can send a strong message to Rahm Emanuel and leaders across America that progressives reject the agenda of privatization, public school closings, and stagnant wages for working families. We will show that we fight for an economy that works for everyone -- and that we will hit the streets and the phones to defend those elected officials who stand with us.

We have less than a month to go before the first round of elections. These seven Alderman candidates need your help today to defend themselves against Rahm Emanuel's attacks. Please chip in $3 or more to help DFA build a people-powered campaign to re-elect the Chicago Seven!

The whole world is watching. Thank you for helping win this important election.