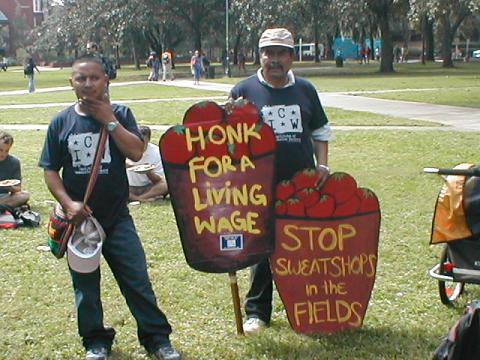 Locally-grown food from small farms, an alternative to food from “factory farms,” has become, thankfully, popular across the U.S, including the area covered by the Atlantic Chapter of the Sierra Club. On Long Island, where I live, Suffolk County remains the top agricultural county in terms of value of annual produce in New York.

But there’s an issue, charges a Long Island professor, not being addressed: the situation of farmworkers at these farms.

Thus, the call “to ‘buy local’ promotes public health at the expense of protecting the well-being of the farmworkers who grow and harvest the much-coveted produce on regional farms.”

When it comes to factory farms, the public hasn’t “been reluctant to recognize the exploitation” of workers. But now being “overlooked” is “the role of hired labor in smallerscale agrifood production.”

“Small farms,” she writes in her book, “like their factory farm counterparts, are largely staffed by noncitizens, immigrant workers.” But “the prevailing mentality within the alternative food movement has not absorbed this reality.”

“Food advocates and their organizations display a tendency,” she goes on, “to conflate local, alternative, sustainable, and fair as a compendium of virtues against the factory farm that they so vigorously demonize. Yet this equation discourages close scrutiny of the labor dynamics by which small farms maintain their operations.”

Dr. Gray is a professor of political science at Adelphi University in Garden City on Long Island.

The situation for farmworkers has long been a scandal in the U.S. The great journalist, Edward R. Murrow, did one of his most important TV documentaries, “Harvest of Shame,” about the plight of migrant farmworkers. Pointedly broadcast on Thanksgiving Day, 1961, it exposed the conditions for, as Murrow said, the  “humans who harvest the food for the best-fed people in the world.” Paid outrageously small sums, exploited by crew leaders who recruited them, housed in awful dwellings, they constituted “workers in the sweat shops of the soil.” And critically, he stressed, laws that protected other workers specifically excluded farmworkers.

Migrant camps in New Jersey, in Suffolk County and in upstate New York were among those that featured prominently in “Harvest of Shame.” Back then, most of the farmworkers in the New York portion of the Atlantic Coast “migrant stream” were black. “From World War II through the early 1970s, the vast majority...were African Americans from the South,” writes Dr. Gray.

“The Hudson Valley, the fabled agricultural region that lies to the north of New York City, is a particularly opposite setting for examining the absence of worker justice within the alternative food movement, as well as the many obstacles that lie in the path of workers’ inclusion in the new food ethic,” she writes. This area’s “cultural identity trades on the the currency of agrarian values and epitomizes precisely those farming sectors that have benefited most from the economic stimulus promised by the alternative and local food movements...The Hudson Valley is thick with food policy centers and is increasingly cited as a model local food system with sustainable relations to populations and resources.”

Farmworkers remain without “the right to organize” unions—“a very significant exclusion,” said Emma Kreyche, organizing and advocacy coordinator for the Worker Justice Center of New York based in Kingston, at a recent symposium at SUNY/College at Old Westbury. It was titled “Healthy Food, Unsustainable Jobs? Farmworkers Fight for Their Rights.”

As examples of the “basic” laws that cover other American workers, she noted that in New York farmworkers “are not entitled to a day of rest, they have no right to have a day off” and do not get overtime pay. Moreover, many of the laws on the books that do cover farmworkers are “poorly enforced.”

Ms. Kreyche distributed a fact sheet put together by the Worker Justice Center of New York (www.wjcny.org) providing details on a “Farmworkers Fair Labor Practices Act” that has been considered by the New York State Legislature—but not passed.

It would establish an eight-hour workday for farmworkers, allow them overtime pay after eight hours of work, provide one day of rest each week, require they be paid the minimum wage and “prohibit child farmworkers from being paid a wage lower than the minimum wage,” have “the right to organize and bargain collectively for the purpose of representing and protecting their interests,” ensure their housing “meets basic standards under the Sanitary Code,” be eligible for unemployment compensation “when laid off from work or terminated” and receive disability benefits.

Dr. Gray, who also spoke at the symposium, commented about the notion “that local farms are wholesome and industrial factory farms are evil.” The situation, the said, is that generally in all kinds of agriculture, farmworkers are “marginalized, excluded from labor laws and work in paternalistic settings” and thus are “afraid to complain.”

As her book concludes: “Buy local!” Yes, “support local farms,” she writes, but at the same time “build a food movement that incorporates workers.” People, she says, should nicely explain to farmers “your food ethic and how it demands fair labor standards to be observed.”

Journalist Karl Grossman is a member of the Long Island Group and professor of journalism at the State University of New York/College at Old Westbury. For nearly 25 years, he has hosted a nationally-aired TV program, Enviro Close-Up.