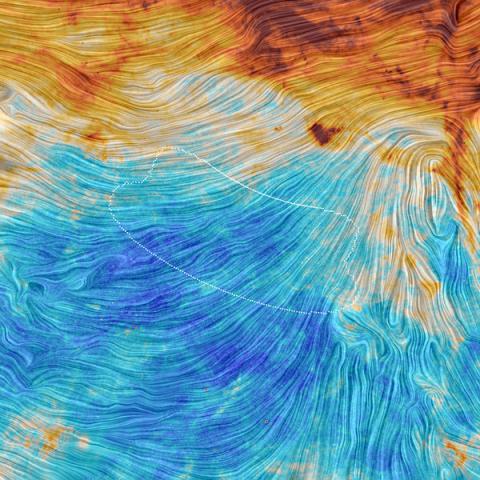 This map highlights a patch of sky that was thought to show the most ancient light in the universe, but is now thought to be dust.,European Space Agency

Scientists will have to wait a while longer to find out what kicked off the Big Bang.

The discovery was heralded as potentially the greatest of the new century, but after months of spirited debate, the group conceded that the result could have been caused by interstellar dust, a notion buttressed by subsequent measurements by the European Space Agency’s Planck satellite that the part of the sky Bicep examined was in fact dusty.

Now a new analysis, undertaken jointly by the Bicep group and the Planck group, has confirmed that the Bicep signal was mostly, if not all, stardust, and that there is no convincing evidence of the gravitational waves. No evidence of inflation.

Scientists are seeking clues from the Bicep2 telescope, foreground, which is based in Antarctica.

“This analysis shows that the amount of gravitational waves can probably be no more than about half the observed signal,” Clem Pryke of the University of Minnesota said Friday in an interview.

“We can’t say with any certainty whether any gravity wave signals remain,” Dr. Pryke added. “Obviously, we’re not exactly thrilled, but we are scientists and our job is to try and uncover the truth. In the scientific process, the truth will emerge.”

When the galactic dust is correctly subtracted, the scientists said, there was indeed a small excess signal — a glimmer of hope for inflation fans? — but it was too small to tell if it was because of gravitational waves or just experimental noise.

The Bicep/Planck analysis was led by Dr. Pryke, one of the four Bicep principal investigators. Brendan Crill, of the California Institute of Technology and a member of Planck, acted as a liaison between the groups. They had planned to post their paper Monday, but the data was posted early, apparently by accident. It was soon taken down, but not before it set off an outburst of Twitter messages and hasty news releases.

A paper is to be posted to the Bicep website and has been submitted to the journal Physical Review Letters.

But it will be far from the final word. A flotilla of experiments devoted to the cause are underway, studying a thin haze of microwaves, known as cosmic background radiation, left from the Big Bang, when the cosmos was about 380,000 years old. Among them is a sister experiment to Bicep called Spider, led by Bill Jones of Princeton and involving a balloon-borne telescope that just completed a trip around Antarctica, as well as Bicep’s own Keck Array and the recently installed Bicep3.

At stake is an idea that has galvanized cosmologists since Alan Guth of the Massachusetts Institute of Technology invented it in 1979. Inflation theory holds that the universe had a violent and brief surge of expansion in the earliest moments, driven by a mysterious force field that exerted negative gravity. It would explain such things as why the universe looks so uniform and where galaxies come from — quantum dents in the inflating cosmos.

Such an explosion would have left faint corkscrew swirls, known technically as B-modes, in the pattern of polarization of the microwaves. So, however, does interstellar dust.

The Bicep group — its name is an acronym for Background Imaging of Cosmic Extragalactic Polarization — is led by John M. Kovac of the Harvard-Smithsonian Center for Astrophysics; Jamie Bock of Caltech; Dr. Pryke; and Chao-Lin Kuo of Stanford. They have deployed a series of radio telescopes at the South Pole in search of the swirl pattern.

Their second scope, Bicep2, detected a signal whose strength was in the sweet spot for some of the most popular models of inflation, leading to a sensational news conference attended by Dr. Guth and Andrei Linde, two of the founding fathers of inflation.

But that was before critics raised the dust question. Moreover, that result was contrary to a previous limit on the strength of gravitational waves obtained by the Planck satellite, which has scanned the entire microwave sky in search of the Big Bang’s secrets.

Planck observed the microwaves in nine frequencies, making it easy to distinguish dust. Bicep2 had only one frequency and lacked access to Planck’s data until last fall, when the two groups agreed to work together.

Dr. Bock of Caltech, in an interview at the end of what he called a long, stressful day, characterized the result as “no detectable signal.”

“I’m not discouraged,” he went on. “We’re going to have to have better data to get a definitive answer.”

In an email, Paul J. Steinhardt, a Princeton cosmologist who was a founder of inflation but turned against it in favor of his own theory of a cyclic bouncing universe, said the new results left cosmologists back where they were before Bicep.

But Dr. Linde noted that there was evidence in the new analysis for a gravitational wave signal, albeit at a level significantly lower than Bicep had reported. “This is what all of us realized almost a year ago, and it did not change,” he said in an email.

The earlier Planck result limiting gravitational waves, he said, had inspired a firestorm of theorizing, in which he and others produced a whole new class of theories relating not just to inflation, but to dark energy as well.

“So yes, we are very excited, and no, the theory did not become more contrived,” he said.

Max Tegmark, an M.I.T. expert on the cosmic microwaves, said, “It’s important to remember that inflation is still alive and well, and that many of the simplest models predict signals just below this new limit.” The next few years will be interesting, he said.

Michael Turner, a cosmologist at the University of Chicago, said he could appreciate the frustration of his colleagues, who have been wandering in the wilderness for nearly four decades looking for clues to the Beginning.

“Inflation is the most important idea in cosmology since the hot Big Bang,” he said. “It is our Helen of Troy, launching a thousand experiments.”