The Lunar Farside and the Cosmic Dark Age 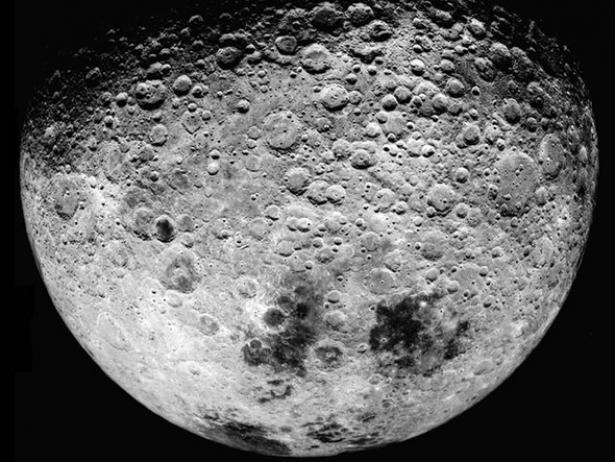 If all goes well, on January 3rd 2019, a robotic lander and rover (the Chang'e 4 mission) built by the China National Space Administration(CNSA) will touch down on the lunar farside. The precise location, the Von Kármán crater, sits inside the much larger Aitken Basin at the southern polar region of the Moon and is a site of intense interest - both scientifically and in terms of exploration and the exploitation of natural resources.

But how do you communicate with a lander and rover that are literally always invisible from Earth, tucked away on the lunar surface? Since the Moon doesn't have a network of communications satellites you have to bring your own. Or rather, in the case of the Chang'e 4 mission, you think ahead and launch a dedicated radio relay months and months ahead of time.

The Moon doesn't have a very convenient geosynchronous/geo-stationary orbit like the Earth - or a selenostationary orbit. In fact, if you put a satellite with an orbital period equal to the lunar day (27.3 Earth days) it'd be sitting some 88,000 km above the lunar surface which is outside the 'Hill Radius' of the Moon - or the zone where there are any stable orbits due to gravitational tidal forces from the Earth and the Sun. Place an object there and it won't stay put for terribly long.

But what the Moon does have is a Lagrange-2 point. Or more accurately, the Earth-Moon system has an L2 point about 64,500 km beyond the lunar farside along a direct line joining planet and moon. This is a location where the centripetal force of the rotating Earth-Moon system balances out the gravitational pull of the two bodies. In other words, you can lurk around this point (in a so-called halo orbit) with very little effort and maintain position above the lunar farside but far enough to the sides to communicate with Earth.

Back in May 2018 the CNSA launched a relay satellite called Queqiao (or 'Magpie-Bridge' after the famous Chinese folktale) to the Earth-Moon L2 point, where it can provide the necessary communications to the farside using a 4.2 meter parabolic antennae.

Except this is not the only thing that Queqiao will be doing. Along for the ride is an experiment called the Netherlands-China Low Frequency Explorer (NCLE), built in collaboration with the Radboud Radio Lab, ASTRON (the Netherlands Institute for Radio Astronomy) and ISIS. This experiment consists of three 5-meter long antennae that will get unfurled after the Chang'e 4 lander and rover carry out their primary mission.

And one of the most tantalizing, and promising cosmic sources is that of the hydrogen gas in the very early universe. Hydrogen atoms can emit photons at a frequency of 1420.4 Mhz (or 21 cm wavelength) - it's a very specific, and very special signal. This emission helps radio astronomers survey the nearby universe for atomic hydrogen - it's one of the ways we've figured out the structures and rotations of galaxies. But if we push to farther and farther objects the emission, just like all other electromagnetic radiation in the cosmos, gets redshifted by the expansion of the universe.

When we get to material that existed between about 377,000 years after the Big Bang and perhaps 10 million years post-Big-Bang - the cosmic 'Dark Age' - the photons being emitted by hydrogen will be redshifted down in frequency by factors of 10 to a 1000 by the time they reach us. That places them right in the band that the NCLE experiment is designed to probe.

This is a tricky part of the radio spectrum for doing astronomy. For example, activity in Earth's ionosphere can still get in the way - and we need to know by how much in order to mitigate that interference. A great way to gauge this is to put the Moon between us and our detector - blocking out most of Earth's noise.

The hope is that the NCLE experiment onboard Queqiao will serve as a pathfinder for far more ambitious projects in the future. One day we may have space-based radio telescopes catching the whispers of the cosmic Dark Age; the calm between the storm of the Big Bang and the coming of the stars. And strangely enough we'll owe something to the lunar farside for that privilege.

Caleb Scharf is a British-born astronomer and the director of the multidisciplinary Columbia Astrobiology Center at Columbia University, New York. He received a B.Sc. in Physics from Durham University and a PhD in Astronomy from the University of Cambridge; he did postdoctoral work in X-ray astronomy and observational cosmology at the NASA Goddard Space Flight Center and the Space Telescope Science Institute in Maryland.