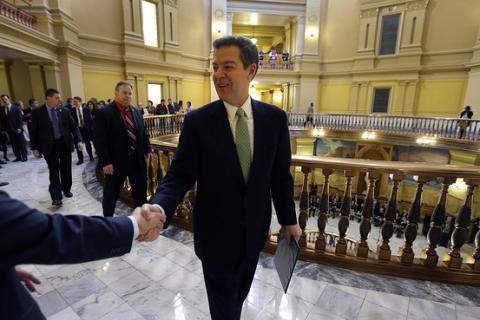 Kansas Gov. Sam Brownback, AP
Can state and local governments in the U.S. boost retirement funds by selling pension bonds and investing the proceeds? The answer, according to the Center for Retirement Research at Boston College, is it depends on when they do it and on when they measure it.
The strategy, which Kansas Gov. Sam Brownback is proposing in the face of a growing state deficit, would help lower annual state contributions to the Kansas Public Employees Retirement System. As detailed in The Wall Street Journal, the state would make a decades-long bet that pension-fund returns will exceed current interest rates for taxable municipal bonds. Kansas officials said interest rates near historic lows make the bonds an attractive way to help manage retirement obligations.
If examined from the stock market highs at the end of 2007, such deals returned an average of 0.8%, the Center said in a report last year. By 2009, however, most pension bonds were a net drain of -2.6%. Thanks to stock market gains following the recession, however, most of the deals were back in positive territory by 2014, returning an average of 1.5%.
Pension-bond deals made at the end of the market run-up in the 1990s, or right before the crash in 2007, have produced negative returns, the report said. Many of the bonds have a 30-year lifespan, meaning the final results won’t be known for years.
“This should be a tool in a well-functioning governments arsenal,” said Alicia Munnell, the Center’s director. “Unfortunately, those that use them tend to be cash-strapped and desperate.”
Matt Fabian, a partner at Concord, MA-based research firm Municipal Market Analytics, said there’s never a good time to make bets with public money, and history suggests public officials don’t always use the money well, adding to the problem. Investors can also perceive the sale of such bonds itself as a warning of financial distress.
“The use of pension bonds impugns an issuer more than a downgrade, because it shows they’re willing to saddle future generations with risk in order to make current budget discussions easier,” he said.
Richard Ravitch, the former New York lieutenant governor who helped save New York from bankruptcy in the 1970s and now sits on the board of The Volcker Alliance, called Kansas’ plan “a dreadful idea.”
“If you cover current obligations by borrowing money, you’re on an unstable course,” said Mr. Ravitch.