Math Score? Depends on Whether the Teacher Knows the Student's Gender

A new study points to the influential role played by teachers’ unconscious biases, but it also highlights how powerful a little encouragement can be for children. 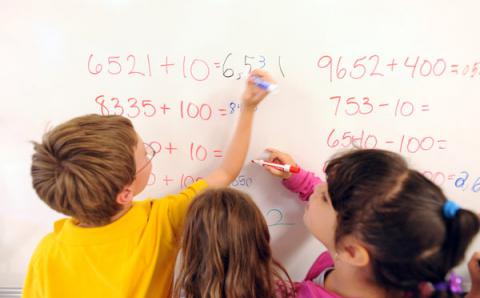 , (Frederic Cirou/PhotoAlto/Corbis
We know that women are underrepresented in math and science jobs. What we don’t know is why it happens.
There are various theories, and many of them focus on childhood. Parents and toy-makers discourage girls from studying math and science. So do their teachers. Girls lack role models in those fields, and grow up believing they wouldn’t do well in them.
All these factors surely play some role. A new study points to the influence of teachers’ unconscious biases, but it also highlights how powerful a little encouragement can be. Early educational experiences have a quantifiable effect on the math and science courses the students choose later, and eventually the jobs they get and the wages they earn.
The effect is larger for children from families in which the father is more educated than the mother and for girls from lower-income families, according to the study, published this week by the National Bureau of Economic Research.
The pipeline for women to enter math and science occupations narrows at many points between kindergarten and a career choice, but elementary school seems to be a critical juncture. Reversing bias among teachers could increase the number of women who enter fields like computer science and engineering, which are some of the fastest growing and highest paying.
A new study points to the influential role played by teachers’ unconscious biases, but it also highlights how powerful a little encouragement can be for children. Credit Erik S. Lesser for The New York Times
“It goes a long way to showing it’s not the students or the home, but the classroom teacher’s behavior that explains part of the differences over time between boys and girls,” said Victor Lavy, an economist at University of Warwick in England and a co-author of the paper.
Previous studies have found that college professors and employers discriminate against female scientists. But it is not surprising that it begins even earlier.
In computer science in the United States, for instance, just 18.5 percent of the high school students who take the Advanced Placement exam are girls. In college, women earn only 12 percent of computer science degrees.
That is one reason that tech companies say they have hired so few women. Last year, Google, Apple and Facebook, among others, revealed that fewer than a fifth of technical employees are women.
“The most surprising and I think important finding in the paper is that a biasing teacher affects the work choices students make and whether to study math and science years later,” said Mr. Lavy, who conducted the study with Edith Sand of Tel Aviv University.
In math, the girls outscored the boys in the exam graded anonymously, but the boys outscored the girls when graded by teachers who knew their names. The effect was not the same for tests on other subjects, like English and Hebrew. The researchers concluded that in math and science, the teachers overestimated the boys’ abilities and underestimated the girls’, and that this had long-term effects on students’ attitudes toward the subjects.
For example, when the same students reached junior high and high school, the economists analyzed their performance on national exams. The boys who had been encouraged when they were younger performed significantly better.
They also tracked the advanced math and science courses that students chose to take in high school. After controlling for other factors that might affect their choices, they concluded that the girls who had been discouraged by their elementary schoolteachers were much less likely than the boys to take advanced courses.
Although the study took place in Israel, Mr. Lavy said that similar research had been conducted in several European countries and that he expected the results were applicable in the United States. The researchers also found that discouragement from teachers in math or science wound up lowering students’ confidence in other subjects at school, showing again the potential importance of nods of encouragement.
The Upshot provides news, analysis and graphics about politics, policy and everyday life. Follow us on Facebook and Twitter. Sign up for our weekly newsletter.
Claire Cain Miller is a writer for The Upshot, the Times site about politics, economics and everyday life. She covers gender, work and family as well as technology and the way it changes our lives. Based in the San Francisco bureau, she previously wrote for the business section, covering Google, e-commerce and start-ups, among other Silicon Valley stories. Her articles have also appeared in The Times’s Science, Styles and National sections and in The New York Times Magazine. Ms. Miller is a graduate of Yale University and the University of California at Berkeley’s Graduate School of Journalism. She is from Portland, Ore. and lives with her family in San Francisco. She can be found on Twitter at @clairecm.