labor The Cost of a Decline in Unions

In this article Kristof acknowledges he was wrong about unions - As unions wane in American life, it’s also increasingly clear that they were doing a lot of good in sustaining middle class life — especially the private-sector unions that are now dwindling. "To understand the rising inequality, you have to understand the devastation in the labor movement,” says Jake Rosenfeld, a labor expert at the University of Washington and the author of “What Unions No Longer Do.” 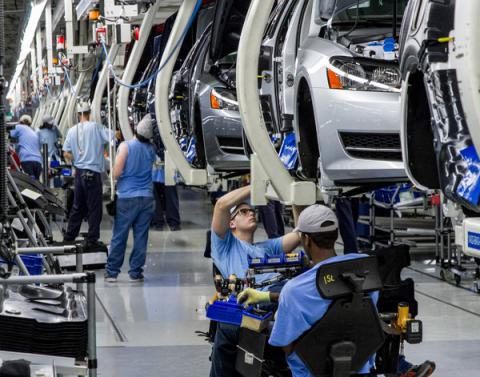 Photo The Volkswagen plant in Chattanooga, Tenn., has had a flurry of union activity the past year. This week, workers seeking an alternative to the U.A.W. succeeded in having their group officially recognized by the German automaker., Erik Schelzig/Associated Press

Like many Americans, I’ve been wary of labor unions.

Full-time union stagehands at Carnegie Hall earning more than $400,000 a year? A union hailing its defense of a New York teacher who smelled of alcohol and passed out in class, with even the principal unable to rouse her? A police union in New York City that has a tantrum and goes on virtual strike?

The abuses are real. But, as unions wane in American life, it’s also increasingly clear that they were doing a lot of good in sustaining middle class life — especially the private-sector unions that are now dwindling.

Most studies suggest that about one-fifth of the increase in economic inequality in America among men in recent decades is the result of the decline in unions. It may be more: A study in the American Sociological Review, using the broadest methodology, estimates that the decline of unions may account for one-third of the rise of inequality among men.

“To understand the rising inequality, you have to understand the devastation in the labor movement,” says Jake Rosenfeld, a labor expert at the University of Washington and the author of “What Unions No Longer Do.”

Take construction workers. A full-time construction worker earns about $10,000 less per year now than in 1973, in today’s dollars, according to Rosenfeld. One reason is probably that the proportion who are unionized has fallen in that period from more than 40 percent to just 14 percent.

“All the focus on labor’s flaws can distract us from the bigger picture,” Rosenfeld writes. “For generations now the labor movement has stood as the most prominent and effective voice for economic justice.”

I’m as appalled as anyone by silly work rules and $400,000 stagehands, or teachers’ unions shielding the incompetent. But unions also lobby for programs like universal prekindergarten that help create broad-based prosperity. They are pushing for a higher national minimum wage, even though that would directly benefit mostly nonunionized workers.

I’ve also changed my mind because, in recent years, the worst abuses by far haven’t been in the union shop but in the corporate suite. One of the things you learn as a journalist is that when there’s no accountability, we humans are capable of tremendous avarice and venality. That’s true of union bosses — and of corporate tycoons. Unions, even flawed ones, can provide checks and balances for flawed corporations.

Many Americans think unions drag down the economy over all, but scholars disagree. American auto unions are often mentioned, but Germany’s car workers have a strong union, and so do Toyota’s in Japan and Kia’s in South Korea.

In Germany, the average autoworker earns about $67 per hour in salary and benefits, compared with $34 in the United States. Yet Germany’s car companies in 2010 produced more than twice as many vehicles as American companies did, and they were highly profitable. It’s too glib to say that the problem in the American sector was just unions.

Or look at American history. The peak years for unions were the 1940s and ’50s, which were also some of the fastest-growing years for the United States ever — and with broadly shared prosperity. Historically, the periods when union membership were highest were those when inequality was least.

Richard B. Freeman, a Harvard labor expert, notes that unions sometimes bring important benefits to industry: They can improve morale, reduce turnover and provide a channel to suggest productivity improvements.

Experts disagree about how this all balances out, but it’s clear that it’s not a major drag. “If you’re looking for big negatives, everybody knows they don’t exist,” Professor Freeman said.

Joseph Stiglitz notes in his book “The Price of Inequality” that when unions were strong in America, productivity and real hourly compensation moved together in manufacturing. But after 1980 (and especially after 2000) the link seemed to break and real wages stagnated.

It may be that as unions weakened, executives sometimes grabbed the gains from productivity. Perhaps that helps explain why chief executives at big companies earned, on average, 20 times as much as the typical worker in 1965, and 296 times as much in 2013, according to the Economic Policy Institute.

Lawrence F. Katz, a Harvard labor economist, raises concerns about some aspects of public-sector unions, but he says that in the private sector (where only 7 percent of workers are now unionized): “I think we’ve gone too far in de-unionization.”

He’s right. This isn’t something you often hear a columnist say, but I’ll say it again: I was wrong. At least in the private sector, we should strengthen unions, not try to eviscerate them.