The issue is violence against children, particularly low income and minority children. But all violence doesn’t come at the end of a gun. Keeping public schools defunded and dysfunctional is also a form of violence. Promoting privatization and competition when kids really need resources is also cruelty. And when society’s evils are visited upon innocent children, teachers alone can’t protect them. 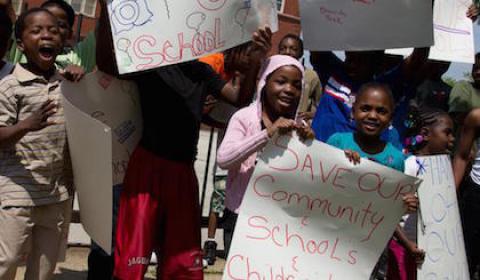 Public school teachers are being called upon to address all forms of violence against children, with few and fewer tools. , Steven Singer

She was smiling and laughing, but her eyes were terrified.

Sitting in class among her fellow middle school students, her words were all bravado. But her gestures were wild and frightened. Tears were close.

So as the morning bell rang and the conversation continued unabated, I held myself in check. I stopped the loud rebuke forming in my teacher’s throat and just listened.

“You know that shooting at Monroeville Mall Saturday night, Mr. Singer? I was there!”

I swallowed. “My gosh, Paulette. Are you okay?”

She acts street smart and unbreakable, but I can still see the little girl in her. She’s only thirteen.

She slowed down and told us what happened; a story framed as bragging but really a desperate plea for safety and love.

She went to the mall with her mother. When they separated so she could go to the restroom, the gunfire began. She ran out and Mom was gone. She was ushered into a nearby store where the customers were kept in lockdown. She stayed there until the police cleared the mall, and it was safe to find her mother and go home.

A seventeen-year-old boy had gunned down three people. One was his target. The others were bystanders—parents who had gotten in the way. Now they were all in the hospital, two in critical condition.

I could imagine how scared she must have been separated from her mother, hiding with strangers as police swept the shops, food court, and children’s play center.

Here she was telling the class her story and getting more upset with each word.

I gave her a meaningful look and told her we’d talk more later. Then I began class.

But I kept my eye on her. Was that relief I saw as the talk turned from bullets and bloodshed to similes and metaphors? Did the flush leave her cheeks as we crafted multi-paragraph theses? I hope so.

I think I know her pretty well by now. She’s been mine for two years—in both 7th and 8th grades. I even taught her older brother when he was in middle school.

I know she’s rarely going to do her homework—and if she does, it will be finished in the last twenty minutes. I know she’d rather be out playing volleyball or cheerleading than in school writing or reading. I know when she’s secure and when she’s scared.

And I know that today’s lesson will be a breeze for her. So why not put her in her comfort zone, show her things haven’t changed, she’s still the same person, she can still do this—nothing is different?

At least, that was the plan.

As any experienced public school teacher knows, you have to satisfy a person’s basic needs before you have any chance at teaching them something new. Psychologist Abraham Maslow’s Hierarchy of Needs is always at the back of mind.

Students must have their physical needs met first—be fed, have a full night’s rest, etc. Then they have to feel safe, loved, and esteemed before they can reach their potentials.

But meeting these needs is a daily challenge. Our students come to us with a wealth of traumas and we’re given a poverty of resources to deal with them.

How many times have I given a child breakfast or bought a lunch? How many kids were given second-hand clothes or books? How many hours have I spent before or after school just listening to a tearful child pour out his heart?

Let me be clear. I don’t mind.

It’s one of the reasons I became a teacher. I want to be there for these kids. I want to be someone they can come to when they need help. It’s important to me.

But what I do mind is doing this alone. And then being blamed for not healing all the years of accumulated hurt.

Because that’s exactly what’s expected of teachers these days. Fix this insurmountable problem with few tools and if you can’t, it’s your fault.

I didn’t shoot up the mall. I didn’t pass the laws that make it so easy for kids to get a hold of a gun. I didn’t pass the laws that allow such rampant income inequality and the perpetuation of crippling poverty that more than half of our nation’s public school children live with every day. And I sure didn’t slash public school budgets while wealthy corporations got a tax holiday.

But when society’s evils are visited on our innocent children, I’m expected to handle it alone. And if I can’t solve it all by myself, I should be fired.

That is where I take umbrage.

The issue is violence but not all of it comes at the end of a gun.

Keeping public schools defunded and dysfunctional is also a form of violence. Promoting privatization and competition when kids really just need resources is also cruelty. Pretending that standardized curriculum and tests are a Civil Right is also savagery.

It’s called class warfare. Its most prominent victims are children. Its most active soldiers are teachers. And we’re on the front lines every day.

When the bell rang to end class, Paulette stopped by my desk.

I looked up at her ready to give whatever support I could. It was my lunch break, but I was willing to skip it and just talk. I’d get the guidance counselor. I’d call home. Whatever she needed.

But none of it was necessary.

“Yeah.” She gave me a big smile and a deep breath.

Today would be alright. Tomorrow? We’ll meet that together.

But we sure could use some help.

NOTE: Names and other minor details may have been changed to preserve anonymity.

[You can read more by Steven Singer at https://gadflyonthewallblog.wordpress.com/author/stevenmsinger/]