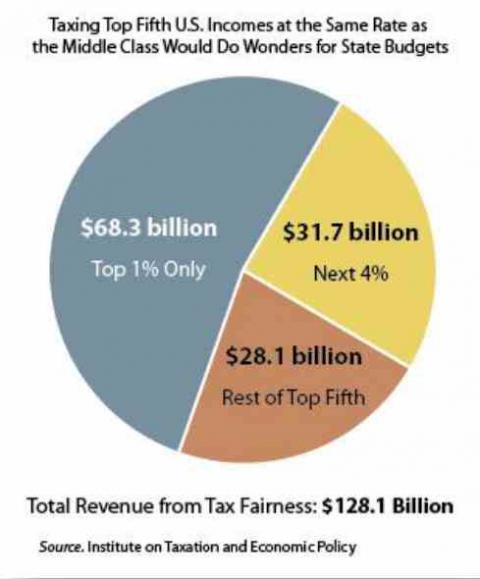 Washington D.C/Harrisburg, PA – As state legislatures prepare to grapple with difficult budget choices, a new report shows that states could generate up to $128 billion in revenue annually by fixing inequities in state and local tax codes. The study argues that surging inequality has skewed huge amounts of income to the top one percent of taxpayers, who pay far lower tax rates than the middle class, squeezing state budgets unnecessarily.

Across all 50 states, the highest-income one percent pay a significantly lower percentage of their income in state and local taxes than those in the middle-income fifth – an average of 5.4 versus 9.5 percent, respectively. The report, Tax Fairness: An Answer to State Budget Problems, by economist Stephen Herzenberg, Executive Director of Keystone Research Center and Greg LeRoy, Executive Director of Good Jobs First, finds that if the top one percent were taxed at the same rate as the middle 20 percent, states and localities would raise $68 billion per year. Similarly, if the top 20 percent paid the same as the middle 20 percent, states and localities would generate $128 billion each year. 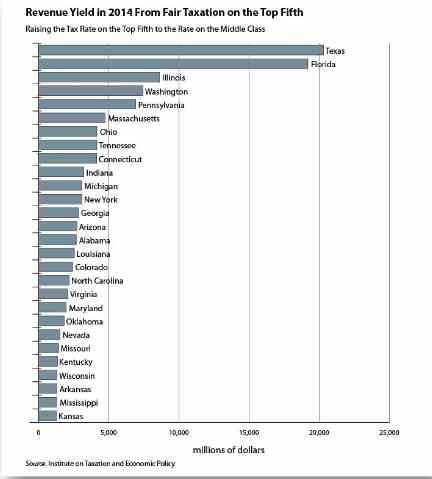 “Revenue lost because of rising inequality and regressive state tax codes has led states to impose years of unnecessary austerity—underfunding schools, cutting investments in higher education, and deferring maintenance of our aging infrastructure.” Herzenberg said. “After 30 years of a middle-class squeeze, it’s time to restore balance.”

Regressive state tax codes have combined with increasing inequality—which drives more income to those with the lowest tax rates—to create a perfect storm for many state budgets. The total annual income of the top one percent in all 50 states now exceeds $2 trillion—$1.1 trillion more than if incomes were still distributed as equally as in 1979. According to the report, this enormous shift in income towards the top one percent is equal to about 1.65 times the total of all 50 state budgets combined.

Instead of fixing their tax codes to address this perfect storm, too many states have done exactly the wrong things. They have made taxes even more regressive and disinvested in public goods—such as education, infrastructure and workforce development—that drive long-term prosperity. Achieving a fair tax structure in which those with top incomes pay the same as the middle class could reverse these alarming trends. For example:

Inequities in state and local tax codes are caused by a variety of factors – the absence of a graduated personal income tax in about a third of states, an over-reliance on regressive sales taxes, and corporate tax breaks and loopholes. States could embrace tax fairness by making income taxes more progressive, preventing companies from using corporate shells to avoid paying income taxes, and imposing small taxes on financial wealth, the study argues.
“Restoring public goods that benefit all employers and all working families is critical to reversing the corrosive rise of inequality,” said LeRoy. “The middle class won’t recover—and states won’t get their finances in order—until we fix our tax codes.”