Cornel West: Gaza Is the Hood on Steroids, Thanks to Israel

“It’s ugly, it’s vicious, it’s brutal” describes Israel in Palestine — and why Gaza is “the hood on steroids” says Cornel West speaking with Stanford Professor David Palumbo-Liu about the divestment effort and Palestinian activism. The interview ranges from how the issue of Israel-Palestine is registering not only with young people, but also with older progressives and intellectuals, and about the linkages between civil rights struggles in the US and abroad. 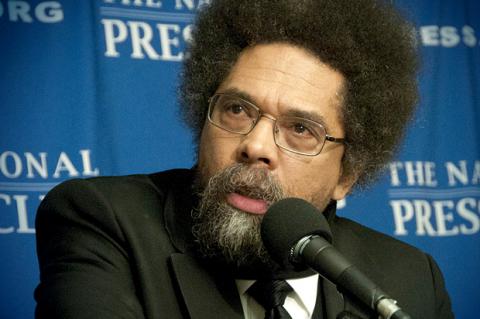 One of the fundamental questions with regard to the critique of — and activism against — the Israeli occupation: How does this connect up with other social movements, and other struggles? Is the case of Israel and Palestine so specific, so complex, as to resist analogy? And if so, what does that mean for those who would be inclined to sympathize with the plight of the Palestinians, but unable to see their way clear to act in solidarity with them, as they might for others?

These are pressing and difficult problems, yet increasingly, and especially on college campuses, and in academic organizations, people are willing to discuss and debate things like divestment, as well as academic and cultural boycotts that refuse to endorse the status quo. Indeed, earlier this month a group of 600 artists that included Ken Loach, Brian Eno, Khalid Abdalla and Haim Bresheeth announced they were endorsing a cultural boycott of Israel.

At a recent event at Stanford, where I am a professor of comparative literature, Cornel West paused in the midst of a speech to praise the student organizers who had put forward a bill to ask the Stanford trustees to divest; the bill had failed by only one vote. (And, on February 18, there would be a revote, in which the bill was passed, 10-4-1.) West made a point of insisting that raising the Palestinian flag should not be seen as an act of narrow nationalism, but rather as an act of solidarity with an oppressed people, and as part of the effort to grant them their right to self determination.

Afterwards, I spoke about how the issue of Israel-Palestine was registering not only with young people, but also with older progressives and intellectuals, and about the linkages between civil rights struggles in the US and abroad.

First of all, let me ask you: Why do you endorse the Boycott, Divestment, and Sanctions movement? In what ways do the movement and its goals resonate with your longstanding activism, your values and principles?

Well I always proceed based on moral criteria and spiritual standards that have to do with keeping track of the humanity of persons. And there is no doubt in my mind that the Israeli occupation is ugly, it’s vicious, it’s brutal, and it needs to not just be brought to attention, it needs to be brought to an end. It’s also true that I am against the occupation of the Tibetan people and the occupation of Kashmir and others, but this particular occupation is one that deserves our attention precisely because as an American citizen my tax money is being used to perpetuate that ugly occupation.

Let me draw out a possible link between your anti-racist activism and your support of the Palestinian people. After Ferguson, a lot of people drew the parallel to Gaza. But as soon as they did, many others chimed in and said, “No, those cases are not at all the same and you can’t make that comparison.” And in fact when Angela Davis was invited to give the Martin Luther King, Jr. convocation for the city of Santa Cruz, Calif., recently, she got a lot of criticism for drawing out the parallels. What are your thoughts on that, how do you see making a legitimate case for the connection between Ferguson and Gaza?

Well first, in terms of the various kinds of Zionist critiques, we make it clear that this has absolutely nothing whatsoever to do with anti-Jewish hatred or anti-Jewish prejudice. This has to do with a moral and spiritual and political critique of occupation. Secondly, there is no doubt that Gaza is not just a “kind of” concentration camp, it is the hood on steroids. Now in the black community, located within the American empire, you do have forms of domination and subordination, forms of police surveillance and so forth, so that we are not making claims of identity, we are making claims of forms of domination that must be connected. And those are not the only two — we could talk about the Dalit people in India and the ways that their humanity is being lost and there are parallels there; we could talk about peasants in Mexico. So all of these are going to have similarities and dissimilarities. But there is no doubt that for the Ferguson moment in America and the anti-occupation moment in the Israel-Palestinian struggle there is a very important connection to make and I think we should continue to make it.

Well at one of our events today you called me a literary critic, but you’re a literary critic too—I’ve read some of your essays–so I want to ask you a question: How do we change the narrative around Israel-Palestine? How does that story change when one version is so ingrained in the American psyche — and it’s a particular narrative of the founding of the state of Israel as a Jewish state, and one that continues to justify the occupation and the colonial settler project of the state of Israel?

Well I am not the sophisticated literary critic you are, but I can say this: You can just look at the history of the divestment movement here at Stanford. You told me that two years ago when the student government voted on a divestment resolution, the vote was one “Yes,” seven “No,” and five abstentions. And just a few days ago when a similar divestment bill was presented, the vote was nine “Yes,” five “No,” and one abstention. The narrative is being changed and it’s only by means of voices — new stories and analysis, and bodies on the line, not just here but also across national boundaries — to shift the court of world opinion. And that’s precisely what is taking place. And of course at the center of it is the unbelievable courage of the Palestinian brothers and sisters against just overwhelming odds.

One last question: When you hear some people say, in the face of protest, agitation, critique, and civil disobedience, “we have to have peace, we need to obey the law,” like Obama did after the Ferguson verdict—you often have to think that it is precisely those whom the status quo serves, and in fact those who have the power to maintain the status quo in their favor, who are saying that we need to maintain peace (as they see it) at all cost. How do you move people out of their sense of privilege and entitlement?

Well first I think we have to be very clear that the call for the end of the vicious Israeli occupation is today a kind of litmus test for progressives, because you have sacrifice so much. There is no doubt that you will be called an anti-semite, that you will be called a chauvinist; there is no doubt you will be called someone who is downplaying the history of oppression of Jews. For so long, we have allowed not just the conservatives, not just the neo-liberals, but even progressive intellectuals to be silent when it comes to Palestinian peoples. So we have to call into question our own academic colleagues, we have to call into question our own fellow intellectuals.

And as a black intellectual it means I have to make the connection between the Obama apologists — who, as intellectuals, hide and conceal, not the silence, but the promotion of the military might that facilitates the killing of 500 Palestinian babies — with not one mumbling word being said by a President as the apologist intellectuals themselves don’t say a mumbling word. That needs to be shattered, that needs to be called into question. One can no longer say one is a serious progressive, let alone committed to moral integrity, without lifting one’s voice to call for an end to the Occupation of the Palestinian people. We have got to make that more and more a central part of our action.

David Palumbo-Liu is the Louise Hewlett Nixon Professor at Stanford University. Follow him on Twitter at @palumboliu.