food Word by Word: A Linguist Reads the Menu

Stanford linguistics professor and MacArthur Fellow Dan Jurafsky links the origins and evolution of foods to history, culture, tradition and trends. Wide-ranging topics include sexual metaphors in restaurant reviews, relationship of price to the number of syllables in menu descriptions, and the language on potato chip bags...among other things. 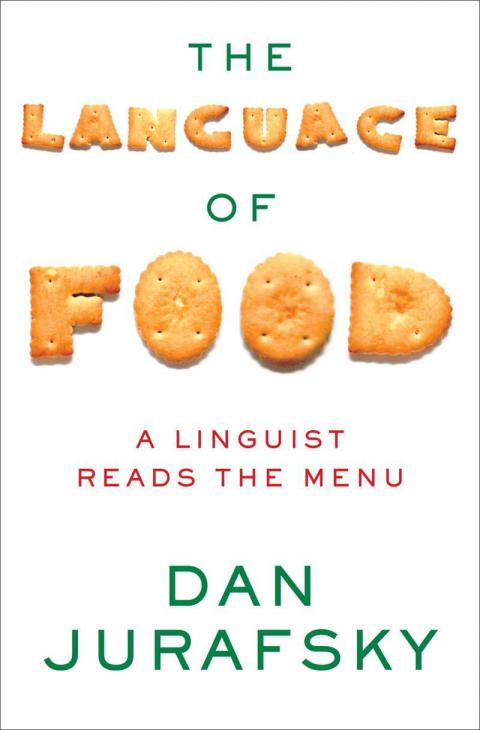 In “The Language of Food,’’ Dan Jurafsky’s fun, fascinating, and absorbing linguistic analysis of our food culture and its origins, the Stanford professor of linguistics and computer science cites an episode of the cult television comedy “Portlandia’’ in which “obsessive locavores” Fred Armisen and Carrie Brownstein grill their waitress about the chicken they’ve ordered. Skeptical that the chicken’s diet of hazelnuts are locally grown, they decide to journey to the chicken farm to see for themselves. It’s ridiculous and, yet, these days such obsessiveness can cut pretty close to the bone.

Though Jurafsky uses the “Portlandia’’ episode in his first chapter to help describe the contemporary evolution of menu language, the skit also serves to illustrate one of the book’s central themes. We inhabit a mad age where it will not do to simply be a dedicated foodie, where it is imperative to one’s social standing among other foodies to — at the very least — have a raw dairy supplier who is on the lam from the FDA.

Still there is scant attention paid to the words that describe that with which we have become so single-minded and obsessive. As Jurafsky intriguingly ponders in his introduction: “Why is the turkey, a bird native to Mexico named for a Muslim democracy. . . . Why do we give toasts at weddings. . . . Why were flour and flower once the same word and what does that suggest about our unhealthy obsession with refined food?”

Based on the lectures he gives to his freshman linguistics class, Jurafsky often begins chapters locally in his hometown of San Francisco, as if he were musing on a restaurant’s menu, bacon-flavored ice cream, the origin of toasts, the history of macaroni. The polymath’s considerable imagination and curiosity then leads him on a wide-ranging investigation.

In the chapter, “Ketchup, Cocktails, and Pirates,’’ Jurafsky shows how the word ketchup originally meant fish sauce in Fujian and that the origins of the world’s favorite condiment goes back thousands of years to the ancient Khmer. It was adopted by 17th-century Western sailors in the Far East attempting to enliven their drab fare and made its way back to England, where walnuts were substituted for fish paste until tomatoes were used in the 19th century. Jurafsky goes on in this chapter to point out that the origin of ketchup is significant because it symbolizes the globalization of trade. In the 17th century, China was the richest country in the world, and Europe was desperate to get a piece of the action. Ketchup, oddly enough, became one of the most significant treasures with which Europeans returned.

While the “Language of Food’’ sounds like required reading for the food-obsessed, it is also for any readers who have thought twice about what goes in their mouths. In the chapter, “How to Read a Menu,’’ I was fascinated by the author’s research into “linguistic fillers,” that is, words used by restaurants to tempt diners toward what in reality may be quite mediocre dishes. “These words seem to promise something special . . . but in a subjective enough way that the restaurant sneakily avoids incurring any actual obligation. . . . For each positive vague word like delicious, tasty or terrific . . . the average price of the dish is nine percent less.”

While many, if not all, of the chapters in “The Language of Food’’ find their roots in college lecture halls, the book is virtually free of dry or stuffy academia. You get the sense that Jurafsky is a pretty fun, idiosyncratic guy who adores his Chinese biologist wife and her culture, is completely immersed in the considerable food culture of San Francisco, knows a ton about a lot of pretty diverse and arcane knowledge and is absolutely unafraid of digressing to uncover interesting bits of truth about food.

While many of the chapters find their roots in college lecture halls, the book is virtually free of dry or stuffy academia.

You don’t have to be a foodie to find “The Language of Food’’ a high enjoyable and compelling read — but you might be a convert by the time you finish.