Alexis Tspiras, the Greek prime mininster, says Berlin has ‘a moral obligation’ to make amends for years of Nazi occupation 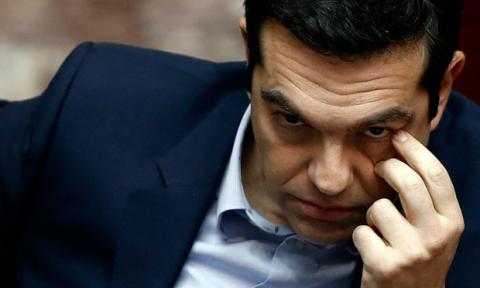 Alexis Tsipras during a parliamentary session for the creation of a committee for claiming war reparations., Alkis Konstantinidis/Reuters
Greece’s strained relations with Germany took a turn for the worse on Wednesday when Athens’ leftist-led government raised the spectre of seizing German assets for war reparations that it claimed Berlin has stubbornly refused to honour.
In an address before the Greek parliament, Alexis Tspiras, the Greek prime minister, said Germany had “a moral obligation” to make amends for the atrocities wrought during three devastating years of Nazi occupation. Berlin, he said, had deliberately flouted its duty employing “legal tricks and delay”.
“Germany has never properly paid reparations for the damage done to Greece by the Nazi occupation,” the premier told the house as deputies debated establishing a committee to seek war reparations, repayment of a forced loan and the return of plundered antiquities.
“After the reunification of Germany in 1990, the legal and political conditions were created for this issue to be solved. But, since then, German governments chose silence, legal tricks and delay.”
The litany of crimes carried out by Nazi troops – including widespread reprisal executions, pillaging and the massacres of entire villages – were still “vivid”, he said. As such, Europe’s paymaster had a “moral obligation to remember what the (German) forces did to the country”. And his new government, elevated to power on 25 January, had a debt of duty to those who fought Nazism and to those who died at its hands.
The issue of war reparations has long dogged Greek-German ties but Athens’ decision to again bring the matter to centre stage comes at a particularly sensitive time. Negotiations to keep the debt-stricken nation afloat are at a critical stage with Greece’s ability to stay solvent, and in the eurozone, almost entirely dependent on Berlin – the provider of the vast bulk of its €240bn bailout programme.
But Tsipras, whose radical left Syriza party campaigned on an anti-bailout platform with the leader saying repeatedly that his overarching aim was to dismantle “Merkelism”, was not alone in lobbing rhetorical bombshells on Wednesday.
In a speech before MPs, Nikos Paraskevopoulos, the justice minister, went so far as to say that Greek authorities might seize local German properties in a bid to compensate Nazi victims not least the families of those slaughtered in the village of Distomo near Delphi, in 1944. In reprisal for an ambush on German troops outside the village, 218 Greeks, including women and children, were rounded up and slaughtered by a Waffen SS unit. The massacre would be remembered as one of the most heinous atrocities of the second world war.
“I believe the order should be given,” said the minister, adding that Greece’s supreme court had ruled in favour of state authorities seizing assets to compensate survivors 15 years ago. The court decision was never acted upon. “I’m ready to give it, notwithstanding any obstacles,” Paraskevopoulos railed.
German assets range from diplomatic properties and cars to the Goethe institute, which is among Athens’ leading cultural centres.
Berlin’s response was tart and to the point. Germany had honoured its war obligations and would not be revisiting the controversy, chancellor Angela Merkel’s spokesman said.
“It is our firm belief that questions of reparations and compensation have been legally and politically resolved,’’ said spokesman Steffen Seibert. “We should concentrate on current issues and, hopefully what will be a good future.”
While Germany handed over 115m Deutschmark to Greece in 1960, Athens contends that it is still owed about €160bn and that the money received was only an initial payment.
The row is not likely to warm MPs in Merkel’s conservative ranks who are already wavering over extending Greece’s rescue programme and enraged at the prospect of having to fund a third bailout for the crisis-stricken nation later this year.
Anti-Greek sentiment is said to be growing by the day among German lawmakers. But anti-German feeling in Greece also appeared to have climbed as senior members of the Tsipras government railed against Berlin’s hegemony of Europe.
“Germany’s Europe has finished, [the Europe] where Germany forbids and all the other countries execute orders is over,” fumed Dimitris Statoulis, the minister in charge of social security. “In November, when [Spain’s anti-austerity party] Podemos is elected things will be even worse for them,” he said.
Nazi occupation of Greece was among the most brutal on the continent. More than 300,000 starved to death as a result of famine, some 130,000 were executed in reprisals, while the country’s ancient Jewish community perished, almost in its entirety, in gas chambers.