Following Israeli Prime Minister Benjamin Netanyahu’s speech to Congress last week the tension between the Republican-dominated Congress and President Barack Obama has reached a near constitutional crisis. While this crisis may subside, the more lasting impact of these developments may well be a change in relationship between the Israeli government, the Republican Party, and the traditionally bipartisan U.S. consensus towards Israel and wider Middle Eastern issues. 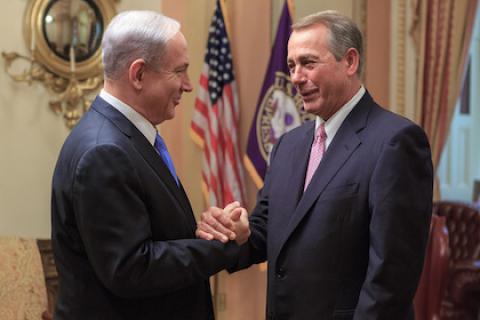 The contentious diplomatic drama of Israeli Prime Minister Benjamin Netanyahu’s speech before the U.S. Congress last week has now expanded into political farce, after 47 Republican senators sent a letter to the Iranian supreme leader this week.

The letter basically insulted the Iranians by suggesting that they did not know how the American political system operates, because, they argued, the next administration could reverse any agreement President Barack Obama reaches with Tehran.

The tension between the Republican-dominated Congress and Obama is nearly a constitutional crisis over the president’s prerogative to conduct foreign policy. It is also quite unusual to see a sitting Congress actively trying to thwart a foreign policy objective that the president is actively pursuing in close coordination with five other world powers.

Those issues will blow over in time, but the more lasting impact of these developments might well be the evolving relationship between the Israeli government, the Republican Party in the United States and the traditional bipartisan position in the U.S. to policy toward Israel and wider Middle Eastern issues. Both the right-wing Netanyahu-led coalition government and the Republican Party in Congress have reasons of their own to challenge President Barack Obama, and they have chosen the nuclear agreement being negotiated with Iran as the issue on which to confront him in a very hard and very public way.

The unprecedented manner in which both Netanyahu and the Republicans have openly tried to shape American foreign policy on the basis of Israeli demands has shocked seasoned political analysts I have spoken to during my visit in the U.S. this week. Some noted that the episode has crossed the line that demarcates routine ideological contestation from the charge that American elected officials are choosing to back a foreign government over their American president. Some even wondered if this represented treason by members of Congress who advocated the Israeli position. Others spoke of a congressional gimmick, while yet others accused Republicans of risking war with Iran to score political points at home.

The fact that most of Netanyahu’s warnings about what would happen if a nuclear agreement were reached with Iran were factually wrong or highly exaggerated was not the real issue here. Rather, it was that American elected officials who were sworn to uphold the Constitution of the United States chose to act in a manner that made them look as if they represented the wishes of a foreign government.

The fact that the foreign government was that of Israel also could put Jewish Americans in the uncomfortable position where they might be accused of having dual loyalties – or worse yet, of supporting Israeli policy over American policy.

I am not surprised that Netanyahu has resorted to hysterical exaggerations, because he understands that an agreement on Iran’s nuclear capabilities would be an enormous game changer in the region, which would confront Israel with major new challenges. An agreement would certainly open the way to more normal Iranian relations with the United States and other Western powers, and would probably force a reconfiguration of Iranian-Arab ties which are now strained.

An unsanctioned and thriving Iran would be an attractive partner for any country, and a stronger Iran that is not a nuclear threat would force a new balance of power in the Middle East among Iran, Turkey, Israel, Saudi Arabia and perhaps Egypt. Israel would probably be unhappy with such a situation that saw a handful of strong countries create a balance power that did not allow any one of them to impose its will on the entire region. Israel today feels it can do anything it wants to do anywhere in the Middle East, with total impunity.

That would change if a new regional balance of power arrangement were to take shape. So Netanyahu is using any available tactic to prevent an agreement that limits Iran’s nuclear capabilities, including going so far as to shatter the traditional rules governing U.S.-Israeli ties. Those rules determined that both parties in the American political system would fully support Israel in virtually every arena, but Israel would not interfere in domestic American politics.

Well, Netanyahu just tore up that rulebook, and nobody is quite sure of what will happen next. We are entering into uncharted territory as senior American officials and some members of Congress openly criticize the Israeli prime minister for brazenly trying to change American foreign policy by manipulating Congress against the American president. Most of the damage done to the U.S.-Israel relationship will probably be patched up, but some of it may remain. We will find out more about this in the American elections next year.

[Rami G. Khouri is published twice weekly by The Daily Star. He can be followed on Twitter @RamiKhouri.]