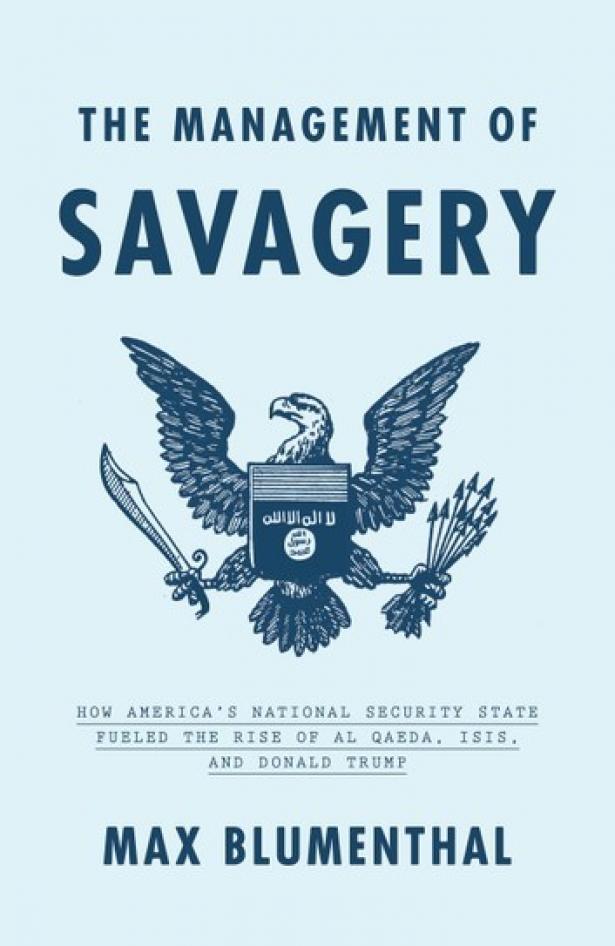 “AQ [al-Qaida] is on our side in Syria,” US Secretary of State Hillary Clinton was advised in a February 2012 email from her deputy chief of staff. Journalist Max Blumenthal opens his latest book, The Management of Savagery, with this telling epigraph.

The statement to Clinton reveals the kinship between US military interventionist policy in the Middle East and the rise of radical Islamist forces like al-Qaida and Islamic State. It also captures one of the essential themes of this startling study that spans decades of events in Afghanistan, Iraq, Libya and Syria.

Blumenthal’s principal thesis is that the election of President Donald Trump and the rise of Islamophobic white nationalism in both Europe and the United States are a direct result of US intervention in Afghanistan from 1979 to 1989 through arming the mujahideen and, following the 11 September 2001 terrorist attack on the World Trade Center, the subsequent invasions of both Afghanistan and Iraq.

The book’s title is taken from a 2004 strategy paper entitled “The Management of Savagery,” written by a jihadist ideologue with a nihilistic, violent worldview under the pseudonym Abu Bakr Naji. Naji advised in the paper that the path to creating an Islamic state in the region lay in exploiting the chaos caused by US regime change wars. In that chaos, jihadists could establish “administrations of savagery” in outlying regions and use those outposts to attack state institutions.

“Naji’s paper dovetailed neatly,” Blumenthal writes, “with the regime-change blueprints conceived by national security hardliners in Washington, and hints at the symbiotic relationship” between the hardliners and the jihadists. Blumenthal argues this symbiosis went beyond ideology and “was consolidated through direct collaboration,” particularly in Libya and Syria where US and other external forces provided weapons and air cover to jihadist forces.

The author lays the groundwork for this thesis in a chapter titled “At the Dawn of the Forever War.” He quotes from the memoirs of former US General Wesley Clark, who recounts a 1991 meeting with neoconservative Pentagon strategist Paul Wolfowitz.

Wolfowitz reportedly told Clark, “With the end of the Cold War, we can now use our military with impunity. The Soviets won’t come in to block us. And we’ve got five, maybe 10 years to clean up these old Soviet surrogate regimes like Iraq and Syria before the next superpower emerges to challenge us.”

Thus began the “forever war,” still active today, as US troops and military aid continue to play a role in Afghanistan, Iraq, Syria, Yemen and Somalia.

Blumenthal’s brief does not just encompass the neoconservative strategists of the Republican Party. He also tackles the so-called “military humanism” or liberal interventionism of the Democratic Party, particularly the policies of Barack Obama’s administration that turned Libya into a failed state marked by rival governments and extremist factions, a situation characterized by Obama in 2016 as “the worst mistake” of his presidency. Similar interventions in Syria only exacerbated the civil war there.

If the far-right elements of the national security state, such as the group of neoconservatives around President George W. Bush, had a plan for regime change in the Middle East, so did the so-called military humanist ideologues.

New York Times columnist Thomas Friedman exemplified this approach, according to Blumenthal, when he advised the Trump administration to forgo attacking Islamic State in Syria. Friedman recommended allowing the group to be a “headache” for Syrian President Bashar al-Assad and his Iranian, Russian and Hizballah allies – “the same way we encouraged the mujahideen fighters to bleed Russia in Afghanistan” in the 1980s. In taking this stance, Friedman consciously echoed US national security adviser Zbigniew Brzezinski, who advocated making Afghanistan the Soviet Union’s Vietnam.

Friedman’s advice also dovetails with views from Israel’s national security establishment. Strategist Efraim Inbar, in a paper titled “The Destruction of Islamic State Is a Strategic Mistake,” argues that the group was a “useful tool” against Iranian influence in Syria. Moshe Yaalon, Israel’s defense minister in early 2016, repeated the same view when he said, “In Syria, if the choice is between Iran and the Islamic State, I choose the Islamic State.”

The consequences of this realpolitik approach by world and regional powers on different sides of the conflict, of course, were massive human suffering, bombings of civilian populations, acts of collective punishment, torture, kidnappings and imprisonment, and a refugee and humanitarian crisis of unprecedented proportions.

Enemy of the oligarchs

Other publications have explored these consequences, such as Patrick Cockburn’s Chaos & Caliphate: Jihadis and the West in the Struggle for the Middle East. What makes The Management of Savagery different is its examination of the blowback on domestic politics in Europe and the United States, particularly the rise of Trump’s America Firstism and the Islamophobic white nationalist movements on both continents.

Blumenthal grapples in particular with the way these right-wing forces embraced Israel and the ideology of Zionism “to paper over their unsavory anti-Semitic roots” while promoting an anti-immigrant, anti-Islam populism unable to disguise its white supremacist character. At least one such party in Finland – the Finns – even tried to tap into the fear of white women being raped.

The Management of Savagery is Blumenthal’s fourth book. His first, Republican Gomorrah: Inside the Movement that Shattered the Party (2009), was critically acclaimed and became a New York Times best seller. His second, Goliath: Life and Loathing in Greater Israel (2013), was largely ignored by the mainstream media, although it won a Lannan Foundation Cultural Freedom Notable Book Award in 2014.

A similar fate of mainstream silence probably awaits The Management of Savagery, particularly because it exposes corporate media’s shoddy, biased reporting on Syria’s civil war. This coverage largely fails to reveal the existence of significant popular support for the Assad government, especially among Christian and Alawite minorities but also including Sunnis within the Syrian military. Blumenthal cites a study by Max Abrahms, a Northeastern University political scientist, based on in-depth interviews with Syrian refugees showing that most fled their country out of fear of both sides in the civil war.

Nor has the mainstream media fully accounted for the cooperation between the so-called moderate, pro-US rebels and the extremists of al-Qaida and Islamic State, although a New York Times dispatch in October 2012 acknowledged that most of the arms shipped to these rebels actually ended up with hard-line jihadists.

If mainstream reviews do appear, the author will probably be criticized for this exposé. The Syrian American Council, a pro-US intervention group, pressured an East Coast bookstore to postpone a scheduled reading and reschedule it off-site.

Contradicting the claims of his detractors, Blumenthal actually provides a relatively balanced account of the civil war.

He shows how Syria’s Arab Spring encountered a corrupt and repressive Assad government that implemented neoliberal privatization measures and neglected agrarian reform policies while simultaneously failing to respond to a drought that heavily impacted rural areas where religious conservatism thrived. The popular uprising, Blumenthal writes, gave way to “a brutal civil war fueled by cynical outside powers and carried out along sectarian lines.”

From the standpoint of the national security establishment, Blumenthal is already a choice target for abuse due in part to his reporting on Gaza in The 51 Day War: Ruin and Resistance in Gaza (2015), his third book, and his advocacy for Palestinian rights. President Donald Trump and the warmongers in his administration, such as national security adviser John Bolton, might even designate this journalist “an enemy of the people.” In fact, Blumenthal earns the sobriquet “enemy of the oligarchs.”

Rod Such is a former editor for World Book and Encarta encyclopedias. He lives in Portland, Oregon, and is active with the Occupation-Free Portland campaign.