"India’s Daughter", Leslee Udwin's stirring documentation of the brutal rape and murder of Jyoti Singh, has been banned by the Indian government claiming the film is an international conspiracy to defame India and incites violence against women. The efforts to suppress the film are backfiring, creating what is being called an 'Arab spring for gender equality in India'. 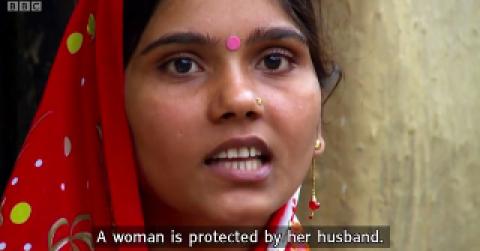 Puneeta Devi, the wife of Akshay Thakur, one of the rapists whose crime is at the center of “India’s Daughter.”,BBC

The documentary “India’s Daughter,” by the British filmmaker Leslee Udwin, recounts the infamous and brutal rape and murder of a young woman on a bus in Delhi in 2012, an incident that sparked protests and spurred a national conversation about women’s rights and safety. The film was scheduled to be broadcast on the Indian network NDTV this weekend, but a last-minute intervention by the Indian government banned its release.*

The details of the crime are already well known in India. A twenty-three-year-old medical student named Jyoti Singh was walking home from a movie with a male friend at 8:30 P.M. A group of men who had been out drinking picked them up in a privately owned bus, and asked them what they were doing out so late. The men beat Jyoti’s friend and took Jyoti to the back of the bus to rape her. The details of the attack, from which Jyoti was left beaten, bitten, and disembowelled, are truly gruesome. She was somehow still alive when the men left her and her friend on the side of the road, but she died of her injuries several days later.

At the center of Udwin’s film is a series of interviews with the man who was driving the bus that night, Mukesh Singh. He is one of four men currently on death row for the crime. (A fifth man was sentenced to death but committed suicide in prison; a sixth, who is underage, is serving a three-year sentence.) His clear-eyed, unaffected demeanor as he recalls that night, as well as the ease with which he justifies what happened, adds another dimension to Jyoti’s story. “A decent girl won’t roam around at nine o’clock at night,” he says. “A girl is far more responsible for rape than a boy.” Her death, he says, wouldn’t have happened if she hadn’t fought back. He doesn’t seem repentant, but he doesn’t seem to be burning with misogynistic rage either. (It might be easier to process his statements if he were.) If anything, he seems annoyed—unable to understand why this particular rape has caused so much consternation.

The mens’ defense lawyers, whom Udwin also interviews, are perhaps more offensive than their client, belying the idea that education, in a general sense, instills respect for women. One speaks matter-of-factly about his client dragging out the victim’s entrails, as though it were a normal response of someone in an agitated state. Another of the lawyers says that if a daughter “disgraced herself,” he’d douse her with petrol and set her on fire himself.

After clips of the Mukesh Singh interview began circulating online, the Indian government stopped the scheduled Indian broadcast of “India’s Daughter,” which was set for March 8th, International Women’s Day. On March 4th, a statement from the Indian Home Minister’s office said that the government was enforcing a ban because Udwin hadn’t secured the correct permissions to interview Singh in prison, didn’t abide by agreements to show authorities unedited versions of the interview, and because Singh’s statements are “an affront to the dignity of women.” (Udwin has since published copies of the letters of permission she received.) In another statement, the government warned that clips from the film “appear to encourage and incite violence against women.” Some supporters of the ban say that airing the Singh interview is tantamount to giving a platform to the rapist’s views; others say that the documentary paints sexual violence as an Indian issue rather than a global one, and fear that it will perpetuate a “white-savior” attitude in foreign viewers. That the government finds the film nationally embarrassing is a likely reason for the ban—members of the ruling B.J.P party have stated that the film is part of “an international conspiracy to defame India” and have protested that its release will affect tourism.

Other countries were set to show the film on Sunday, too. The Indian government also demanded that the film be pulled internationally, but the BBC instead moved the U.K. broadcast up to Wednesday night. In an open letter, the director of BBC Television, Danny Cohen, wrote, “The purpose of including the interview with the perpetrator was to gain an insight into the mind-set of a rapist with a view to understanding the wider problem of rape and not just in India.” Three hundred thousand people watched the U.K. broadcast. India’s Home Minister has threatened action against the BBC for airing the documentary.

India’s efforts to suppress the film have backfired, triggering widespread coverage and a proliferation of unauthorized copies on YouTube. (The film’s production company took down its official posting, per the Indian government’s ban, and YouTube has removed the unauthorized copies, but a few are still online.) In an interview with India’s NDTV, the victim’s father, Badri Singh, said that he thinks everybody should see the film. For a long time, his daughter’s name was not made public; she was known instead as Nirbhaya, which means “the fearless one.” But in the documentary, Badri says that he and his wife want their daughter’s name to be known, and that “she’s become a symbol.”

Jyoti Singh clearly has become a symbol of the increasingly visible and vocal movement to fight violence against women in India. But “India’s Daughter” demonstrates that Jyoti’s story is emblematic of other forces that are converging, often explosively, in the rapidly changing country. The dehumanization of women is the primary backdrop for the film, but problematic notions of femininity go hand-in-hand with problematic notions of masculinity: what’s a boy to think, one activist in the film asks, when he’s always given more milk than his sister because the whole family believes that his energy and strength are more important? Poverty, of course, also plays a role: Jyoti’s perpetrators all grew up amid grinding deprivation. The youngest’s mother, an agricultural laborer, is interviewed in her home. “The dishes haven’t been washed,” she says. “No point. There’s nothing to eat.” She describes how her son left at the age of eleven to provide for the family. “How could we know that the gangsters of Delhi would get him and take him away from us?” Sandeep Govil, a psychiatrist at the prison where the men are being held, summarizes their mindset: “It’s our right. We are just in enjoyment mode, and everybody has a right to enjoyment. Big people, you know, somebody who has money, do it by payment. We have the courage, so we do it by our courage.” Even before her death, Jyoti’s life was a symbol of positive changes for women in India. Her parents, in an inversion of traditional values, used the money saved for her wedding, and even sold their ancestral land, in order to pay for her education.

My mother is Indian, and I was in the country with her recently to visit my grandparents. (My mother and her sister are the eldest of four children. As my grandmother tells it, my grandfather barely acknowledged the first two births, but celebrated the arrival of the third child, a son, with a gift of four gold bangles.) My grandfather watches a lot of TV news. For several days while I was visiting, the story receiving round-the-clock coverage was a gang rape in the state of Haryana in which eight men attacked a twenty-eight-year-old woman who suffered from mental illness. Her body was found in a field several days after she disappeared; she had stones and sticks inside her. Around the same time, an eight-year-old girl was raped and killed in the middle of the afternoon, and a Japanese tourist was attacked by a man posing as a tour guide. The Nirbhaya murder was always a reference point in the reports.

My grandmother, who is eighty-seven, doesn’t think much of modern life. She doesn’t like the busyness or the cell phones or all the travel, and she’s sure that morals have lapsed. But she’s not especially enamored of the old days either, which she describes as full of hardship, especially if you were female and at the mercy of the men around you. She nods knowingly when rape stories come on the TV. “You see what goes on?” she says. It’s hard to tell which is worse to her: the way things were or the way things are going. But she’s clear about who bears the brunt of the ills she sees in the world, whether as targeted victims or collateral damage. Her refrain is, “It’s always the women and children who suffer.”

Perhaps the most striking interview in “India’s Daughter” is with the wife of one of the murderers. She wears a sari and sits on a doorstep with her young son, who looks to be three or four years old. While all the other interviewed family members, whether of the victim or of the perpetrators, seem sad, diminished, and broken, she flares with anger. “Am I not a daughter of this country?” she says. “Don’t I have a right to live? Will there be no more rapes in Delhi? Will you hang all rapists? A woman is protected by her husband. If he’s dead, who will protect her and for whom will she live? I also don’t want to live. Priyanshu, my son, is a child. He understands nothing. I will strangle him to death. What else can I do?”

To learn more about future screenings of "India's Daughter" and the campaign to get the film out in India and communities around the world -- sparking discussion, advocacy and understanding, go to Vital Voices website

[Andrea Denhoed is a Web producer at newyorker.com.]