Edward E. Baptist’s The Half Has Never Been Told: Slavery and the Making of American Capitalism details how financial speculation is baked into the American economy. Baptist explains 185 years ago, acquisition of slaves, like other "property", could be financed by mortgages; that bonds were sold to investors based on the value of those mortgages; and, securities based on enslaved human beings produced a “slave asset bubble” not unlike the 2008 financial crisis. 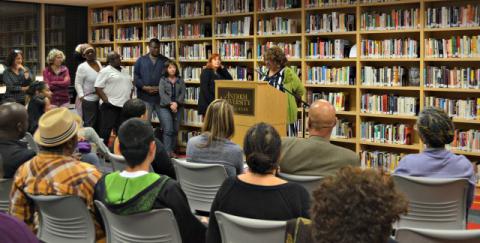 Antioch community reading of “The Case for Reparations”,

The biggest “aha” for me after reading Edward E. Baptist’s The Half Has Never Been Told: Slavery and the Making of American Capitalism is the extent to which financial speculation is baked into the American economy. From Baptist I learned that 185 years ago, the acquisition of slaves, like any other property, could be financed by mortgages; that bonds were  sold to investors based on the value of those mortgages; and, that securities based on enslaved human beings produced a “slave asset bubble” not unlike that produced by the rampant speculation in home mortgage derivatives that helped cause the financial crisis of 2008.

Baptist details how that system was built in a Chicago Sun-Times article last year:

In the 1830s, powerful Southern slave owners wanted to import capital into their states so that they could buy more slaves. They came up with a new, two-part idea: mortgaging slaves; and then turning the mortgages into bonds that could be marketed all over the world.

First, American planters organized new banks, usually in new states like Mississippi and Louisiana. Drawing up new lists of slaves for collateral, the planters then mortgaged them to the banks they had created, enabling themselves to buy additional slaves to expand cotton production. To provide capital for those loans, the banks sold bonds to investors from around the globe –– London, New York, Amsterdam, Paris. The bond buyers, many of whom lived in countries where slavery was illegal, didn’t own individual slaves –– just bonds backed by their value…

As slave-backed mortgages became paper bonds, everybody profited –– except, obviously, enslaved African Americans whose forced labor repaid owners’ mortgages. But investors owned a piece of slave-earned income. Older slave states such as Maryland and Virginia sold slaves to the new cotton states, at securitization-inflated prices, resulting in a slave asset bubble. Cotton factor firms like the now-defunct Lehman Brothers –– founded in Alabama –– became wildly successful. Lehman moved to Wall Street, and for all these firms, every transaction in slave-earned money flowing in and out of the U.S. earned Wall Street firms a fee.

A few years ago, some of those same Wall Street institutions, after speculating on a sub-prime loan market that was disproportionately and unfairly populated by African-American borrowers, produced a crisis that led to a 60% loss of Black household wealth –– perhaps the largest loss of Black wealth since Black people were themselves wealth, owned by others.

It is in this way that Baptist understands that “For the past 200 years, the success of American finance has been built on the impoverishment of African-American families.”

In his elegant Atlantic magazine article, "The Case for Reparations", Ta-Nehisi Coates works backwards from recent experiences in Chicago to the history that Baptist describes. I cannot recommend this article highly enough, because, as Coates and many others are deeply aware, it is impossible to make a case for reparations without bearing witness to our own shared history. It is impossible to address inequality without recognizing and reconciling the injuries that history has produced.

Last month, Lisa Lepore, the librarian at Antioch University where I teach, used Coates’ article to create an opportunity for our campus community to bear such witness. It was a simply constructed event. Lisa created an abridged version of “The Case for Reparations” article, printed it out, and placed it in a notebook. She then invited audience members to take turns reading a page from the notebook with the instructions, “Read the page, turn the page, and then you’re done.” We took turns reading the pages to the end.

The result was a shared experience of history. In the discussion that followed, different generations of African-Americans framed their own families’ migration story in the context of the article. People from other countries and cultures expressed wide-eyed appreciation for a new understanding of the place we call the United States. It was one of the simplest and most effective learning spaces of my rather long university career.

Let me know if you would like to replicate the event in your own library, or community, or organization. I would be happy to share how that might be done.

Dr. Pop is a popular education website that helps people become better story-tellers and strategic thinkers.  We do this by telling stories ourselves, explaining complicated things in simple ways, and showing how and why we did it.  Along the way we focus on how the economy, urban planning, and democracy work; provide living examples of how they can work better; and offer tools for organizers, educators, students, activists, and all manner of curious people who are interested in change.   info@drpop.org