“Taxi” is Iranian director Jafar Panahi’s third film since he was arrested in 2010 and charged with making anti-government propaganda. He was barred from making films for 20 years, from leaving the country and from speaking to the foreign media. He got around some of these restrictions this time by filming inside a taxi driving through the streets of Tehran, producing a beautifully humane fable. "Taxi" took the top prize at the Berlin Film Festival. 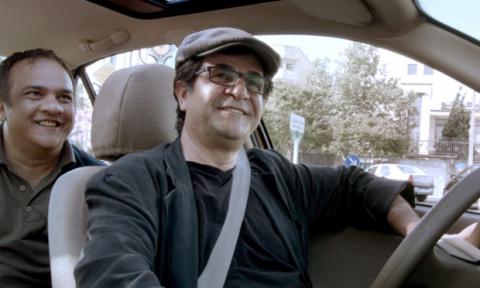 The Iranian auteur and democracy campaigner Jafar Panahi has once again found a way around the state ban on him as a film-maker with a new movie at a European festival. This new film is technically without credits and so evidently cannot be officially attributed to him as a director – although it is obvious enough, and perhaps the government realises that enforcing the ban would make them look absurd, especially in the light of Iran’s new detente with the west.

Taxi is a good-humoured jeu d’esprit, a piece of freewheeling cinephile activism, and a kind of career selfie – Panahi is certainly not burdened with any false modesty. It’s a rueful but insistent statement to the effect that he is down but not out. He is still here, still commenting on Iran’s heavy-handed system of injustice, still shooting movies, on digital cameras, on mobile phones, on anything with a memory stick. There are allusions to his own earlier films, like Crimson Gold and Offside.

The premise, or joke, is that Jafar Panahi is now reduced to driving a cab. The great director is now at the wheel of a very modest car (it embarrasses his niece when he picks her up from school) driving around Tehran, and actors, non-professionals and friends of Panahi improvise roles as passengers, hopping in, often sharing a ride, sometimes just needed to go a couple of blocks; oddly, they rarely specify an address. And Panahi is a hopeless cabbie, often not knowing where places are, though his garrulous customers seem not to care too much, because he often lets them off the fare. He films his passengers from a locked-off camera position on the dashboard and the conceit is that this is the security video camera to prevent him from getting robbed; later we will see exactly how effective that is. And this gallery of people give us a moving snapshot of modern Iran, and how everyone is feeling about crime and punishment and the way they live now.

In some ways, Taxi is in a classic subgenre of Iranian cinema virtually invented by Abbas Kiarostami: the scene, or entire film, shot inside a car, in movies like Ten (2002) or Taste Of Cherry (1997). The interior of car is both inside and outside, both private yet out in public, both stationary yet moving. It allows a kind of fleeting candour, even intimacy between strangers.

The characters who demand a ride are partly comic: one lady is actually carrying a goldfish in an open bowl. A sobbing woman asks him to carry her bruised and bleeding husband (injured in a road accident) to hospital, and this poor man insists that Panahi’s other passenger films him in his mobile phone reciting his will, leaving all his money to his wife and denying his brothers everything; his wife demands a copy of this important video. This other passenger turns out to be a tricky character who sells pirated videos – and claims to have got Panahi a copy of Nuri Bilge Ceylan’s Once Upon a Time in Anatolia.

But other characters succeed in raising more important ideas. A teacher and a dodgy young guy argue about how to punish criminals: he’s all for some sharia-style executions; she demands mercy and points out that no one is born a thief. Later, Panahi will talk to a friend who has been attacked in his shop – the man shows him the CCTV footage on his iPad – apparently for standing up for a man and woman who had been caught stealing money. And finally Panahi picks up a friend who is a lawyer, disbarred from practising her trade, in the way that he has been barred from film-making. They discuss the case of Ghonsheh Ghavami, the Iranian woman jailed for trying to attend a men’s volleyball match. Panahi maintains a smilingly fatalistic attitude to all this.

The crucial moment comes when Panahi’s feisty niece reveals she has to make a short film for a school project; she accidentally films a boy taking money that isn’t his and dramatically intervenes in the situation. Could Panahi be playfully showing the authorities how film-makers are a force for good? She informs the bemused Panahi that her teacher has given her rules for making a film which is “distributable” in Iran: at all costs you must avoid “sordid realism”. It’s advice that will amuse any follower of the kind of Iranian film which has found favour on the foreign film-festival circuit – they do indeed, mostly, avoid sordid realism, and offer coded commentary couched in childlike fables. However, Panahi’s films have not avoided realism.

Taxi grew on me. It is not as angry and painful as his previous work, the samizdat This Is Not a Film, but it is subtle, humorous and humane. It tells you more about modern Iran, I think, than you’ll discover on the news.

The Berliln Film Festival jury was presided over by the American director, Darren Aronofsky. Other jurors were the German actor Daniel Brühl; the South Korean director Bong Joon-ho; the American producer Martha De Laurentiis; the Peruvian director Claudia Llosa; the French actress Audrey Tautou; and Matthew Weiner, the creator of the American television series Mad Men. Kino Lorber has just aquired  North American rights to the film and "Taxi "will be released theatrically in the US in the autumn.