It's clear that President Obama out-organized his opponents in both of his runs for president. But how did he do it? Elizabeth McKenna and Hahrie Han, in Groundbreakers, shows us how. As Andrew Mayersohn notes in this review, "giving people meaningful responsibilities is a powerful way to engage them and keep them engaged." This is a vital lesson in politics, one that Team Obama, in two national campaigns, realized with spectacular results. 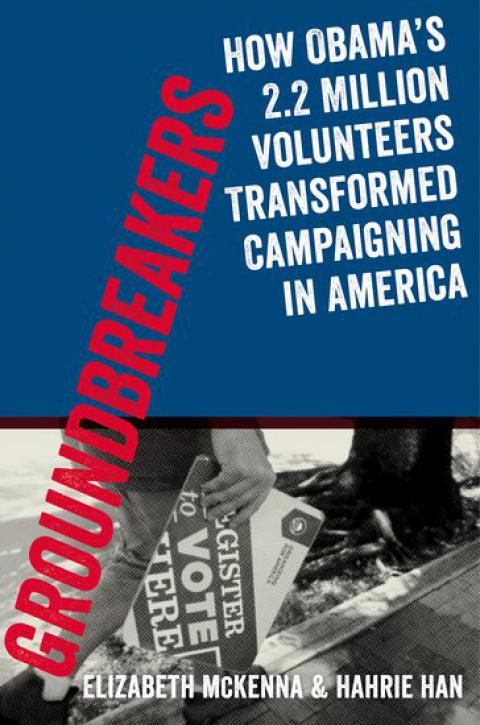 Learning from Obama's Campaign
Andrew Mayersohn
Share on facebookShare on twitterShare on emailShare on printMore Sharing Services
March 17, 2015
The 2016 cycle has begun in earnest, bringing with it speculation about which candidates will be able to capture the supposed magic of Barack Obama’s small-dollar donor base, big data analytics, and electrifying speeches. While all of the above deserve some credit for Obama’s success, their role is often overstated. In Groundbreakers: How Obama’s 2.2 Million Volunteers Transformed Campaigning in America, Hahrie Han and Elizabeth McKenna present a great corrective to some of the myths about Obama’s success.

Han and McKenna have written a history of the Obama campaign in which the candidate himself has little more than a cameo. Obama For America’s famed fundraising operation and formidable web presence play only supporting roles. John McCain and Mitt Romney have a combined total of seven mentions in the index. Instead, as the title implies, Han and McKenna tell the story of the organization—from top political operatives to field staff to dedicated volunteers—that ran the biggest voter contact operation ever seen in 2008 and then repeated the feat four years later.

While many modern campaigns rely on volunteers for little more than routine door-knocking, the Obama campaign adopted a “relational organizing” model in which volunteers took on progressively greater responsibilities, recruited friends and neighbors, and headed neighborhood teams. To paraphrase the old joke about spies (Q: What do spies do? A: Spies spy on spies), a true organizer is someone who organizes organizers, convincing friends, neighbors, or even strangers to adopt the cause and proselytize for it. Staffers stood at the center of this web of relationships, called “snowflakes” by the campaign, connecting it to the larger campaign but not managing it hierarchically.

Groundbreakers is thus an excellent introduction to the practice of organizing, which is an extremely underappreciated facet of American politics. McKenna and Han delve into the roots of this model: decades of community organizing by groups like the Industrial Areas Foundation, the renewed progressive interest in the “ground game” surrounding Howard Dean’s 2004 presidential campaign, academic theorists of organizing (such as Harvard’s Marshall Ganz, who developed the snowflake model). They also detail the day-to-day tactics involved, combining the perspectives of the campaign’s Chicago headquarters and its boots-on-the-ground in rural Ohio.

This view of the campaign puts Obama For America’s digital prowess in perspective. As Han and McKenna note, a “campaign” is itself a military metaphor, so it is apt to say that Obama’s small donor machine and analytics operation were force multipliers. The small donations (which only ramped up after Obama had established his viability with the help of plenty of traditional major donors) allowed OFA to support its massive staff, while the analytics helped the campaign zero in on the best targets for high-quality, person-to-person voter contact.

The crucial difference between relational organizing and traditional campaigning, the authors argue, is as much its lasting impact on its participants as the results it gets on Election Day. Here, their case study approach pays off by demonstrating just how many of those 2.2 million groundbreakers were empowered by the experience of being given real responsibility. Contrast this to most modern advocacy, in which organization members exist primarily to take one-time actions (signing a petition, for example) or to make donations that support a professional staff that does the real work.

While Groundbreakers is full of evidence that relational organizing powered the Obama campaign’s voter contact operation to incredible heights, McKenna and Han offer surprisingly few specifics about how, exactly, the Obama campaign “transformed campaigning in America.” This discussion is limited to a few pages in the last chapter and some scattered mentions of other campaigns and advocacy group copying Obama’s tactics. This is less a criticism of Groundbreakers, which is primarily an organizational history and sociology of OFA and not an all-purpose history of campaigning, than of a subtitle that overpromises.

While voter contact and the vocabulary of organizing probably feature more prominently in political discussion today than they did before 2008, hard proof that major campaigns have changed substantially is difficult to come by. By my analysis of Center for Responsive Politics data, the Obama campaign spent 7.4 percent and 8.8 percent of its budget on personnel in 2008 and 2012, respectively. While small relative to its gargantuan media spend, that was more than enough for OFA to outman the McCain and Romney campaigns. Obama’s success, however, does not appear to have inspired other candidates to cancel ad buys and spend the money on staff: personnel spending as a fraction of all federal campaign spending has been flat since CRP’s data begin in 2002, fluctuating between about 9 percent and 12 percent, with the 2014 cycle just over 11 percent. (These numbers are higher than OFA’s figure because smaller congressional campaigns need to spend more proportionally to field a full staff.) Of the hundreds of big-budget campaigns since Obama’s first run, very few appear to subscribe to the gospel of person-to-person contact.

The picture doesn’t change if we focus on the outcomes of campaigns rather than their inputs, since the 2014 midterms saw the lowest turnout since 1942. For all the stories that were written about the renewed focus on the ground game in advance of the elections, actual evidence of stepped-up voter contact is difficult to come by. Political scientists David Broockman and Joshua Kalla have demonstrated that voters who have high-quality conversations with canvassers tend to recall them, yet only 21 percent of potential voters in a “hotly contested Midwestern gubernatorial race” reported having been canvassed in 2014. If campaigns had been willing to divert even a fraction of their massive budgets to staff, Broockman and Kalla write, “campaigns could have had a 20-minute conversation with every single registered voter in a state with a close Senate race—and still afford to blanket the airwaves with ads.” Whatever the reason—self-interested campaign consultants, distaste for the hard work of organizing, fear of change—it seems that campaigns are mostly not emulating the tactics that McKenna and Han describe.

Circa 2009, it seemed like the Obama phenomenon had the potential to transform governing as well as campaigning. Between the elections and since 2012, Obama For America transmogrified into an advocacy organization (first called Organizing For America, then Organizing For Action) intended to capitalize on the massive mobilization described in Groundbreakers, keeping supporters engaged and holding Obama’s legislative opponents accountable. That hope only partially materialized; despite tens of millions of dollars raised, it is hard to identify the concrete accomplishments of OFA, which is currently outranked on Google by the Orthopedic Foundation for Animals. That’s my impression as an outsider, anyway; if Han and McKenna had pursued the question, I would have been interested to read Obama veterans’ opinions about why OFA failed or how it succeeded.

To paraphrase a slogan popularized by Occupy Wall Street, the Obama campaign depicted in Groundbreakers is “what democracy looks like”—for better or worse. On the one hand, the campaign was ultimately a top-down operation, funded mostly by large checks and devoted solely to the election of a candidate who was bound to disappoint some of his most fervent supporters. On the other hand, neighborhood-based squads of volunteers holding house meetings and recruiting their friends are as realistic an approximation of participatory democracy as you’re likely to find—examples of the world-changing “small groups of thoughtful, committed citizens” from the possibly apocryphal Margaret Mead quote. Perhaps the campaign’s most important lesson, then, is that giving people meaningful responsibilities is a powerful way to engage them and keep them engaged; this is the insight behind some of the most promising civic innovations of recent years, such as participatory budgeting. If we are ever going to have a more active and representative political culture, political actors and ordinary citizens alike will have to start taking some cues from Groundbreakers.