Coney Island's standing for some 147 years as inspiration for artists, from its inception as an elite seaside resort through its days as an entertainment mecca and leisure refuge for New York's working people, up to its more recent decline and the closing in 2008 of Astroland, its last iconic amusement park. 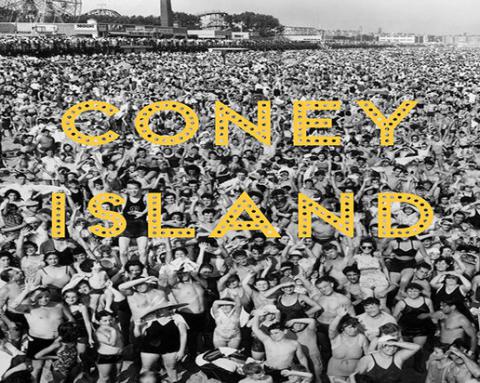 There may be no five-mile area in the United States that better captures the nation's democratic spirit than New York City's Coney Island. Coney Island came to symbolize America's working-class dreams, growing ethnic and racial diversity, love of amusement, and the dreams of love that crossed class lines. Coney Island's 150 -year history has cried out for a profound assessment of its cultural, social, economic, and artistic legacy. Now, in Robin Jaffee Frank's remarkable Coney Island: Visions of An American Dreamland 1861-2008,  we have such an appraisal.

In November 2012, I reviewed Circus and the City: New York: 1793-2010. I wrote that I had no idea how the authors "assembled all of the historic posters, photos, games, and other circus memorabilia included in this book, but we should all be thankful they did. "

Now we can again thank Yale University Press for another definitive book on a key part of the American experience. Frank's extraordinary collection of Coney Island materials included in this volume will fulfill and likely exceed the wildest hopes of all Coney Island lovers. This book wonderfully captures the spirit of a place that represents a vital and unique chapter in the American story.

You do not need to have visited Coney Island to relish this book. If you are interested in the carnivalesque side of American culture, Frank's work will leave you cheering with appreciation.

Coney Island of the Mind

Coney Island was always more than an amusement park. Unlike Disneyland, it has no admission fee. In fact, New Yorkers' ability of to reach Coney Island via a 5 cent subway ride (as opposed to the private car ride required to reach Jones Beach) was a major reason millions went there to escape the city's summer heat (Coney Island became known as "The Nickel Empire.")

Coney Island holds a unique place in American history, and in the nation's imagination, precisely because it was open to all. It became a working-class symbol of the American democratic spirit because it was where the New York City working class came to have fun. And not just the white working class. As many paintings in the book by Reginald Marsh and others show, African-Americans were part of the Coney Island scene. Marsh and others routinely painted African-Americans on the borders of their works, reflecting the artists' recognition of the group's social marginalization.

Robin Jaffee Frank, the book's author, is chief curator of American Paintings and Sculpture at the Wadsworth Atheneum Museum of Art. This book is connected to a museum exhibition opening at the Wadsworth and then travelling to San Diego and Brooklyn. Frank's nuanced assessments of Coney Island paintings and banners from the 20th century through today alone make the book a must read. For example, I am a huge fan of Reginald Marsh, and own the leading book on his paintings. Yet Frank repeatedly found socially and politically significant features in Marsh's Coney Island paintings that I had always overlooked. Reading this book is like walking through a museum with the leading expert on the exhibit at your side.

Coney Island was first and foremost a beach. The intense density of New York City housing was reflected in a beach scene where finding space for a towel on a busy day was not easy. The book's cover of Weegee's legendary 1940 photo of a million people at Coney Island reflects a beach experience very different from that in Southern California. California's spread out housing landscape is paralleled in people at beaches placing towels a comfortable distance from others; but New York City residents living in dense tenements were also tightly packed in at Coney Island's beach.

Coney Island was also a boardwalk. The 5 cent subway fare that brought millions to the beach also enabled them to observe all of the area's activities for no additional charge. The boardwalk was as crowded as the beach. In this pre-cellphone era, the risk was always there of becoming disconnected from their friends or family (films set in Coney Island often show this disconnection, as occurred in the highly recommended 1941 film, The Devil and Miss Jones).

Coney Island also housed amusement parks and sideshows. Frank points out that paintings and photos of Coney Island in its 1920's-40's heyday often shows crowds outside rides and sideshows because most could not afford to pay to gain entry. Carnival barkers were everywhere and even became subject to regulation. This was an era where people with physical disabilities were put on display. There were banners advertising Quito the Human Octopus, Jeanie the Living Half Girl, and Smoko the Human Volcano. Little people were a particular Coney Island feature and hundreds lived in a village on site. Coney Island even included animals. The legendary Topsy the Elephant was publicly electrocuted in 1903 by Thomas Edison in a killing approved by the Society for the Prevention of Cruelty to Animals.

What distinguished Coney Island from anywhere else during the pre-WWII years were its rides. The Wonder Wheel, the Steeplechase, the Chutes and The Human Roulette Wheel were but a few of the amusements-in multiple, independent parks- that brought people to Coney Island. Coney Island provided thrills that could not be found elsewhere, and its diverse combination of rides, circuses, carnival sideshows, magicians and more is unprecedented in United States history

Most of us missed Coney Island's heyday. I first saw it in 1972, nearly two decades past its prime (fortunately, the must see 1953 film Little Fugitive captures the park's spirit just prior to the decline. Both it and the Devil and Miss Jones are out on DVD.). Coney Island visitors originally fell off due to the rise of rival entertainments like television. The 1950's economic boom facilitated car purchases, so that working people once limited to Coney Island due to subway access now drove to Jones Beach or the Playland at Rye Beach (which also had amusements and a boardwalk).

Unlike Disneyland, Coney Island was part of a real city. A neighborhood in Brooklyn, it was not a specially protected antiseptic environment that rigidly controlled its visitors. Doors to Coney Island amusement parks could be locked, but New York City's growing racial and economic problems impacted the Coney Island experience.

Yes, Coney Island has a "cloak of danger" not present during its heyday. But Coney Island remains an island of authenticity in a rapidly changing New York City. As Charles Denson states in the book's closing essay, "As New York gentrified during the 1980's, Coney Island was seen as the last vestige of the real city; its grittiness and the diversity of its visitors become the draw."

Having spent my own entire career in San Francisco's Tenderloin neighborhood, I've seen Denson's description of Coney Island frequently applied to our community. Both neighborhoods serve as antidotes to their city's many now sterilized attractions.

A single review cannot capture the extraordinary richness of Frank's book. And it would take a review twice this length to come close to relating the gems contained within its pages.

I cannot think of any recent work that better captures the 20th century history of urban working class America. At only a $50 retail price, the book is worth buying for the photos, paintings, banners and Coney Island memorabilia alone. Yale University Press has priced the book so low that after reading their copy many are likely to order multiple books for friends and family.

Thanks to Robin Jaffee Frank and her colleagues, a mass audience can now see over a century of cultural and artistic visions of Coney Island. This book offers the tribute to Coney Island that it richly deserves, placing what many still erroneously see as merely a beach and amusement park at its rightful place at the center of the American experience.

[Randy Shaw is the Editor of Beyond Chron and the Director of San Francisco's Tenderloin Housing Clinic, which publishes Beyond Chron. Shaw is the author of four books on activism, including The Activist's Handbook: Winning Social Change in the 21st Century, and Beyond the Fields: Cesar Chavez, the UFW and the Struggle for Justice in the 21st Century. His new book, The Tenderloin: Sex, Crime and Resistance in the Heart of San Francisco, will be out in April.]